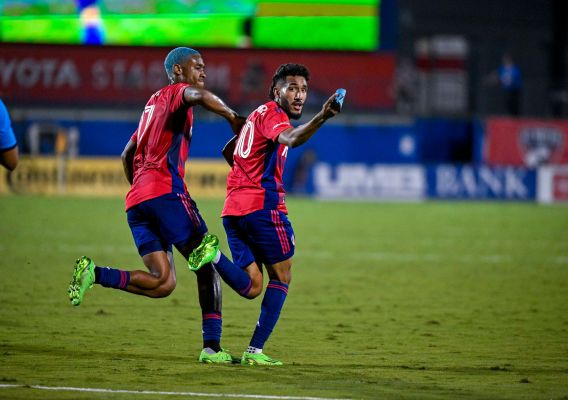 Philadelphia Union are the best team in the league and right now, they look unbeatable. Meanwhile, Chicharito might have cost the Galaxy - big time, Columbus needs work but the upside is there, LAFC continues to underperform, the Red Bulls overperform, and Jhon Duran is one of the league's best youngsters. ASN's Brian Sciaretta offers up all of his thoughts on the weekend in MLS
BY Brian Sciaretta Posted
September 12, 2022
3:00 PM

As opposed to a more winding column really getting into the nitty gritty of it all, here are some quicker observations I had from the weekend games – and just as an FYI, I was at the Philadelphia Union game on Saturday where they demolished Orlando 5-1, so I have a bit more to say about that game.

After it seemed like a foregone conclusion that LAFC was going to win the Supporters Shield, Philadelphia has now moved atop the Shield table after its 5-1 win over Orlando and the LAFC loss to Dallas.

While LAFC has played one fewer game, and winning that game would pull it even on points with Philly with LAFC having the tiebreaker in wins, why would anyone bet against Philadelphia? LAFC has talent but they are slumping. The Union are destroying everyone.

Steve Cherundolo hasn’t been able to make the most use out of his team’s talent. The team made a bunch of moves and everyone knows about adding Bale and Chiellini. But they also lost players and identifying roles among the players they now have hasn’t worked out.

Philadelphia’s final three games (at Atlanta, at Charlotte, home against Toronto) are all against teams that are not in the playoffs.

The Union also have two of the three hottest players in the league right now in Mikael Uhre and Daniel Gazdag (the other is Hank Mukhtar) and then they have a system where players know their roles and know how to help the team.

Look at Leon Flach. He’s probably not an ideal fit in every system but his defensive presence is perfect for Philadelphia. He puts in fantastic defensive shifts every game. Jose Martinez and Alejandro Bedoya are also perfect for the system.

Philadelphia is a team no one wants to play against and their commitment to defense is ideal.

As for Orlando, they’re just the latest victim of the Union. Their playoff chances remain solid but their heads were probably still celebrating the U.S. Open Cup win.

I was really impressed with the way FC Dallas played against LAFC, despite playing most of the match up a man after the Ryan Hollingshead red card. They attacked, drew fouls, and played smart soccer. Jesus Ferreira scored twice and now has 18 goals. But the U.S. national team attacker played well in all facets.

Also, the crowd was as energic as I've seen for awhile in Frisco. The team has connected with the city well this year and they're an fun to watch team.

LAFC, as I mentioned earlier, is making too many mistakes these days. They'll still be a tough out in the playoffs but this is not the team everyone expected.

Does Seattle have a shot?

The Sounders defeated Austin FC 3-0 for their second straight win. Seattle played like they did during their CCL run. Jordan Morris exploited space, Raul Ruidiaz finished his chances, Nicholas Lodeiro was in good form. It's their typical formula.

For Seattle, it's a tough climb and their odds are still well below 50-50. But they're in better shape now than before the weekend started.

Sitting in ninth place and having to climb to at least seventh, Seattle trails the eighth place LA Galaxy by one point, seventh place RSL by four points, and sixth place Minnesota United by five points.

But Seattle is gaining momentum. Neither of those three teams they're chasing have won in their last two games. Seattle has won two straight.

Seattle has a manageable schedule. Two road games against non-playoff teams. Cincinnati at home is tough but a closing game against San Jose is winnable if it comes down to the wire.

Luck is also breaking the Sounders way. Chicharito blows a penalty for the Galaxy to settle for a draw, RSL doesn't defeat DC United at home, Minnesota United has been shut out three straight games.

If Seattle can get nine points from their last four games, I like their changes.

As for Austin, they have now lost three in a row and are playing poorly (and much closer to the second year team people were expecting). Is this a slump or is this a case of them returning to their level after punching above their weight all season? It's a bit of both but closer to the latter.

Portland is once again playing well at the end of the season. It is typical of the team under Gio Savarese. Portland looked far from the team that hosted MLS Cup last December and looked far from a playoff team. But Eryk Williamson returned from injury, the team clicked, and the team has lost just two of 16 games since June.

In the 1-0 win over Minnesota on Saturday, Portland played very well. It's night and day from earlier in the season. If Portland is playing in MLS Cup again, I wouldn't be surprised.

The Galaxy were lucky to earn a point at the end when a Walker Zimmerman handball gifted the Galaxy a penalty at the end of a 1-1 draw. Riqui Puig converted but the Galaxy walked away from the game feeling like they lost points after Chicharito missed another penalty (he's converted less than 50% of his attempts this year). Victor Vazquez wanted to take it but Chicharito overruled him.

The Galaxy have the talent, but their chemistry seems off.

As for Nashville, I still like where they stand. It was a tough call on Zimmerman, who was good in this game until the handball. The team has a good defense and the best player in the league. In the post season, I like their chances.

The Columbus Crew were playing a great match away against Montreal up 2-0, before going down to 10 men and surrendering two late goals. Both via deflections.

Columbus has been among the worst in the league in blowing leads. This one was very unlucky, but it fits the trend. A draw in Montreal should not be disappointing, but this one was for Columbus.

I don't think we'll see many surprises in the East for the playoff races. I think the top seven teams now will be the seven teams that go to the playoffs. That includes Columbus.

Columbus doesn't seem that far away from being a very good team. But the no one wants to face Cucho Hernandez and Lucas Zelarayan in the attack, but for whatever reason they can't seal the deal.

Columbus is similar to Nashville. They have the right elements but aren't gelling. They're also not far off and it is not impossible to see them making a run in the playoffs either. But that's up to Caleb Porter to get this team playing up to the sum of its parts.

The Red Bulls are an intense team and where as teams like Columbus, the Galaxy, or Atlanta are underperforming with the talent on their roster, the Red Bulls are overperforming. This is a team that doesn’t have a good forward on the team, it has good but not great midfielders. It’s backline is solid but overall, the roster is good but they don’t have a star player in the mold of the Crew or the Galaxy.

Lewis Morgan has been a terrific acquisition and fits great into the system. Cristian Casseres is a notoriously hard working midfielder, and Luquinas is coming out of his slump. Gerhard Struber has his team giving big efforts and working very hard. It’s intense soccer and it is working out for them.

Cristian Casseres Jr. with the response!

This one's level at 1-1. pic.twitter.com/gFC2medwlB

I still think it will be hard for the Red Bulls in the postseason. At that time of year, every team raises their game. And with the intensity leveling out, it comes down to talent. I am not sure the Red Bulls have the difference makers that often determine postseason success.

Jhon Durán scored his fourth and fifth goals of the season for Chicago in a 3-1 win over Miami. At 18, he looks like one of the league’s best young stars and should feature heavily for Colombia’s U-20 team in February at the South American U-20 championships (if Chicago releases him).

Another one for Jhon Duran! That's 3-1 for @ChicagoFire! pic.twitter.com/wwdLqbD7ba

Toronto fell to Atlanta 4-2. A lot of work is ahead for both teams – who have each spent a ton of money  but need work on defense, chemistry, and depth. While Toronto lost this game, if Bob Bradley can straighten out the defense, the team could compete next year. Atlanta looks further off and its problems seem deeper, despite this win. If Miles Robinson doesn’t return to his preinjury form, they’ll have even more work to do.

Matai Akinmboni became the third youngest player to play in MLS as Wayne Rooney gave him the nod in the club’s 0-0 draw with RSL before taking him out at the half. Rooney spoke about the 15 year old central defender after the game and stressed that he made a positive impression despite the first-half removal.

Wayne Rooney talking about the decision to give a DC United debut to central defender Matai Akinmboni who is just 15 (2006-born). The Maryland native played the 2nd half last night in a 0-0 draw with RSL. Rooney with some encouraging words pic.twitter.com/V9YS2x5Npp

NYCFC fell to Charlotte 1-0 in North Carolina. They’re likely in the playoffs but there is a very good chance they continue to tumble to the point where they won’t host a playoff game. This team just hasn’t figured it out since Nick Cushing was hired as the interim head coach and Taty Castellanos was sold. They won the title last year, came up short in the CCL, and now 2022 is just paying off the bar tab until they get back to the drawing board.