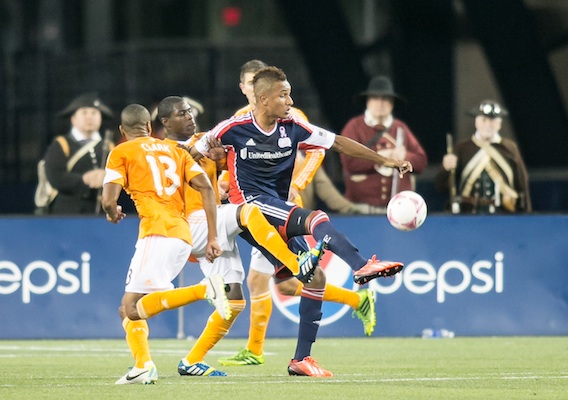 With Major League Soccer playoffs ramping up and a full schedule of club matches abroad, this weekend offers a huge variety of U.S.-centric soccer on TV. Here are our recommendations.
BY Christopher McCollum Posted
November 01, 2013
2:24 PM
JURGEN KLINSMANN'S roster announcement for the European friendlies is coming up, and there are several players on TV this weekend who will be hoping to receive a phone call. There are even more players eager to get an invitation to the January training camp. The theme of time running out once again rears its head, as there are only two games left this year for several U.S. national team hopefuls.

With just two games left in the 2013 Apertura and Tijuana all but eliminated, attention turns toward individual performances. These last two weeks provide opportunities for Joe Corona, Edgar Castillo, Herculez Gomez, and maybe even Paul Arriola to catch Jurgen Klinsmann's eye. Strong recent performances from the likes of Mix Diskerud, Alejandro Bedoya, and Aron Johannsson must be on the minds of Corona and Gomez at this point.

Hull City v. Sunderland
11:00 a.m.
NBC Sports Live Extra
Sunderland was stirred from its seemingly eternal slumber last weekend against arch-rivals Newcastle, and there's even a bit of optimism surrounding the club. Led by the strong play of Jozy Altidore, the Black Cats seem to have found a spark. Playing against Hull City this week will be a good opportunity to keep the momentum going, and we'll be looking for the streaky Altidore to enjoy a breakout game against his former team. New England Revolution v. Sporting Kansas City
8:00 p.m.
NBCSN
It's playoff time, which is a reason to watch in and of itself. For Kelyn Rowe, Benny Feilhaber and Juan Agudelo, however, there's even more on the line as these players look to earn invitations to the January training camp. Also: Can Juan Agudelo make a positive impact before saying adios to MLS and arriving at Stoke City? Should be interesting.

Montpellier v. Nantes
11:00 a.m.
beIn Sport
While Alejandro Bedoya's playing time has been bouncing up and down, this results on the field are working in his favor and pushing for him to have a more consistent role. Two game-winning goals in his last two games—one league and one cup—should be pushing him up the pecking order. Playing against 15th place Montpellier, he will probably get more playing time this weekend. Houston Dynamo v. New York Red Bulls
3:30 p.m.
NBC
Houston knocked off Montreal in the play-in game and will now face Supporter's Shield winners New York. Dom Kinnear has an uncanny knack for navigating his team through the post-season, and with Ricardo Clark and Will Bruin firing on all cylinders, New York needs to be wary going into Texas. For the Red Bulls, it may be now or never. The best record in the league gets them into the CONCACAF Champions League, but the team wants want a title. If not this season, then when? Houston is the first test to see if the playoff curse can be broken. What will you be watching this weekend, and why? Tell us in the comments.