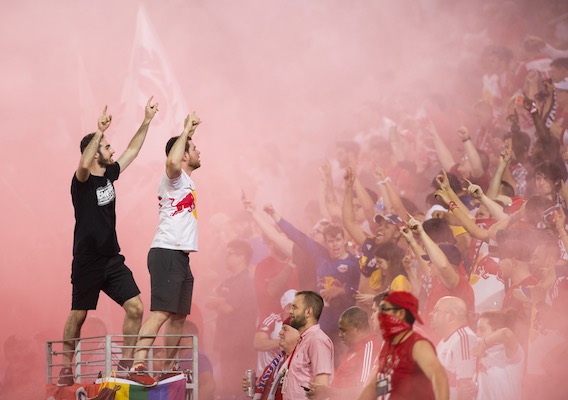 Playoff Picture Will Come Into Focus This Weekend

ASN's Franco Panizo catches you up on Major League Soccer's midweek action and tells you everything you need to know about the weekend slate of games—including several with playoff implications.
BY Franco Panizo Posted
September 29, 2017
11:00 AM

FC DALLAS IS BACK in the win column and back in the playoff picture in the Western Conference. Maintaining that status will require more from the club, however.

On Wednesday FC Dallas snapped a 10-game winless run that stretched nearly two months, defeating the crummy Colorado Rapids, 2-0, at home. The victory came courtesy of goals inside nine minutes from Maynor Figueroa and Roland Lamah and surely lifted a weight off of Dallas’ back. But Oscar Pareja’s side was not overly convincing in the match at Toyota Stadium.

On Saturday FC Dallas must pay a visit to an Orlando City team that is coming off a major high after routing the New England Revolution, 6-1. Kaka, Dom Dwyer, and Yoshimar Yotun helped lead the way for the Lions in that lopsided victory, but the play of the aging Brazilian superstar was most noteworthy given his struggles this year.

Kaka bagged a brace in his first start for Orlando in four matches, and he looked lively throughout. It is true that he benefitted from the extra space that was provided by the mind-boggling ejection of New England midfielder Xavier Kouassi (wasn’t Video Review supposed to limit bad calls?) in the 11th minute, but Kaka still showed some quality and that he has something left in the tank.

Slowing Kaka down will be a key objective for Dallas, whose defense has been disappointing since late July. On the other end, Maximiliano Urruti will need to either end his six-game scoreless streak or other players will have to step up and score, like they did on Wednesday, to give FC Dallas an opportunity of remaining in a postseason position. Both the Houston Dynamo and San Jose Earthquakes are within striking distance of Dallas, so the pressure is still very much on.

WHEN WILL IT STOP?

Things just keep getting worse and worse for the New York Red Bulls.

Wednesday saw the club suffer its latest blow, as a stoppage-time own goal from Fidel Escobar forced the Red Bulls to settle for a 3-3 home draw with rivals D.C. United. The result left New York winless in seven matches, and kept the team from creating distance between itself and the Montreal Impact for the final playoff spot in the Eastern Conference.

Next up on the schedule for the Red Bulls is a Saturday showdown against the best team in the league, Toronto FC. The Canadian side will welcome New York to town this weekend, and is going to be more than eager to pick up a victory in front of the BMO Field faithful after losing its last two fixtures, including a 5-3 home loss to Montreal.

The good news for Red Bulls head coach Jesse Marsch is that midfielder Daniel Royer is back in the mix. Royer made his return from injury on Wednesday by coming off the bench, and showed positive things during his 15 minutes on the field. It might be too early to throw him back out into the starting lineup this weekend, but his reintroduction to the fold is a plus for a team that still relies far too much on Bradley Wright-Phillips to carry the scoring burden.

If role players can step up the way that teenager Tyler Adams did on Wednesday—he score an impressive brace—New York could add to Toronto’s recent woes. If they do not and Wright-Phillips is left to do all the work inside the 18-yard box, the Red Bulls’ poor run of form is likely to continue.

The Royal Rumble-esque battle for the top spot in the Western Conference continues—and this weekend could provide clarity regarding the No. 1 seed.

Third-place Sporting Kansas City is set to lock horns with current leaders the Vancouver Whitecaps at Children’s Mercy Park on Saturday night, and the match is sure to be intense given that only one point separates the two teams. Kansas City has the advantage not only because it will be playing in front of its supporters, but also because Vancouver had a midweek game.

The Whitecaps suffered a 3-0 road loss to the Seattle Sounders two days ago, and now have to find a way to bounce back on short rest. Attackers Fredy Montero and Christian Bolaños will need to do a better job of creating in the final third to avoid being shut out in consecutive matches.

The Sounders and Portland Timbers will be keeping a close eye on how that game finishes, as either could each potentially jump into first place this weekend. They would have to win on the road, of course, but that is doable given that Seattle is playing the reeling Philadelphia Union on Sunday and Portland is facing the inconsistent San Jose Earthquakes a day earlier.

Ignacio Piatti just got a new deal from the Montreal Impact, and now needs to repay the faith in him with a big performance.

Piatti signed a contract extension with the Impact on Thursday, and the club will be hoping that he responds by leading it to a much-needed win in Saturday’s match against lowly Colorado. Montreal suffered a 1-0 home loss to New York City FC on Wednesday that could have crushed the Canadian side’s playoff aspirations, but the late draw the Red Bulls settled for with D.C. kept the Impact four points behind in the playoff standings.

Losing again would seriously damage Montreal’s chances of playing beyond Week 34, especially since New York has a game in hand, but a win could give Piatti and his teammates the on-field lift they need for the final month of the season.

KEEP AN EYE ON…

U.S. men’s national team head coach Bruce Arena said this past Tuesday that he does not have the luxury of bringing in new faces for next week’s World Cup qualifying camp, and that means that plenty of attention will be on the regulars who compete in MLS.

Players like Toronto’s Michael Bradley, Seattle striker Clint Dempsey, and Matt Besler of Sporting Kansas City are all aiming to head into the October qualifiers with strong outings at the club level, but the most interesting national team-related subplot to follow is how Tim Howard and Brad Guzan fare in this final weekend of September action.

Howard and Guzan split the goalkeeping duties in this month’s qualifiers, and the battle for the U.S. starting job seems to be wide open given Howard’s recent (and eye-opening) struggles and Guzan’s solid outings for Atlanta United.

The two veteran netminders have taken turns holding the No. 1 spot in recent years, and who performs better at the end of Week 30 could end up deciding who gets the nod in next Friday’s World Cup Qualifier against Panama.