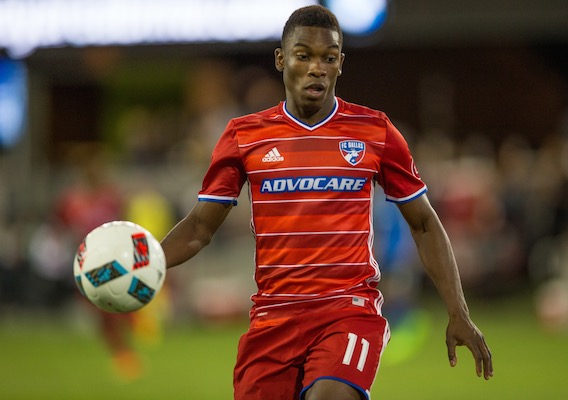 I DON'T OFTEN SAY THIS, but Major League Soccer just produced a great weekend of soccer. The on-the-field product was of high quality, the games were intense, the atmosphere was downright European, and Fabian Castillo's assist on Maxi Urruti's goal was perhaps the finest play in league history.

This is what Don Garber wants. You want young players stepping up to make names for themselves. That happened in droves this weekend and the highlights are there to prove it. It was not a perfect weekend (thanks Real Salt Lake and New England), but the good far outweighed the bad.

How good was Fabian Castillo’s assist on Saturday night? It was unbelievably good. It is worthy of being put in a time-capsule to preserve for future generations many years from now. In fact, the only play that rivals it was Clint Mathis’ goal on April 28, 2001 against the Dallas Burn.

After taking the ball down the sideline wide left, Castillo absolutely embarrassed two Chicago defenders to move into the box. He then delivered a rabona cross with perfection to Urruti, who headed it home with authority.

Castillo, 24, has been a wonderful addition to the league and is easily one of the best players to ever play here. He is now part of an FC Dallas team that is the odd-on favorite to win the Supporters Shield.

What’s not to like about FC Dallas? That organization churns out high numbers of young prospects via its academy, plays attractive soccer, and is willing to spend DP money on young players.

On a side note regarding FC Dallas, Matt Hedges continues to build a strong case as the most overlooked American player for the U.S. national team. His one cap does not reflect a player who has been the best American central defender in the league over the past two seasons. Just this year he has eight clean sheets in 14 appearance for the club.

Every soccer fan on earth has heard of David Villa, Andrea Pirlo, and Frank Lampard. Only a small fraction have heard of Jack Harrison and Tommy McNamara.

While the three designated player giants have done very well the past two months, New York City FC would be lower in the standings if not for Harrison and McNamara. Both players showcased themselves very well in New York’s 3-1 win over Montreal on Sunday.

Harrison, 19, has three goals and two assists in eight games since being cleared to play following his hip injury. He has easily lived up to the hype that comes with being a first overall pick in the SuperDraft.

Just watch Harrison’s skill on display on Sunday when he scored just before the halftime whistle to give NYCFC a 2-0 lead on Montreal. His first touch was perfect. That set the stage for an incredible dribbling display to get past Montreal’s Ambroise Oyongo and into a good position for a shot. He the finished it with a bending left footed blast past Evan Bush.

Meanwhile, McNamara has been first-rate this season and with two assists against Montreal, he now has eight on the season to go along with three goals. The New York native’s assist on Villa's opener was first-rate.

Portland has been erratic in its defense of MLS Cup, but on Sunday Caleb Porter’s team defeated Seattle 3-1 in convincing fashion. Following the game, Porter said it was the best game of the season and he attributed that to the team finally having its core together and healthy.

Diego Valeri was the man of the match with two goals. His second goal made for some discussion as to whether or not he meant to cross or shoot. Either way, it was pretty.

The win put Portland back on the inside of the playoff positions and Porter stated confidently that he believes that performances like Sunday’s will be more of the norm moving forward.

Meanwhile for Seattle, the setback followed its stunning 5-0 win over an FC Dallas team that sat most of its regulars. Clint Demspey was suspended for the game after earning a red card against Dallas. Seattle has struggled mightily without the U.S. international and that trend continued against Portland. Jordan Morris missed a golden chance in the first half and then disappeared for the remainder of the game.

Without some major changes, it is hard to see Seattle making the playoffs.

In most American sports, whenever teams from New York and Philadelphia meet with a lot at stake, it's usually intense.

It's nice to see that this phenomenon might be spreading to soccer. On Sunday the New York Red Bulls and the Philadelphia Union played to a 2-2 draw. It was a great game to watch as a neutral fan even if fans and players from both sides are likely be disappointed.

It was a tale of two halves as the Red Bulls owned the first half thanks to two goals from Sacha Kljestan. The Union then responded with tallies of its own. While Philadelphia was reduced to 10 players in the 72nd minute after Ilson was shown a second yellow card, it was the Union that looked far more dangerous down the stretch.

Red Bulls coach Jesse Marsch once again became overly defensive down the stretch of a close game. It has proven to be costly. Last month it lost a game late to Real Salt Lake after leading 1-0 most of the way. The next game, it coughed up a late equalizer against Columbus in a 1-1 draw. Now against Philadelphia, it squandered a 2-0 advantage and was outplayed the final 20 minutes—despite being up a man.

There is no excuse for that. The Red Bulls possess more midfield talent than most MLS teams and it should be able to control a game and not have to engage in defensive tactics, like a five-man backline, to preserve a win or draw.

At least Marsch seems to realize it’s a huge problem.

“Yeah, ridiculously, I had to go to five in the back when we were up a man and I didn't feel like we could defend,” Marsch said. “So that was the only way to manage the game tactically so that we could somehow stop giving away big chances. And even with that being said, we almost gave it away still.”

This was a game Toronto FC desperately needs to forget. Even without the injured Michael Bradley or Jozy Altidore, Toronto is better than San Jose.

With the score 1-1 in the 53rd minute, San Jose went down to nine players. Toronto should have been able to pick apart San Jose with a two-man advantage. Instead, in the 70th minute, Simon Dawkins hit a 20-yard blast that wrong-footed Toronto keeper Alex Bono and gave San Jose an improbable 2-1 lead.

Over the next 20 minutes, San Jose would keep Toronto off the board and walk away with three points.

If Toronto is not careful, this is one of those games that could usher in a long stretch of poor play. It was a confidence-wrecker. While Toronto has been trying to do everything it can to be a contender in MLS, it is results like this which indicate it has a long, long way to go. It should make the playoffs but only because it is in the weaker Eastern Conference.

Will Greg Vanney’s seat get a little hot in the weeks to come? It’s possible.