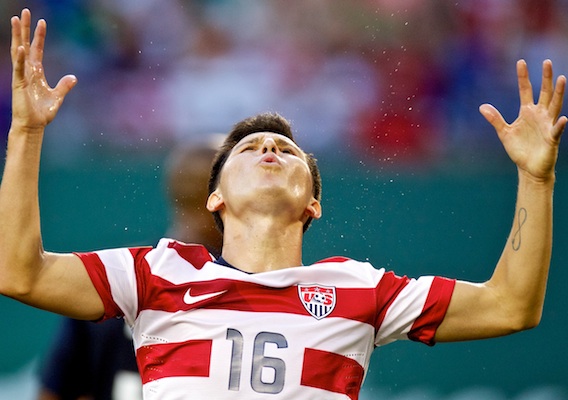 Like it when Yanks abroad score great goals? If so you're in for a treat with this edition of the ASN 100 Update. Amid the injuries and Puebla player protecting, there is some good news on the U.S. player front.
BY Josh Deaver Posted
April 01, 2014
2:58 PM
Michael Bradley—ASN rank #1
Landon Donovan—ASN rank #2
Clint DempseyASN rank #8
Reunited…and it feels so good. Check out ASN’s on-the-ground coverage of the U.S. versus Mexico friendly, including this piece from Brian Sciaretta on Bradley, Donovan, and Dempsey, who will likely start together for the first time since 2012. Mix Diskerud—ASN rank #16
Trying desperately to keep his seat on the plane to Brazil, Diskerud couldn’t have been happy about starting on the bench for Rosenborg on the Tippeligaen opening day. However, after a languid opening 45 minutes against Viking, Diskerud entered the match to an immediate impact. At 64 minutes, the 23-year-old ran onto a pass inside the box and placed a low shot far post for RBK’s first league goal of the new campaign and his first since April 2013. It’s wasn’t exactly a happy ending for the Trolls from Trondheim—the club would double the lead minutes later, only to concede twice in the final five minutes for a disappointing 2-2 draw. DaMarcus Beasley—ASN rank #18
Michael Orozco—ASN rank #47
In convening a final domestic training camp two months before the World Cup, it would be nice to have any and all players at your disposal. Unfortunately for Jurgen Klinsmann nothing has been particularly easy in recent months. Wednesday’s cash grab—er… match—with Mexico will be no different. Already without the service of his American Xolos contingent, the U.S. boss will also be forced to continue on without both Beasley and Orozco, who were reportedly denied their release from Puebla this week. Jurgen even sent off a disapproving tweet! While unfortunate for the Americans, Puebla is currently toiling at the bottom of the Liga MX table on a paltry 11 points in 13 matches. Ahead of a match with Atlas on Saturday it’s apparently all hands on deck for La Franja. Brad Evans—ASN rank #25
Tony Beltran—ASN rank #66
In this space last week we brought your attention to an underreported story in regards to the recent injury issues with Seattle Sounders midfielder Brad Evans. Fast forward a few days and...Evans was withdrawn from the U.S. training camp late Sunday night, replaced with Real Salt Lake fullback Tony Beltran, who saw time with the Americans during this summer’s Gold Cup. Evans absence also means Seattle teammate DeAndre Yedlin could see significant minutes and even get the start against El Tri on Wednesday. Jose Torres—ASN rank #30
Another week, another GOLAZO-AZO-AZO for Jose Torres. Perhaps feeling the sting of a national team snub, “Gringo” had on his shooting boots once again this weekend for Tigres UANL. In the 51st minute against Toluca, Torres found some space at the top of the box and uncorked a 30-yard rocket for Tigres’ only goal of the match. Unfortunately, the struggling club would go on to concede a stoppage-time winner, falling 2-1 to the second-place Mexican side. The goal was the third in six matches for Torres, who has managed to sneak his way back in to the first team XI on a more regular basis. (P.S. Way to stick the landing!) Luis Gil—ASN rank #36
Getting the start for Real Salt Lake in a marquee tilt against Toronto FC on Saturday, Gil put in a strong 90-minute shift and scored his first goal of the season in a 3-0 victory for RSL. After a nifty string of passes (and dummies) between Morales, Gil, and Saborio In the 28th minute, a deflected shot attempt from Chris Wingert fell to the feet of Gil who slotted it into the back of the net for his first goal of the MLS campaign. No doubt looking to prove something during his second national team call up this week, he should have some extra motivation based on recent comments from Klinsmann…


Benny Feilhaber—ASN rank #45
It was a tale of two moments for Benny Feilhaber on Saturday. After giving up a 77th-minute penalty on a rough foul to Shane O’Neill inside the box, SKC marched up the field on the ensuing restart, where a Graham Zusi cross fell to Feilhaber, who bit right back and evened the match for the defending champions. Kansas City would go on to win 3-2 thanks to a powerful Dom Dwyer strike in stoppage time. After the match Feilhaber commented on his day. "I was upset about giving the penalty away, but I’ve noticed a lot of time when people score own goals or give up penalties that they usually score so thankfully I was able to do that." Julian Green—ASN rank #55
Is this really happening? Julian Green, the coveted Bayern Munich youth prospect—once thought to be an unattainable recruit for Jurgen Klinsmann—will no doubt make his debut tomorrow for the United States against Mexico. Not to get your hopes up but I heard he’s pretty good. Here’s a piece for the stat nerds out there projecting Green to be a top 100 world player during his career. Josh Gatt—ASN rank #56
Ugh. On the mend for more than nine months, the speedy winger is back on the shelf after apparently tearing his ACL. When asked for an official diagnosis, Molde head coach Tor Ole Skullerud offered a less-than-optimistic reply. "I dare not affirm what has happened, but there is much to suggest that we get bad news here. And it is in the case tragic, simply." He added: "I cannot anticipate anything about the medical. But there are of course tough for Josh to start all over again, it is the most brutal right now. There is also a hard blow for the team." Lee Nguyen—ASN rank #59
A stoppage-time goal at Buck Shaw Stadium usually only means one thing: Goonies gonna Goonie. However, the script was flipped on Saturday night as Lee Nguyen and New England Revolution grabbed their share of late-match heroics. Receiving an outlet on a quick free kick restart, Nguyen (just back from injury) caught the Quakes defense sleeping and marched—nearly unchallenged—into the San Jose penalty box before juking Clarence Goodson and firing his shot past Jon Busch to secure the first win of the season for New England. Those announcers don’t sound like they’re having a very good time, do they? Joe Gyau—ASN rank #80
Putting it lightly, Hoffenheim II has been struggling. Since returning from the league’s Winter Break, the club has produced only two goals (and two points) in its first six matches, a factor that has kept American Joe Gyau out of this space for several weeks now. That is, until last Tuesday, when Gyau broke his team’s drought with a fantastic piece of individual skill and effort. In the 33rd minute against Eintracht Trier (~5:20 on this video), Gyau took a defender 1v1, cut quickly inside, and fired a low-driving shot from outside of the box for the game’s only goal and Gyau’s team-leading sixth strike of the season. Unfortunately, the club couldn’t capitalize on the momentum; once again being held scoreless and falling 1-0 to Kaiserslautern II on Saturday. ASN Contributing Editor Josh Deaver is a former academic turned soccer obsessive. Follow him on Twitter already.