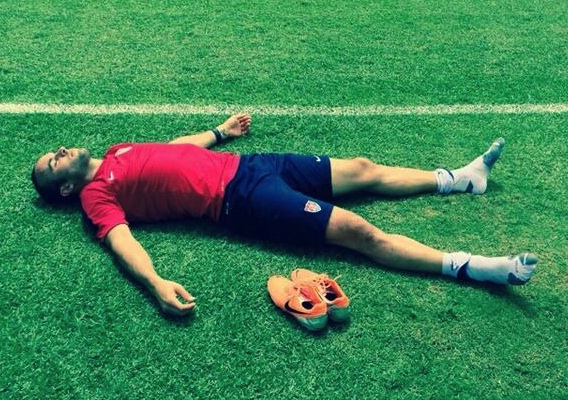 In this episode of Tweets of the Week, the U.S. national team's trip to Brazil and the MLS SuperDraft both play a leading role. Also, Juan Agudelo signs and Brek Shea goes abstract.
BY Justin Churchill Posted
January 17, 2014
1:39 PM

Safe to say that the Akron soccer program is really doing something special.

Well, he does specialize in abstract art....

I really don't know what is going on here, but look at that background behind Brad Evans.

Another reason he is the man: Two soccer references in the new Childish Gambino album.

From one striker to another....

There ya go @PaulArriola … Congrats on the goal bud.

Is LD visualizing scoring against Ghana in June?

Seems to have been a rough plane ride for the U.S. national team....

São Paulo, thank you for finally letting us enter. We are very grateful. - The Americans

There's no other club that has supported and believed in me like @stokecity FC has. #SignedToday - 6 month loan imminent #Europeanfootballer

Just getting all scientific on us? To be fair, you are crazy if you put the milk in first.

You put cereals in the bowl first, then milk. Other way round is just stupid and not cool #cerealscience

A message from Sao Paolo, Brazil, from a guy who earned his way to the 2014 World Cup.

Don't get lost on where you went in the #SuperDraft , it's your effort, attitude & how you can contribute to your team that means the most.