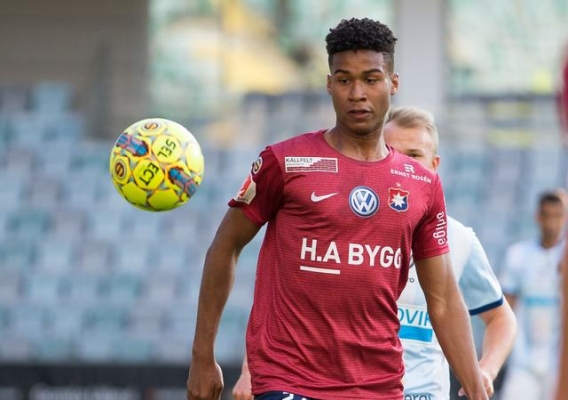 Jens Lys-Cajuste was born in Sweden but grew up in China where he first learned to play. He is now one of the brightest young players on one of Denmark's best teams but even with American citizenship since birth, a FIFA rule might preclude his USMNT eligiblity - unless he returns to the U.S. to play.
BY Brian Sciaretta Posted
August 11, 2019
2:00 PM
THE EUROPEAN SEASON is now underway throughout most of the continent, and like every season there are young players aiming to break through to make inroads as first team players.

Among American players, Jens-Lys Cajuste, who turned 20 over the weekend, is already off to a very quick start as he has earned a starting job for a FC Midtjylland squad that is expected to contend for the Superliga crown this season after finishing in second place last season.

“Absolutely it's very exciting to say the least,” Cajuste told ASN from Denmark. “It's something that I've always been working towards everyday - in practice and so. I knew the moment would have come eventually…I think Midtjylland is a club with high ambitions. At the top of the league is where is where we belong, I would say.”

In the early stages of the season, Cajuste has not only fit in for Midtjyalland but has earned rave reviews for his play as the club has a perfect 15 points from its first five games.

Cajuste cites his influences in the game as Andrea Pirlo and Sergio Busquet and it only follows that his main position is defensive midfielder playing centrally. But his versatility has also been key as Cajuste has featured as a right wingback in the early stages of this season.

Currently in his second season at Midtjylland after signing a five-year contract, Cajuste made the transition to Denmark in 2018 after previously playing for Örgryte, a Gothenburg-based club in Sweden’s second tier. But the move to Midtjylland, one of Scandinavia’s biggest clubs, was initially intimidating. But part of that transition was made easier by fellow American, Bill Hamid, who was at the club when he arrived.

“I would say that the move to one of Denmark's biggest clubs with perhaps one of the biggest [followings] in the league was a little bit scary, I must say,” Cajuste discussed. “But it turns out that I felt like it was home from day one and that I cannot take credit for that myself. That's a great credit to the coaches, to the management at FCM.”

“Of course, credit to my teammates,” Cajuste added. “Guys like Bill made my transition to Midtjylland very easy and smooth. Bill was fun. He is a great guy and a very hard worker. He's very American I would say. But he took me in and supported me from day one.”

Every American player has a unique path and a unique journey to the professional ranks. For those based in Europe, sometimes it can be an unusual path. Jonathan Amon trained at Nordsjaelland’s academy in Ghana because he couldn’t sign professionally until he turned 18. Cameron Carter-Vickers was born England while his father played professional basketball in Europe.

Among all these American players, Cajuste has had perhaps the longest journey as it has literally taken him across the globe. Born in Sweden to an American father and a Swedish mother, Cajuste’s playing days began in China – where his father’s job as a venture capitalist took the family to the city of Luoyang.

“Growing up in China was fun, lots of fun," Cajuste said. "And for starters I didn't have to go to school - which you know has to be a lot of fun for a kid. But the reason my sister and I didn't go to school in the first year was because in Luoyang in 2005, a city with six million people, there wasn't an international school at the time. And there were less than maybe 100 foreigners or so. And almost all of the foreigners living in Luoyang were teachers.”

“My parents sent me and my sister for Chinese lessons during the day," he added. "That was pretty special because the classroom was an apartment in a large residential compound. And my parents instructed the tutor not to keep us in the classroom for more than an hour at a time. During the breaks the teacher would just open up the door and let us go out and play. Most of the times there were no kids there because all of the kids were at school. But there were a lot of old retired people and you know they treated us like grandchildren - so we learned Chinese really fast.”

But Cajuste playing career would begin when the family moved a year later to Beijing and he quickly climbed the ranks of local youth teams where he would play in some of the bigger tournaments in Asia for his age group.

“It was in Beijing - that's where I started to play soccer,” Cajuste said. “And I joined two clubs - one called Sports Beijing and the other, Yueye, which basically means off-road. It was interesting. With the Sports Beijing team, we would go to tournaments in Shanghai and my parents would tell me how shocked they were to see how big the tournament was for that age. There were teams not only from China but from other countries in Asia as well.”

While Cajuste lived all across the globe – he is also very much American. He speaks English without an accent and his brother and sister currently live in Manhattan. He loves the NBA (specifically the Golden State Warriors and Steph Curry) and basketball in general. His brother, Matt Lyde-Cajuste, played college basketball for Syracuse where he made an appearance in the NCAA tournament in 2013.

Despite being busy with soccer, Cajuste has come back to the United States regularly and has family living in various places throughout the country. New York City, however, is the common meeting ground when he spends time with his family.


'99 Swedish-American Jens Cajuste has become a mainstay for Danish side FC Midtjylland. Polished on the ball and a good 1v1 defender, he has made the right mid position of their 3-5-2 his own.

Thurs he started (and performed well) in a Europa L Qualifier against Rangers. pic.twitter.com/QMoPOb5oFz

“I am the only one of three siblings, with my brother and sister, who does not live in the US,” Cajuste said. “Both my brother Matt, and my sister, Linnea, live in Manhattan currently. But ever since I was a little kid in diapers, I've spent my time visiting my relatives in the United States during summers and the special holidays like Thanksgiving and Christmas.”

Under this FIFA rule, Cajuste meets none of these requirements as his Haitian-born father acquired his U.S. citizenship via naturalization. Neither Cajuste, nor either of his parents, or any of his grandparents were born in the United States while Cajuste himself has not lived in the United States for two consecutive years.

U.S. Soccer scouted Cajuste for the most recent U-20 cycle and were impressed but eventually determined that he is not eligible as of yet. The one factor that could change that is if he returned to the United States and played with a U.S-based MLS team for two seasons (while hoping the Swedish federation stays away in the process). This would satifsfy the residency requirement in the FIFA rule. But with his career taking off at Midtjylland – a club that relies on developing and selling players, his price tag would be high.

Cajuste declines to state a preference between national teams and is instead focused on his club at the moment. He did point out that playing for the United States would be an honor, as it would with Sweden.

“I'm an American and I'm a Swede yeah and I have a very big season ahead of me in club football. I am focusing on what I can control. That's just to be the best football player that I could be sure. To keep getting better and help my team win. But, of course, like all players I have international ambitions. But that's not where my focus is right now. Of course, it would be an honor. I mean, of course, I have the international ambitions but you know the managers and the coaches who are responsible for U.S. football and likewise for Swedish football, they are the ones who decide which players are good enough to help the team.”