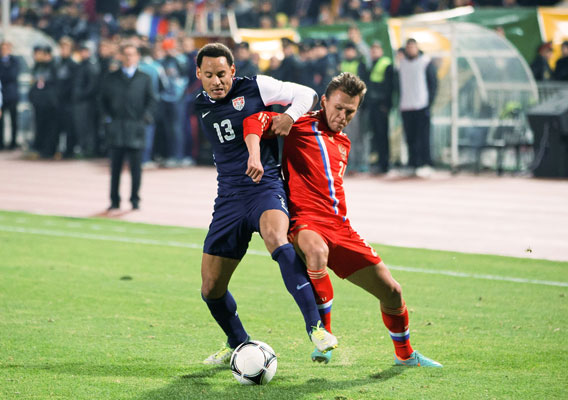 ASN's resident tactician does a deep dive into Wednesday's U.S.-Russia match, looking at the 4-3-3 alignment, Joshua Gatt's passes, and how the Americans exploited the Drop Zone.
BY Liviu Bird Posted
November 15, 2012
4:00 AM

Two opportunistic goals interspersed with two bad mental errors salvaged a 2-2 tie for the United States against Russia on Wednesday. It was a game that Russia probably deserved to win from the run of play, but once again, a Fabio Capello team couldn’t find a winning goal against the U.S. After the team settled in, the U.S. looked to be playing the classic Jürgen Klinsmann 4-3-3 that he has instilled since taking over as coach. It was difficult to ascertain at first because wingers Herculez Gomez and Josh Gatt were withdrawn to the point of looking like classic outside midfielders. That was likely due to their defensive workload early in the game, which resulted in Jozy Altidore having no support as the target man. Russia, on the other hand, saw some clever interchanges among the top four players of its 4-2-3-1. Striker Aleksandr Kerzhakov and attacking midfielders Dmitriy Kombarov, Aleksandr Kokorin, and Fedor Smolov played in a close diamond and penetrated at will in the first half hour. One of two defensive midfielders pressed to join the attack, and all but Kerzhakov dropped back to defend. Mental Lapses Lead to Goals
Two set pieces led to the two Russian goals. One was from a Russian foot and the other was from a misplayed pass by an American, but they had one thing in common: both were mental errors. On the first goal, Danny Williams played the ball into Jozy Altidore’s heel, and the deflection put Smolov in on goal, which he finished easily. On the second goal, the U.S. failed to step in front to deny a quick free kick, and Clarence Goodson wasn’t goal-side of his mark to start, leading him to take down Artem Dzyuba in the six-yard box for a penalty kick. Russia strikes quickly in the attack, often lulling opposing defenses to sleep before inflicting a deadly blow. Wednesday was no different. Emergence of Josh Gatt
One of the names on everybody’s minds for the last couple days was that of wide attacking player Josh Gatt, who received his first call-up and first cap on Wednesday. He earned himself at least one more look with his energetic play on both sides of the ball. In the early going, Gatt was one of few American players to mount serious attacks toward goal. However, he often missed out on opportunities to make a final pass into the penalty area. The U.S. had nine crosses in the game from open play and none of them were Gatt’s. He got into isolated positions on the wing where he could have served the ball into the box, but he often decided to cut the ball back instead of serving it in or taking players on.

For the Americans to be successful in a 4-3-3, their wingers will have to stay high and wide, take players on and serve the ball into the box. It didn’t happen often enough against Russia. They left Altidore alone against four or five Russian defensive players, and Michael Bradley and Jermaine Jones had nobody in advanced positions to give the ball. Winning the Second Ball
Both U.S. goals came from knockdowns on top of the Russian penalty area that American central midfielders were first to find. The plays started with long balls to get Russia’s defense to retreat, only to find that its defensive midfielders weren’t there to clean up the resulting headed clearance (or lay-off from Juan Agudelo).

Only American players were in the key spaces after the first ball. Coaches often talk about the importance of the second and third balls, and this is what they mean. Often the player who wins the initial aerial challenge isn’t the deciding factor in the outcome of the play. Central midfielders are tasked with roaming in the soft space between the opponent’s lines of players and finding the ball after the original play. Being able to constantly find those balls is the mark of a midfielder with a high soccer IQ. On Wednesday in Krasnodar, Bradley showed his ability in that situation, finding the ball on top of the penalty area a couple of times. He also showed a keener understanding of space on the field than most American players. He is adept at finding pockets of space to receive the ball, whether it is in the build-up out of the back or in advanced positions nearer the opponent’s goal. This is true of both knockdowns and receiving the ball at his feet. It’s one aspect of his game that has greatly improved since moving to the Italian Serie A. Bradley is starting to look like the next Landon Donovan, and the timing couldn’t be better, as Donovan’s position on the team is in doubt. When Donovan eventually leaves for good, somebody will have to pull the strings in the midfield for the U.S., and Bradley seems to be the most likely candidate for that role.

Liviu Bird is an assistant editor at Prost Amerika and a contributor to the New York Times Goal Blog. Follow him on Twitter at @LiviuBird.