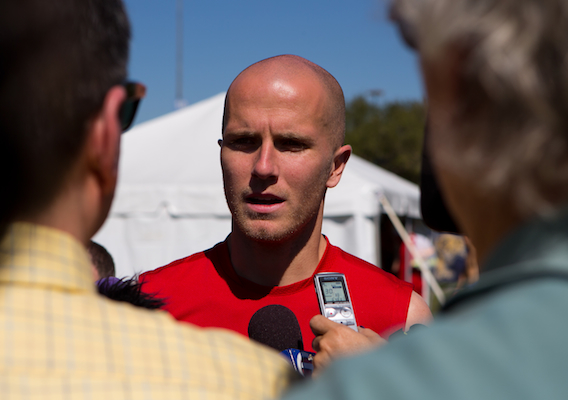 From Italy to Germany to Austria to Mexico, top-ranked Americans put their best feet forward in recent contests. Josh Deaver supplies the analysis, and the videos, in his weekly report.
BY Josh Deaver Posted
February 25, 2013
1:52 PM
Michael Bradley—ASN rank #1
In his first start under new Roma head coach Aurelio Andreazzoli, Bradley played 90 minutes Sunday and provided the game-winning assist in a 3-2 victory against Atalanta. In the 71st minute, Bradley lofted an inch-perfect pass into the box, converted by Vassilis Torosidis with an extremely difficult running header. Despite recent struggles with form, Roma, currently eighth in Serie A, sits only five points out of third and the final Italian Champions League spot.

Clint Dempsey—ASN rank #2
In Europa League action on Thursday, Dempsey came off the bench for Tottenham and played 23 minutes in a 1-1 draw with Lyon. Thanks to a late 90th minute goal by Moussa Dembele, Spurs will advance to the Europa League round of 16. Dempsey was active, and had a few scoring opportunities but his shots went wide. While Dempsey continues to receive minutes, the recent emergence of Lewis Holtby has likely pushed Dempsey back in the depth chart for the time being. American Brad Freidel received a start and played 90 minutes in goal for Spurs.

Fabian Johnson—ASN rank #6
Fabian Johnson and Hoffenheim took one more step toward relegation on Saturday, losing 2-1 to Augsburg, another squad fighting to remain in the German top flight. Johnson played 90 minutes for Hoffenheim, which now has only one win in its previous 12 league matches. Fellow Americans Danny Williams and Michael Parkhurst did not play. Terrence Boyd—ASN rank #16
After a nearly two-month break in the Austrian Bundesliga, the 22-year old continues to find the back of the net for Rapid Vienna. On Sunday Boyd scored his ninth league goal in 18 appearances this season in a 3-3 draw with Red Bull Salzburg. In the 48th minute Boyd got on the end of a cross and delivered a looping header that skipped past the goal keeper. The draw keeps Rapid third on the Austrian table, three points behind Salzburg and 15 behind league leaders Austria Vienna. Jermaine Jones—ASN rank #18
In midweek Champions League action, Jones received the start for Schalke and played an eventful 90 minutes as the German squad secured a vital away goal in its 1-1 draw with Galatasaray. With the first half winding down, Jones made a great counterattacking run into the box and scored on Jefferson Farfan’s well-placed cross. With the goal, Jones joins DaMarcus Beasley as the only American to ever score in the Champions League knockout round. Jones also picked up a foolish yellow card—when he asked the ref to give a Galatasaray player a yellow after he was fouled—and will miss the return leg. In Saturday Bundesliga action against Fortuna Dusseldorf, Jones picked up as assist in a 2-1 victory. Brek Shea—ASN rank #24
Shea debuted for Stoke City on Saturday, coming off the bench for an injured Matthew Etherington and playing 76 minutes in a 1-0 loss to Fulham. Shea initially looked rusty but he eventually found the pace of the match and was able to put in an active shift for the Potters. He drew a penalty in the second half but Fulham keeper Mark Schwarzer made a good save that secured the win for the CottagersIF Etherington misses extended time, Shea could take advantage of the opportunity and earn a spot on Jurgen Klinsmann’s roster for the upcoming World Cup qualifiers in March. Compatriot Geoff Cameron started and played 51 minutes for Stoke in the loss. Maurice Edu—ASN rank #29
The former Rangers midfielder started once again for Bursaspor in the Turkish Super Liga, playing 80 minutes and getting sent off in the club’s 2-1 loss to Gaziantepspor. Edu picked up his two cards in a three-minute span late in the second half, being called for a hand ball and a then a rough challenge just a few minutes later. Edgar Castillo—ASN rank #30
In Tijuana’s opening Copa Libertadores match on Tuesday, Castillo started and played 90 minutes while helping to set up the game-winning goal in a 1-0 victory over Colombian champs Millonarios. Fellow American Joe Corona also started, playing 70 minutes in the win. The Xolos take on Costa Rican side San Jose in Group 5 play on Tuesday. In Saturday Liga MX action, Tijuana rested Castillo in its 2-0 win over Atlante. Luis Gil—ASN rank #55
Currently on duty with the U.S. Men’s U-20 team, the Real Salt Lake midfielder started and played 90 minutes in both group matches in the opening round of the CONCACAF Championship. On Monday against Haiti, Gil converted a penalty kick for the game’s opening goal in a 2-1 victory. On Friday against Costa Rica, Gil’s corner kick found Jose Villarreal, who headed the ball home for the game’s only goal. On Tuesday the U-20s will take on Canada, with the winner advancing to this summer’s U-20 World Cup in Turkey. QUICK NOTES
For the second straight week, Timothy Chandler (#10) delivered a game-tying assist in Nuremberg’s 1-1 draw with Stuttgart on Saturday. Also on Saturday, Alejandro Bedoya (#46) scored the decisive goal for Helsingborg in a 2-1 preseason win against FC Copenhagen. After missing several weeks with injury, Jonathan Spector (#44) returned to the lineup for Birmingham City this week. Aron Johannsson (#50) is currently participating in light training with AZ Alkmaar following an offseason hernia surgery. Josh Deaver is a former academic turned soccer obsessive. Follow him @USFootballGuy for daily updates.