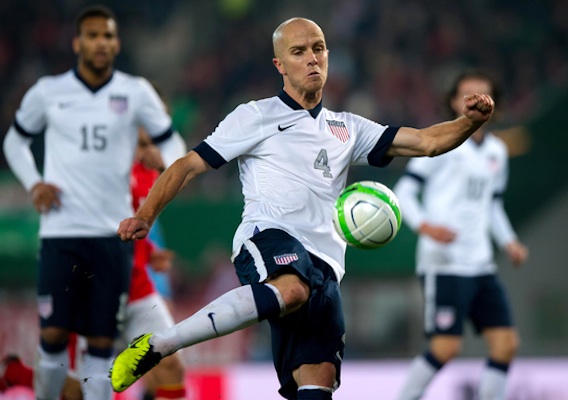 Michael Bradley Gets into the Books for Toronto FC

The best player in the American pool scores a beautiful goal, even as his new team struggles in preseason. Elsewhere, Jozy Altidore finds himself buried on the bench and say it ain't so, Holden.
BY Josh Deaver Posted
March 04, 2014
2:08 PM
Michael Bradley—ASN rank #1
It’s only preseason, but Michael Bradley is already producing some magic for Toronto FC. Lining up against Fluminense U23 on Saturday—as part of the Walt Disney World Pro Soccer Classic—Bradley curled in a beautiful free kick effort from just outside the box during the club’s 4-2 loss to the Brazilian reserves. Despite the highlight-reel goal (around 1:25 on the video), It hasn’t been a pretty preseason for the Reds. Ryan Nielsen’s side, still missing newly acquired striker Jemaine Defoe, failed to record a win in the four-match preseason tournament as the club still looks to be finding its chemistry among their flotilla of new signings. Originally called for the midweek friendly with Ukraine, U.S. Soccer announced on Saturday that Bradley would be skipping the trans-Atlantic flight with what was described as a minor injury. Toronto opens its regular season March 15 against the Seattle Sounders. Jozy Altidore—ASN rank #4
Knocking in the game-winner to catapult an unlikely Sunderland to the League Cup trophy would’ve been a nice redemption narrative for the forward. Unfortunately, the reality is far bleaker. Altidore was not included in the Black Cats roster for Sunday’s match, which saw Manchester City overcome an early Sunderland goal to take the Capital One Cup trophy with a 3-1 win. It’s really bad to worse for Altidore, who looks to be steadily losing minutes under Gus Poyet’s leadership. Is form really fallacy? Wednesday’s match with Ukraine could provide some answers. Clint Dempsey—ASN rank #5
Clint Dempsey’s European Adventure has come to an end. After being out of the lineup for three consecutive weeks, the Texas native lined up one final time for Fulham on Saturday, playing 90 minutes in an anti-climactic 3-1 loss to league leaders Chelsea. In what could be the last European game of his career, Dempsey opened the contest determined to get on the score sheet. After almost finding the target with an early near-post header, Dempsey—and Fulham as a whole, really—shrunk from the challenge of Jose Mourinho’s boys in blue. Though his loan stint will no doubt be deemed a failure, Dempsey will leave England with 72 professional goals to his name in a career that spanned seven Premier League seasons. Dempsey is currently with the national team preparing for Wednesday’s match with Ukraine. Seattle will kick off its MLS season on Saturday against Sporting KC. Aron Johannsson—ASN rank #8
Despite not finding the score sheet over the weekend—a rarity these days—Aron Johannsson was his usual kinetic self for Alkmaar on Sunday, playing 90 minutes and picking up two assists in a 4-0 win over RKC Waalwijk (around 1:15 and 2:00 of the video). Could his scintillating form earn him a place in the starting XI against Ukraine on Wednesday? How does it not? Jermaine Jones—ASN rank #10
Three weeks after arriving, Jermaine Jones made his debut for Turkish superpower Besiktas on Saturday, playing 58 minutes in a scoreless draw with Antalyaspor. Following national team camp, Jones should be back with the club for Sunday’s tilt with Eskisehirspor. Three points and a loss from Galatasaray will see BJK move into second place in the Turkish SuperLig, as well as grab hold of Turkey’s second Champions League slot. Mix Diskerud—ASN rank #16
Hoping to lock up his spot on the U.S. World Cup team, Diskerud was originally called up for the Ukraine friendly, only to be recalled prior to departing due to “injury." At least that’s what U.S. Soccer and Rosenborg are saying. Diskerud took to Twitter with the following message:

Instead of a trip to picturesque Cyprus with the national team and a chance to lock down a seat on the plane to Brazil, it appears Diskerud and Rosenborg will take on Norwegian third division club Levanger in a club friendly on Thursday. Can’t win ‘em all, I guess. DaMarcus Beasley—ASN rank #18
It was quite the weekend for DaMarcus Beasley. On Saturday, he welcomed baby daughter Lia into the world (congratulations!) and on Sunday he scored the game-winning goal in a 1-0 win over Queretaro. Beasley entered the match in the 37th minute for struggling Puebla, which found itself on the business end of a vicious 8-0 beat down by UANL Tigres in midweek Cup action. Making a burning half-line run, Beasley got on the end of a floated cross from the right, bouncing his header off the ground and past the keeper for the goal just after halftime. His first goal since last April, it was Beasley’s 12th Liga MX goal since arriving at Puebla in 2011. Compatriot Michael Orozco went 90 minutes in the win. Terrence Boyd—ASN rank #24
Despite a middling run of form by Rapid Vienna, Terrence Boyd continues to make his presence felt. Taking on league-destroyers Red Bull Salzburg (23 points ahead with a +63 GD) on Saturday, Boyd put in a full 90 minutes while scoring his ninth league goal of the year in a 6-3 loss. Down 2-0 in first half stoppage time, Boyd took advantage of a deflected shot, out-jumping a Red Bull defender and freezing the keeper with a low headed effort on the goal. His second in three matches since returning from the winter break, Boyd is already on pace to surpass his output from last season, needing only four goals to match his goal total during his debut season for the Green and Whites. Brek Shea—ASN rank #43
So, let’s say you’re a mercurial-yet-underperforming talent who has failed to catch on during his brief European career. This probably isn’t a very good look for you. In the aftermath of a 5-0 drubbing at the hands of Huddersfield Town on Saturday, Brek Shea is reported to have given the ol’ double finger salute to a section of Barnsley supporters following a confrontation between a fan and teammate Stephen Dawson. The incident has seemingly made Shea "persona non grata" among the Barnsley faithful who have taken to the internet to excoriate the young winger. Currently with the national team, the club issued the following statement: "In relation to an alleged incident concerning Brek Shea: the matter is currently under investigation and a further statement will be made upon Brek’s return from international duty." Jonathan Spector—ASN rank #51
Initially held off the final U.S. roster, thanks to a lack of availability from Michael Bradley, Tim Ream, and Mix Diskerud, the Birmingham City defender will be joining teammate Will Packwood for the match against Ukraine on Wednesday. With a legion of absences along the backline, the camp may be a vital one for Spector who, back from a six-month injury layoff, has seen himself climb Klinsmann’s depth chart through a process of elimination. On Saturday, Spector put in a solid shift at right back for Birmingham during a 1-0 loss to Ipswich Town. Stuart Holden—ASN rank #54
First there was this:


Ahhhh butterflies, not had those in a while! A lot of hardwork has gone into this and ready for next step! Thx for all the support


Then there was this:


Yup, this about sums it up. Making his umpteenth comeback for Bolton Wanderers during a reserve match on Monday, Stuart Holden made his exit inside of half an hour with what looked to be yet another knee injury. Fortunately, he was able to jog off the field under his own power. Holden will return to the U.S. for a scan and assessment by the original surgeon. Ugh. ASN Contributing Editor Josh Deaver is a former academic turned soccer obsessive. Follow him on Twitter already.