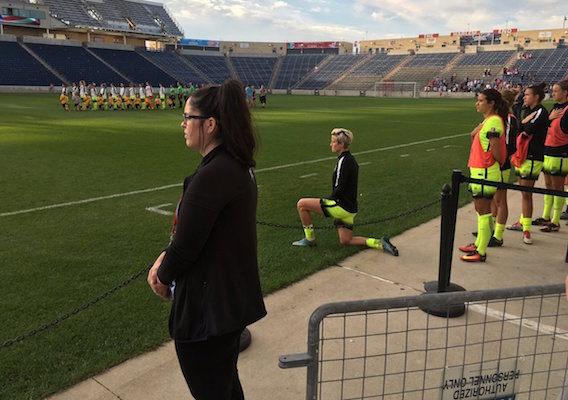 The silent protest occurred on Sunday night as the Star Spangled Banner was played ahead of a National Women’s Soccer League match between the Chicago Red Stars and Rapinoe’s team, the Seattle Reign.

Speaking after the match, Rapinoe explained why she decided to kneel during the anthem.

“It was very intentional,” said Rapinoe. “It was a little nod to Kaepernick and everything that he’s standing for right now. I think it’s actually pretty disgusting the way he was treated and the way that a lot of the media has covered it and made it about something that it absolutely isn’t. We need to have a more thoughtful, two-sided conversation about racial issues in this country.

ASN MATRIX: Did Rapinoe Do the Right Thing?

“Being a gay American, I know what it means to look at the flag and not have it protect all of your liberties. It was something small that I could do and something that I plan to keep doing in the future and hopefully spark some meaningful conversation around it. It’s important to have white people stand in support of people of color on this. We don’t need to be the leading voice, of course, but standing in support of them is something that’s really powerful.”

San Francisco 49er quarterback Colin Kaepernick started the protest last month, electing to sit down as the anthem was played ahead of a series of pre-season games. He later told NFL.com, “I am not going to stand up to show pride in a flag for a country that oppresses black people and people of color. To me, this is bigger than football and it would be selfish on my part to look the other way. There are bodies in the street and people getting paid leave and getting away with murder.”

Since then, other NFL players, including 49er teammate Eric Reid and the Seattle Seahawks’ Jeremy Lane, have joined the protest.

Rapinoe has also spoken out on the Black Lives Matter movement before. Last month, after the WBNA announced fines for players sporting Black Lives Matter t-shirts, Rapinoe told Excelle Sports, “I get sort of in theory where [the WNBA] is coming from, but it’s just so insensitive and so fucking stupid that they would fine players for a Black Lives Matter shirt.”