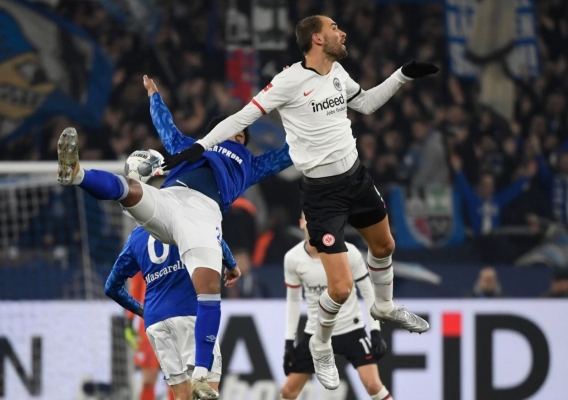 We thought last weekend was the worst weekend for Americans abroad in years. That might have been true. But as ASN's Brian Sciaretta writes, this past weekend was even worse.
BY Brian Sciaretta Posted
December 16, 2019
7:00 AM
IF THE PREVIOUS weekend was a brutal few days for Americans abroad, somehow, the recent weekend offered absolutely no improvement. In fact, it might have been even worse. There were very few positive performances, most American players lost their games – some in ugly fashion, many didn’t even play, and injuries continued to loom large.

Without a doubt, 2019 is ending a very poor front for Americans in Europe. Fortunately, 2020 should see the return of many injured players and the winter break friendlies have historically been a time when American players have transitioned from the youth levels to the first team. There are several young players like Gio Reyna and Uly Llanez who could be in contention for a similar progression but only time will tell.

For now, unfortunately, we can only look at the past weekend. And it was brutal.


Weston Mckennie earned the start for Schalke in central defense and was forced out of the game with a separated shoulder. Schalke would end up defeating Eintracht Frankfurt 1-0 but McKennie’s injury will keep him out for quite some time – according to his manager David Wagner.


????? #Wagner on @WMckennie: "Weston has dislocated his shoulder and is in hospital right now. We don't yet know if he'll need an operation. He will definitely be out for a while."#SchalkeUS???????? | #S04SGE pic.twitter.com/D4YwgZoOpS

Fortunately for McKennie, he will have the upcoming Bundesliga winter break to rest and he does not have any international duties until March.


For the second straight week, England was essentially a wipeout for American players. The most notable player, Christian Pulisic, struggled for Chelsea in a 1-0 loss at home to AFC Bournemouth. Chelsea advanced to the knockout stages of the Champions League last week but its Premier League results have been abysmal over its last five games (one win, four losses).

Pulisic had a few decent moments in the game but overall generated very little offensively. He is getting his share of the blame, but so are other players and so is Frank Lampard.

Elsewhere in the Premier League, DeAndre Yedlin did not get off the bench for Newcastle in a 1-0 loss to Burnley and Owen Otasowie did not make the bench for Wolves.

In the Championship, Tim Ream and Fulham lost their third in a row and the club is on the verge of falling out of the promotional playoff positions.

Antonee Robinson went the distance for Wigan Athletic in a 1-1 draw with Huddersfield. With the result, Wigan remained in the relegation zone of the Championship.

Duane Holmes went 88 minutes for Derby in a 1-0 loss at home to Millwall. Scoring goals remains a huge problem for 16th place Derby which has scored three goals in its last seven games.

Among the veteran core of Americans in England’s second tier, Geoff Cameron went 67 minutes for Queens Park Rangers in a 5-3 loss to Barnsley and Eric Lichaj went the distance for Hull City in a 2-2 draw with Charleton.

Elsewhere Matt Miazga was unable to go for Reading after picking up a hamstring injury in the final practice before its 0-0 draw with Stoke City (and Cameron Carter-Vickers was out sick for Stoke).

So among England’s top two flights, no American player won and Matt Miazga went out injured.


Things weren’t much better for American players across the middle of Europe either.

In Belgium, Brendan Hines-Ike did not get off the bench for Kortrijk in an ugly 1-2 loss at home to Royal Excel Mouscron. The same could be said for Ethan Horvath for club Brugge in a 3-0 win over Mechelen. Kenny Saief is nowhere to be found at Anderlecht over the whole season.

The one American who played in the league over the weekend was Chris Durkin who went the distance for St. Truiden in a 5-1 loss on the road to Zlute-Waregem.

In Austria, Erik Palmer-Brown went the distance for Austrian Vienna in a 1-1 draw at home to Wolfsberger. Meanwhile, Jesse Marsch’s Salzburg played to its third draw in four weeks in a 2-2 stalemate on the road against Hartberg.

In the Eredivisie, Sergino Dest did not play for Ajax in 1-0 loss to AZ Alkmaar. It was the second straight league loss for Ajax which allowed AZ to pull even with Ajax on points for the league lead.

Also in the Eredivisie, Haji Wright started for VVV-Venlo at home against 15th place PEC Zwolle. Wright was pulled at halftime after an ineffective 45 minutes and he is still yet to score or assist this season.

In Dutch second tier, Richard Ledezma started for Jong PSV which lost 0-1 at home to last place Dordrecht. Mael Corboz went the distance for Go Ahead Eagles in a 2-1 road win over Helmond Sport which allowed him to be one of the rare Americans to win this weekend.

In France’s second tier, Niko Gioacchini went the final 35 minutes for SM Caen in a 2-1 loss to Rodez. The loss left Caen only three points clear of the relegation zone.

In Turkey's Superlig, U.S national team winger Tyler Boyd did not get off the bench for Besiktas in a 0-2 loss at home to Yeni Malatyaspor.


Germany continued to be a mess.

Zack Steffen and Fortuna Dusseldorf dropped a 3-0 loss at home to RB Leipzig while Timothy Chandler earned a very rare start for Eintracht Frankfurt in the 1-0 loss to Schalke.

In the 2.Bundesliga, Julian Green remained out injured for Greuther Furth (which still won 5-1 on the road against Karlsruher). Sebastian Soto was an unused sub for Hannover in a 2-1 loss to Bochum. The same could be said for Bobby Wood who didn’t play for Hamburg in a 1-1 draw with Sandhausen. Finally Jann George played the final 10 minutes for Jahn Regensburg in a 1-0 loss to Erzgebirge Aue.


Did anything go right for Americans abroad this weekend? Not much but there are two things worth mentioning.

John Brooks played a full 90 minutes for Wolfsburg in a big 2-1 win over Borussia Monchengladbach. Wolfsburg found a winner in second half stoppage time and it reversed a skid where it had just one win from its last seven Bundesliga games. Wolfsburg has the best defense in the Bundesliga and Brooks is a big part of that. If it could score goals at a reasonable pace, it would be in the Bundesliga’s Champions League positions.