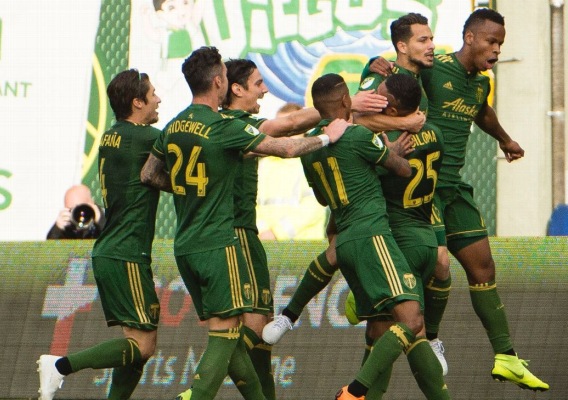 Martino and Berhalter lead impressive results, Eboboisse on the rise

Both New York area teams are on the ropes after some solid coaching from the opponents. In the West, Sporting KC is in good shape while Seattle and Portland are neck and neck.
BY Brian Sciaretta Posted
November 05, 2018
4:05 AM
THE FIRST LEG of the Conference Semifinals is underway and some teams stood out and others have found themselves in serious trouble. Every series is close, however, and that will set us up for a fascinating second leg.


The two big winners on the day were Tata Martino and Gregg Berhalter. In a foreshadowing of the likely next managers of Mexico and the United States, both had their teams ready to play in tough situations.

Yankee Stadium is a terrible venue for soccer and it’s a horrible showcase for the league. Still, the silly dimensions suit NYCFC well as the team is used to the narrow confines. That is no small reason why NYCFC is very tough to beat at home.

The fact that Atlanta was able to head into New York and walk away with a win while limiting the hosts to no shots on goal is remarkable. Heading into this game, there were questions about Martino’s preparation in must win games. Atlanta has struggled in important games. This was a huge response in this part from Martino.

NYCFC likely has to head to Atlanta and post a multigoal win. Anything is possible in this league, but I certainly don’t see it.

Two weeks ago, the Columbus Crew lost to Orlando in a game where it could have clinched a playoff spot. It looked horrible for Berhalter, who seems the overwhelming favorite to be the next USMNT head coach. But since then, it’s been quite the turnaround. The win against Minnesota was the first step, the second step was beating DC at Audi Field – where the Crew played aggressive and attacking soccer for long stretches.

But beating the Red Bulls 1-0 in Columbus was even more impressive. Columbus was playing on just two days of rest following a 120 minute win. The Red Bulls play high-intensity soccer which one would expect would wear down Columbus. That did not happen. Columbus had a game plan and capitalized on its one big opportunity.

Federico Higuain has simply been brilliant and it did not take much time for him to tilt the balance. The Red Bulls, meanwhile, had no such magic.

While this was on the road, it was massively deflating for the Red Bulls who were well-rested and riding a wave of momentum heading into the playoffs.


Sporting Kansas City should be happy with the 1-1 scoreline from last night. Utah at altitude is not an easy place to play and Real Salt Lake was buzzing from its defeat over LAFC from last week.

While not perfect, Sporting KC should have done enough to advance and to make matters worse for Real Salt Lake, Albert Rusnak will be suspended for the second leg following a second yellow card.

This MLS playoffs has been dominated by South Americans – from Diego Valeri to Federico Higuain. For Sporting Kansas City, it was Diego Rubio who scored for SKC only 38 second after coming into the game off the bench.

Real Salt Lake has been extraordinarily lucky the past month – from getting Houston to defeat the LA Galaxy on the final day of the season to clinch a postseason berth to getting unbelievable plays against LAFC. If it can defeat SKC next weekend, it would be another remarkable chapter.


It was a good result for Portland to knock off Seattle 2-1 at home in leg one. This series is far from over. Seattle got an away goal in the game and will now be returning home.

The big test for this series will be whether or not Chad Marshall and Cristian Roldan return for Seattle as both players picked up injuries in the first leg. If so, Seattle has a good chance at making a comeback.

Diego Valeri continues to dominate this league as perhaps the best midfielder in MLS. That’s not surprising. What is surprising is Jeremey Ebobisse’s continued impressive form. The young American has now been key to helping Portland defeat Dallas and no Seattle in the post season. He is not a 2015-esq Fanendo Adi but he is growing into his game and helping his team achieve results. There haven’t been many young American forwards to make inroads in MLS in recent years so Ebobisse’s story is refreshing.