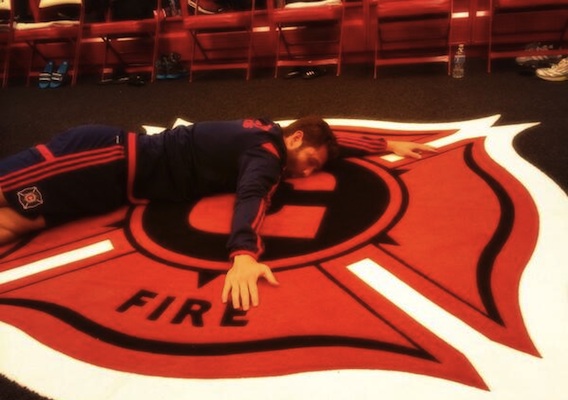 Mercer? Dayton? Clemson? And what in the world is Mike Magee doing on the ground like that? March Madness is highly contagious, as this installment of Tweets of the Week proves.
BY Justin Churchill Posted
March 25, 2014
10:35 AM

How can you not? He is the United States' leading goal scorer in the English Premier League this season.

Yessirrrrr my boy @GeoffCameron with the clean finish! I see you son!

The CONCACAF Champions League remains elusive for Major League Soccer and its players.

Not the result we wanted. Very proud of us for rallying together in the 2nd & never giving up. Thank you to the fans that came out:you rock!

Everything changed for the U.S. national team during the SnoClasico.

If stepped on you must 1) kiss it immediately 2) pay $20 3) hold kiss til it's on twitter. Unlucky @supersega13 #cf97 pic.twitter.com/zOSJjqbNfO

On to the quarterfinals in the Europa League...

There needs to be a full-length video of this—like the "Tiny Dancer" scene in Almost Famous.

This is pretty much the general consensus. Mercer? Mercer!

You really screwed the pooch there Duke! ???? #NCAAMarchMadness2014

Disclaimer: I have no idea who I'm picking and have watched no college bball this year. Lets go Clemson! Haha good luck to all!!

Jozy sums it up for a grateful country.

Steve Cherundolo is as good as they come. Terrific player and even better person. Congrats on a fantastic career!!

Did Justin get the rankings right? Did we miss a great tweet this week? Tell us in the comments section below.