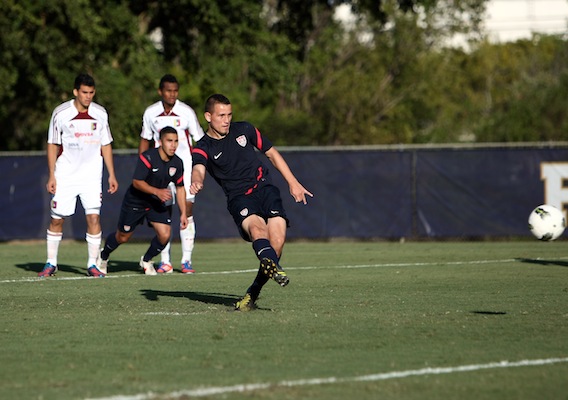 Just because certain leagues are hibernating doesn't mean there isn't plenty of ASN 100 action to report on, analyze, and obsess over. Here is the latest from American Soccer Now's Josh Deaver.
BY Josh Deaver Posted
December 24, 2012
8:10 AM
Michael Bradley—ASN rank #1
In the final week of Serie A action before the holiday break, Bradley and AS Roma picked up three points with a 4-2 victory over a resurgent AC Milan on Saturday. Despite an excellent run of form and four straight victories for the Rossoneri, Roma thoroughly dominated the proceedings. The visitors jumped out to a 4-0 lead early in the second half, quieting the San Siro, and only conceded late in the match while playing with 10 men. The win, in which Michael Bradley delivered another solid 90 minute shift, puts Roma into sixth place on the table and only four points off the top two. Geoff Cameron—ASN rank #7
Stoke City continued its eight-match unbeaten run, taking another point in a 0-0 draw against Tottenham on Saturday. While they may not be the flashiest team in the English Premier League, Cameron and the Stoke City defense have an EPL-best nine clean sheets while conceding only 13 goals in 18 games—a mark bettered by only four other European clubs this season. Cameron shined again at left back on Saturday, frustrating a Spurs attack that repeatedly failed to break down the burly back four of the Potters. Following the draw, the former Dynamo man is now ranked in the top five for interceptions and tackles halfway through his first EPL campaign. Jozy Altidore—ASN rank #8
Despite breaking a six-game winless run last Saturday against Zwolle, AZ registered yet another disappointing performance on Friday, falling 3-0 to FC Twente. Perhaps playing three matches in seven days contributed to the languid effort, but AZ continues to drop points and currently find themselves just clear of the bottom three. Despite the poor run of form for Alkmaar, it was still a good week for the American, who tallied his 15th goal of the campaign in midweek cup action against Dordrecht. See the video here. Sacha Kljestan—ASN rank #13
The mustachioed midfielder and Anderlecht continued their winning ways on Sunday, defeating Genk 4-2 in Pro League action. Winners of nine straight and unbeaten since October, the Purple and White are currently sitting eight points clear at the top of the table along with a dominant +19 goal differential. The most telling stat for the Belgian giantS: When Kljestan is in the starting XI, Anderlect have taken 72% of available points; without him just 42%. Following the match Kljestan tweeted, “Mustache stays until our winning streak ends. Could be handlebars by January!” Brad Guzan—ASN rank #19
While the scoreline might not reflect it, it was the effort of the American keeper alone that kept Sunday’s embarrassing 8-0 defeat against Chelsea from turning into a historical calamity. The Villains were torn to shreds all night by an impressive Chelsea midfield, who poured it on late by scoring five goals in the second half. Guzan made several point-blank reaction saves and stopped a penalty for an Aston Villa side that has failed to deliver much offensive support this season; evident in their league-worst goal differential. Fellow American Eric Lichaj also started and played 56 minutes in the loss.
Oguchi Onyewu—ASN rank #41
On Tuesday, Onyewu picked up another start for Malaga, scoring a late equalizer in Copa del Ray action against second division side Eibar. After conceding late in the second half, a horrendous goalkeeping mistake allowed Onyewu to get on the end of a cross and head it toward goal, scoring his second of the season in his seventh appearance for the club. Despite the positive on-field performances, including a historic 3-2 victory over Real Madrid on Saturday, Malaga learned this week that they would be barred from all European competitions next year due to outstanding issues involving unpaid wages. Luis Gil—ASN rank #55
The Real Salt Lake midfielder made the most of his recent U-20 National Team call up, capping off a two-week training camp by scoring against Venezuela during a closed scrimmage on Friday. The Americans rolled to a 4-0 victory in a game which also saw Mario Rodriguez, Dan Metzger, and oft-used LA Galaxy substitute Jose Villarreal find the score sheet. Gil has become a mainstay of a particularly strong looking U-20 squad that is preparing for upcoming World Cup qualifying. The full strength U-20 squad, which features ASN-ranked John Anthony Brooks, Will Packwood, and Benji Joya, hope to avenge some recent disappointing youth team performances when their campaign begins in less than two months. Will Packwood—ASN rank #94
The 19-year old defender on Saturday received his first start and appearance for Birmingham City since early October, going 90 minutes in a 2-2 draw against Burnley. With only one win in eight matches, Birmingham City is struggling mightily. Although they are safely clear of the drop zone, they are still firmly ensconced in the bottom third of the Championship table. Fellow American Jonathan Spector was not in the lineup for City, as he continues to recover from an ankle injury. Josh Deaver is a former academic turned soccer obsessive. Follow him on Twitter, @USFootballGuy, for daily updates.