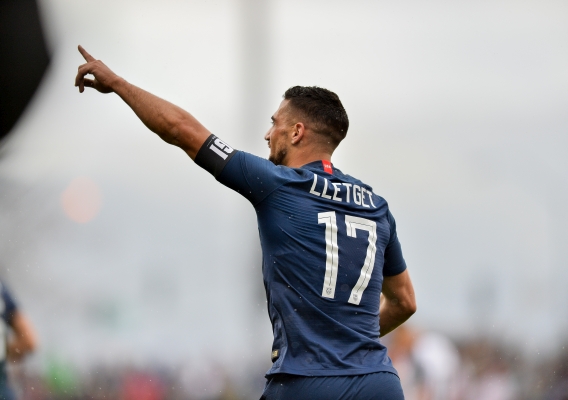 Lletget, Lewis, and Lima impress as the USMNT rolls past Costa Rica

THE UNITED STATES national team completed January camp with a convincing and comfortable 2-0 win over Costa Rica. The result was never in doubt because while the U.S. team couldn’t find a dangerous final ball in the first half, it always played like the better team.

The competition will be much better in the months and years ahead, but these were good first steps to build up some confidence and enthusiasm for the program. Beyond that, there also seemed to be the workings of a game plan and the players were embracing it

January camp is always an opportunity for domestic and sometimes overlooked players to prove they belong in the team. In the past, it has served as an important launchpad for several key players. Based on these two games, several players will likely continue to get call-ups.

Here is how the players and the coach did today.

Zack Steffen: pretty easy assignment for Steffen who wasn’t really tested as the U.S. controlled possession. He did well on the crosses into the box and distribution. Rating: 6.0

Daniel Lovitz: After a decent performance against Panama, Lovitz wasn’t particularly effective against Costa Rica. He was rarely dangerous moving forward but did not make any major defensive gaffs. Rating: 5.0

Walker Zimmerman: The towering central defender was in similar form with his partner Aaron Long. Both were fine defensively and grew into the game in the second half in terms of playing effectively out of the back. Rating: 6.0

Aaron Long: Like Zimmerman, Long improved as the game went along and helped keep Costa Rica off the board as the U.S. team controlled the game. Rating: 6.0

Nick Lima: Lima backed up his MOTM performance with another strong outing. Defensively he was a disruptive force. Offensively he was effective in combining with Arriola – who moved to right wing in the second half. Rating: 7.0

Wil Trapp: The central midfielder wasn’t great in the first half as he wasn’t the disruptive force that Berhalter needs from his No. 6. Passing was typically solid but in the second half, he was great with his passing going 23/23. His pass to Jonathan Lewis was first-rate on the buildup to the opening goal. Rating: 6.5

Cristian Roldan: After an uneven first half, Roldan was a lot more in-synch with the attack in the second half – especially after Lleget entered the game. He hit the post twice and his second one off the iron would have been a wonderful career highlight. While solid, Roldan looks to be one of the players who could really help the team once he is in midseason form. Given that this was only his second game in three months, it was a good outing. Rating: 7.0

Djordje Mihailovic: The young Chicago playmaker came back to earth a little bit after his strong debut against Panama. Mihailovic struggled to combine in the attacking third with Zardes and overall his final ball was lacking in the first 45 minutes. He looked a lot sharper at the start of the second half as the game tilted in favor of the Americans. Overall, it looks likely that he’ll head to the U.S. U-23 team this year – where he should do fine. Rating: 5.5

Gyasi Zardes: The Crew forward didn’t combine well with his attacking midfielders and having that understanding with his teammates is how he is his effective with Columbus. His first touch let him down a few times in dangerous positions. He had some nice passes in transition but wasn’t as dangerous as he needs to be for the U.S. team to fire on all cylinders. Rating: 5.0

Paul Arriola: It was a very good game from Arriola who had to do a lot in this game. As is typical, he played solid defense from the wing position. In the first half, he was the only American player who showed the ability to beat defenders with a dribble. Then in the second half, he switched to his more natural right side and was a nightmare for Costa Rica. When Lletget and Lewis came into the game, he was able to exploit more holes in the defense and was rewarded with a goal. Rating: 7.5

Sebastian Lletget: The LA Galaxy midfielder was the MOTM with a fantastic performance off the bench. The game was beginning to tilt in favor of the U.S. team when he came on but Lletget simply overwhelmed Costa Rica. His passing cut through the Costa Rica defense with ease and the game was completely opened up as a result. He finished with a goal and an assist – and most importantly a strong statement to the new coach for future call-ups. Rating: 8.0 and Man of the Match

Jonathan Lewis: In his first two U.S. caps, Lewis has been a difference maker off the bench when he was able to use his skill on the ball to beat defenders and create chances. He assisted on the opening goal and finished January camp with two assists. Rating: 7.5

Christian Ramirez: Ramirez seemed like an upgrade from Zardes at forward with his passing and ability and better understanding with his teammates. His flick-on header set up Lletget for his assist to Arriola on the second goal. Rating: 6.5

Gregg Berhalter: The New Jersey native had a nice game plan in this game. With most of his players rusty from the offseason, it was tough to find players who could reliably hit a dangerous final ball. His starting lineup was very limited with only one of his front five (Paul Arriola) being dangerous on the dribble in 1v1 situations. But his substitutes fixed this weakness and the U.S. team was dominant in the second half. But overall, the team bought into his game plan – which bodes well when many of the first team players join the roster. Rating: 7.0