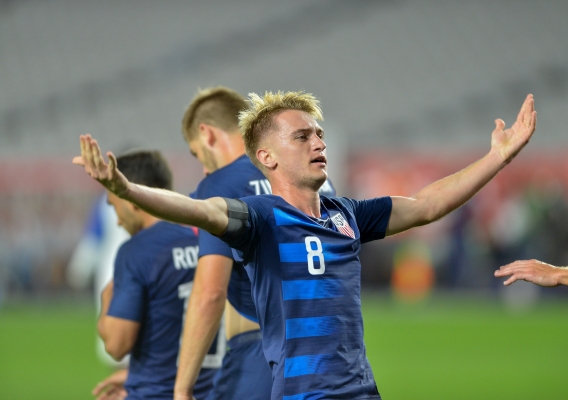 Lima, Mihailovic, and Bradley stand out in 3-0 win over Panama

The USMNT defeated Pamama in the first game of the Gregg Berhalter-era. With all of the players starting off with a clean slate, Brian Sciaretta issues player ratings for the team's first test under its new coach.
BY Brian Sciaretta Posted
January 27, 2019
12:50 PM
THE UNITED STATES opened the Gregg Berhalter era with a comfortable 3-0 win over an inexperienced Panama team. It’s always misleading to read too much into January camp friendlies but few players hurt their chances and it should give some momentum heading into Saturday’s friendly against Costa Rica.

January Camp friendlies are typically of poor quality given most of the players are in preseason and the opponents are also limited due to it not taking place on FIFA international dates. But in the past, several key players have emerged and tonight was a confidence boost, despite the opponent.

Here is how the players performed.


Zack Steffen: After a quiet first half, Steffen had a big save in the 56th minute for his best moment of the game. But the new Manchester City signing looked dependable and in form. Rating: 6.5

Daniel Lovitz: The left back from Pennsylvania was a little shaky at the start but adjusted and had a good game. It is welcome news because he plays a position where the U.S. team is short on options. He set up Zardes in the first half with a wonderful ball into the box and made a really nice tackle in the box in the 84th minute. Overall, he walked away with a fine outing. Rating. 6.0

Aaron Long: Wearing the captain’s armband, Long was solid even if he wasn’t tested all that much. He certainly did not hurt his chances of having a potentially big role on the team moving forward. Rating: 6.0

Walker Zimmerman: The LAFC central defender did what he does best when he headed home a Nick Lima cross to give the U.S. team a 2-0 lead. He is a total beast in the air. Central defense is competitive at the moment and Zimmerman does offer very good aerial ability. Rating: 6.5

Michael Bradley: Not wearing the armband, eyes were off Bradley to some extent. But with all the debate over his role on the team moving forward, he played very well in this game. He wasn’t part of any goal but his passing was deadly accurate and he was looking forward to keep the ball in the attack. Rating: 7.5

Christian Roldan: The Seattle Sounders midfielder was active and while he did not score or assist, his movement was very disruptive for Panama and he created space for others. It was a good outing for Roldan. Rating: 7.0

Djordje Mihailovic: The Chicago Fire attacking midfielder had a strong January camp and was rewarded with start in his international debut. He grew into the game in the first half and was rewarded with a goal. He was fortunate on the deflection but the run was well taken. He is a raw but you can see the upside. Rating: 7.0

Corey Baird: The MLS Rookie of the Year had a nice start in his international career with an assist on Mihailovic’s goal. But he was overall dangerous in the first half and made a favorable impression. Yes, he had a few turnovers but he looked prepared for the opportunity. Rating: 6.0

Gyasi Zardes: It wasn’t a good outing for Zardes but Columbus Crew forward did some little things well. He nearly laid the ball off for two assists on shots that went just wide (first for Mihailovic and second for Lima). But overall he missed too many golden chances. The most glaring came on a perfect cross from Ebobisse in the opening minutes and then minutes later on a pass from Lovitz. Missed another big chance in the 66th minute when he moved into the box with a clean shot that was hit directly at the goalkeeper. Overall, he wasn’t dynamic breaking down Panama’s defense. Rating: 4.5

Jeremy Ebobisse: Normally a center forward, Ebobisse got the start out wing. He should have had an assist in the opening minutes when his cross was very well delivered but a wide-open Zardes sent over the bar. For playing out of position, he did relatively well. He wasn’t explosive with the ball but his passing was effective. Rating: 5.5


Sebastian Lletget: The Galaxy midfielder replaced Mihailovic in the 62d minute and was a spark off the bench and generally did a good job keeping Panama on its back foot. Rating: 5.5

Jonathan Lewis: the Olympic eligible Lewis replaced Jeremy Ebobisse in the 67th minute and was always looking to take defenders on. He was rewarded on a fine assist on the final goal to set up Ramirez for a tap in. The NYCFC man impressed and could play a role on the upcoming U-23 team. Rating: 6.5

Sean Johnson: The NYCFC goalkeeper came on in the 74th minute but wasn’t asked to do much of anything. Rating: No Rating

Paul Arriola: Replaced Corey Baird in the 75th and did make much of an impact on the game. Rating: No rating.

Christian Ramirez: The LAFC had a dream debut where he was able to get into a great position for a tap-in on Lewis’ assist. Rating: 6.0

Wil Trapp: The Columbus captain made a cameo at the end but did play a big role. Rating: No rating.