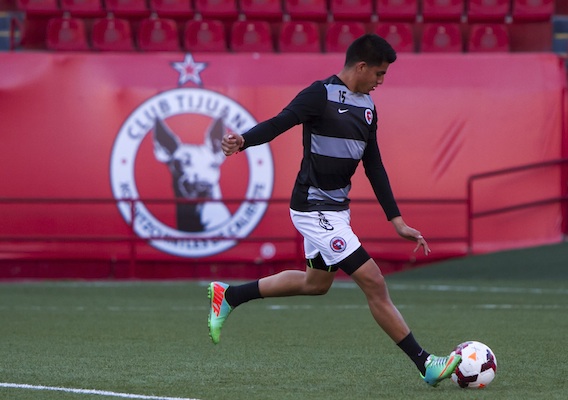 DaMarcus Beasley and Michael Orozco will try to turn things around at Puebla this weekend, while a resurgent Jose Torres looks to catch Jurgen Klinsmann’s eye.
BY Kim Tate Posted
March 21, 2014
1:48 PM

10:30 p.m. Friday (all times Eastern)
Fresh off a 1-0 loss to Tigres UNAL, Puebla and its two Americans, DaMarcus Beasley and Michael Orozco, will visit Tijuana in week 12 LigaMX action. Puebla hasn't been in the finest form of late, failing to score in its last three contests. In its 3-0 loss to Toluca on March 7, Beasley and Orozco were involved in giveaways and fouls that led to two of Toluca’s goals. When Puebla squares off against Tijuana, Beasley will have to be at his quick and agile best to contain Tijuana's attack; Orozco will have to be physical with Joe Corona and the likes of Cristian Pellerano, Juan Carlos Nunez, and Dario Benedetto. For Tijuana, expect Edgar Castillo and Corona to start at left back and in midfield, respectively. And with Herculez Gomez either starting or coming off the bench, we could see as many as five U.S. national team players on the field in this one.

9 p.m. Saturday
On Saturday night Pachuca will host Jaguares de Chiapas and San Diego native Gabriel Farfan, who is off to an impressive start with his team. The former Chivas USA midfielder has played in three games for Chiapas since joining the squad in January. Farfan started the last game in defense, playing 68 minutes in a 2-2 draw with Club America. Farfan went a full 90 minutes against Atlas on March 8, and came off the bench in the 57th minute in the club’s 3-0 loss to Leon the week prior. Assuming he sees more action in his week's game against Pachuca, Farfan will go up against the likes of Jurgen Damm and Ecuadorian internationals Walter Ayovi and Enner Valencia. Valencia is quite a handful and is on a great run of form, scoring seven goals in his last 11 games.

9:30 p.m. Saturday
Jose “Gringo” Torres has been in superb form for Tigres, scoring twice in its last three games. His 83rd-minute strike against Liga MX league leaders Cruz Azul cemented the 3-0 win for Tigres on March 8, and Torres also tallied against Atlante in Copa MX play as Tigres ran away with a 6-0 result. This weekend Tigres host Queretaro, a club that is in so much financial difficulty that the Mexican government has seized its training grounds. Tigres, which has risen from last place to 11th in just a few short weeks, will be heavily favored to win. Sixteenth-pace Queretaro have some good players—William da Silva and Esteban Paredes leap to mind—but Tigres has the stronger team from front to back, especially with Torres in impressive form. Kim Tate covers Liga MX for American Soccer Now. Follow her on Twitter.