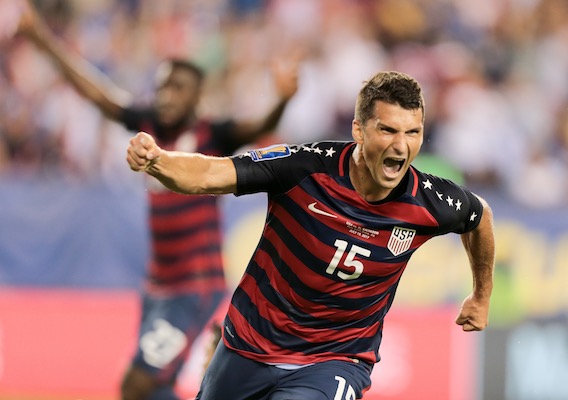 Lichaj gets a puppy, JoGo fallout, and more

There is some important news to run down today as Dom Dwyer leaves the USMNT, the unfortunate Gonzalez fallout continues, and Christian Pulisic names surfaces in the silly season. The best news, however, continues to fall at the feet of Eric Lichaj. Thanks Eric.
BY Brian Sciaretta Posted
January 11, 2018
1:20 PM
The 2018 calendar year is a brutal time in American soccer for many reasons and the news generally is polarizing. We hope the rest of the year is better. But among the rough news rundown, at least today we can bring you a picture of a puppy.

Lichaj gets a dog


It is an unpleasant time in American soccer these days and no one appears to be getting along. But you want some good news? Eric Lichaj’s wife, Kathryn, allowed him to get a dog even though the deal was that Eric had to score a hat trick to get permission. It turns out that two goals to down Arsenal in the FA Cup created such an awesome PR campaign that she conceded.


Wanted to show everyone the newest member of the Lichaj family.... Gunner. Thank you everyone for for pushing @KatPerko in the right direction! #erichasadog pic.twitter.com/SoTKiYiVMR

The U.S. national team January Camp opens today but even before the first practice there was a casualty as a hamstring injury forced Dom Dwyer to withdraw from the roster. As of now, no replacement is to be named.


The United States national team needed the Jonathan Gonzalez news like it needed a migraine headache. The U.S. team is not going to the World Cup, has no coach, no technical director, and the federation is going to elect a new president and the candidates have wildly contradicting visions.

No one is happy and the news this week that rising teenage star Jonathan Gonzalez is going to leave the U.S. program for Mexico makes everything much, much worse. I gave my thoughts on the matter a few days ago and I haven’t changed my opinion: Gonzalez was always going to switch once Mexico was involved.

It’s a fine debate – even if it has become heated and nasty. Rothenberg’s case would be stronger if he specifically mentioned what it would have taken for Gonzalez to stay. Did there need to be more phone calls? Is it all due to the fact that he wasn’t called up to the Portugal friendly? He can say U.S. Soccer didn’t do enough but he should say what would be enough.

Personally, I remain unconvinced because at such a low-point for the U.S. team, any reasonable person would know that Dave Sarachan is not going to set the vision for the team’s future. Gonzalez was called by Tab Ramos frequently and visited by US Soccer Chief Scout Thomas Rongen. I don’t believe Gonzalez is thin-skinned to be so offended that this wasn’t enough and he not rated at all by the federation. He knew the federation was still interested and he was in the picture.

But it’s a tricky time for everyone, not just Gonzalez. If he really wanted to play for the United States, why wouldn’t he have at least waited for the team to find its footing with a new president and a new coach to determine its new direction? It’s not a situation where he was neglected for a long period of time. Other players like Tyler Adams, Cameron Carter-Vickers, and Weston McKennie were also only just entering into the equation. Other top prospects like Zack Steffen, Antonee Robinson, and others are on deck.

Players that have a long history with a national team at the youth levels switch only after a long period of being ignored by the senior team. Kenny Saief is a good example as he left Israel after years of disinterest from its senior team. But Gonzalez didn’t want to wait even a few months. He was all too eager to jump. That suggests that it was probably unwinnable for U.S. Soccer.

Pulisic Watch in the Silly Season


What would January be without a good rumor of Christian Pulisic being wanted by top Premier League teams?

In the Independent, it is reported Manchester United and Liverpool could make a move this summer for the American teenager at Borussia Dortmund.

It’s all fun and games at this point. Pulisic will probably move eventually but there really shouldn’t be any sense of urgency either. He needs to move only when it’s likely he is an undisputed soccer.