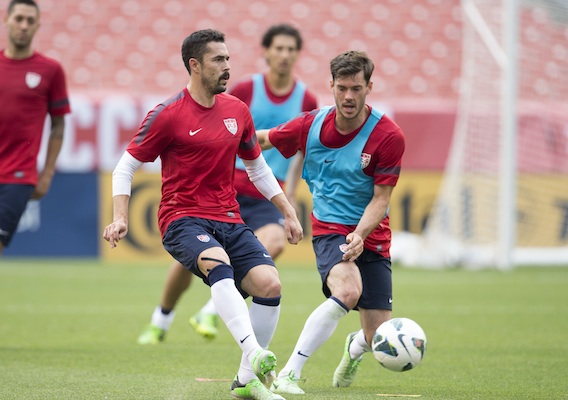 Who will start? Who will shine? How will the U.S. rebound from its poor showing against Belgium? Today's friendly against Germany should answer these and other questions ahead of three June qualifiers.
ASN Slideshow

BY Jon Arnold Posted
June 02, 2013
1:07 PM
After Belgium battered his team 4-2 in a Wednesday friendly, Jurgen Klinsmann said the Red Devils are the type of opposition he wants the United States national team to face. “We want to play teams like Belgium, like Germany, like Russia or Italy, because there’s so much you can read from those games, there’s so much you can see and obviously you want to win them,” he said in his news conference after the match. “When you lose them it’s not such a big pleasure, but I’d rather play Belgium 10 more times than El Salvador for the 100th time, because that’s where you learn.” How many more times will he want to play Germany after Sunday afternoon? The visitors to RFK are second in the FIFA rankings, which isn’t always an accurate indication of a team’s prowess. In this case, the only argument might be that Germany has surpassed Spain as the best team in the world. Its last loss was an August 2012 friendly against Argentina—an unbeaten streak of nine. Fortunately for U.S. fans who would rather not see Die Mannschaft a dozen times in hopes of seeing a more beatable team a bit more often, the full squad isn’t inside the Beltway because Bayern Munich just completed its treble yesterday. Unfortunately for that same group, Jogi Low still brings a line-up so strong that calling it formidable is an undersell. Lukas Podolski and Lars Bender both scored twice in a 4-2 drilling of Ecuador in Florida, and Klinsmann would be over the moon to have a defender like Schalke’s Benedikt Howedes at his disposal. Instead, Klinsmann is starting Brad Evans at right back. Evans, a versatile player who usually plays midfield in his club matches with the Seattle Sounders, would have his hands full playing that position ahead of natural right back Michael Parkhurst and Geoff Cameron. The Stoke City man hasn’t looked at all comfortable at right back with the Stars and Stripes, and Cameron been pushed out of the presumed center back pairing of the future by Matt Besler. Yet, it’s possible Cameron could start at center back as Klinsmann continues to modify his back four ahead of three crucial qualifying matches. But no matter what the back line looks like Sunday—and that’s still anyone’s guess —it will have plenty to do across 90 minutes. There is a bit of help arriving, with Michael Bradley arriving in time to influence the contest. Danny Williams is with him as well and could start alongside Bradley in an attempt to slow the German midfield's advances. As skilled as Bradley is, he won’t be able to fix all the issue the Americans had in their loss to Belgium, nor will he be able to counteract the positive things Germany did in its friendly against Ecuador. Like those matches though, this friendly will be like all others, significant not for the result but for the lessons learned. Klinsmann believes playing some of the world’s best will prepare the squad for the matches that really matter. If he’s right about that, then his decisions will be vindicated. If not, he has far larger problems than the world’s No. 2 team in town. Do you have high hopes for the match? What are your expectations? Tell us below. Jon Arnold is an ASN contributing writer.