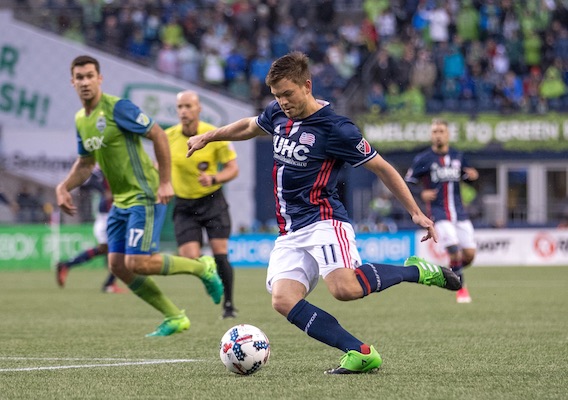 Kelyn Rowe Hoping for a Chance at 2017 Gold Cup

The New England Revolution midfielder/fullback was named to Bruce Arena's 40-man preliminary roster for the summer tournament, and he could bring some width and versatility to the U.S. player pool.
BY Brian Sciaretta Posted
June 21, 2017
7:45 AM

THERE IS A GROUP of American players, now in their mid-20s, whose only national team experience thus far has been brutal. The 2011 U-20 team failed to qualify for that year's World Cup and the 2012 U-23s did not qualify for the London Olympics, leaving a host of players with bitter memories of international play.

When you look at some of the players from this era, there are a few who have clawed their way past the disappointment and have found international success. Bobby Wood, who was on that 2011 U-20 team, is the best example, while Jorge Villafana and Sebastian Lletget also appear to be in Bruce Arena’s plans as the U.S. pushes to reach the 2018 World Cup. Others, like Greg Garza, Joe Corona, Juan Agudelo, and perhaps Perry Kitchen or Bill Hamid, have shown glimpses with the full national team.

Then there are those who have been absent from the international stage since 2012—players who are looking for a chance to set the record straight. Of this group, Kelyn Rowe, 25, is the most prominent example. Still in UCLA in 2011, he was on the U-20 team that came up short in qualifying. The following year the Washington native was cut from the U-23 team.

Since being drafted with the third overall pick in 2012, however, Rowe has been a steady presence for the New England Revolution. He has scored 34 goals and registered 37 assists in 192 appearances across all competitions while showing well at a variety of positions, including left back.

With the upcoming Gold Cup serving as an opportunity for Arena to expand his player pool, Rowe was named to the 40-player preliminary roster. Should he make the team, Rowe sees it not only as a way to impress the new U.S. national team coach, but also to rewrite his international legacy.

“Not qualifying for the U-20s and the U-23s, it is wrenching,” Rowe told American Soccer Now. “You feel it in your gut. It wasn't right. There is nothing good about that. There is a little bit of redemption if the Gold Cup team does well and I am a part of it. Whenever I speak to people from those teams, everyone still has a pit in their stomach about it. No one is happy about it and we're hoping to rewrite our wrongs”

Even though it has been five years since Rowe performed on the international stage, he is not bitter about his absence and was adamant that patience, and positive performances, would earn him a shot. The Rev's 2016 Player of the Year is quick to point out he has not made the Gold Cup team yet but he has been striving for it.

Based on the way the national team has been playing under Arena, however, Rowe might have an opening. The current player pool is still short on players who naturally play wide. Many current options—like Alejandro Bedoya and Darlington Nagbe—are primarily central midfielders.

There is also an opportunity at left back and Rowe’s recent conversion, along with Arena’s recent use of a five-man backline, might open the door. Rowe explained that his conversion to left back took a “little bit of time” but he worked hard on the defensive side and quickly learned how to use his skills to push forward from that area of the field.

On top of that, Rowe's current form also suggests that he might be of use to Arena. So far this year, he has shown glimpses of being a genuine difference-maker. His cross on Xavier Kouassi’s 86th-minute equalizer in New England’s 2-2 draw with New York City last month was splendid.

New England coach Jay Heaps has been in Rowe’s corner this year and has specifically singled out the former Bruin’s versatility and consistency—attributes that would attract the attention of the national team coach. With Rowe’s inclusion on the preliminary roster, it might have worked.

Throughout his career, Rowe has always shown glimpses of a high level talent but with the Revolution not rising to the level of an MLS contender in recent years he has seldom been in the national team discussion.

“I wouldn't say I've been overlooked,” Rowe said. “There have been so many good guys to go through the national team. Yedlin, Darlington Nagbe is getting his shot now, Zardes—those guys have played really well when they're there. I knew if I kept doing the right thing with my club team, I'd get a shot. I hope that it is now. The initial list and the initial call was a huge goal.

"It's been a major goal of mine to play for the national team. I did it at the youth ages but I haven't done it at the full team yet. But I am not in the 23 yet, I am not in the 18, and I am not in the Starting XI. They're goals that I do have and are reachable in my eyes but they're going to take a lot of work. It's fueling the fire for me.”

Arena is expected to announce his cut-down roster for the Gold Cup in the next few days, and if Rowe’s name appears on the list it will not only help shape his future, but it could also provide some closure to his past.