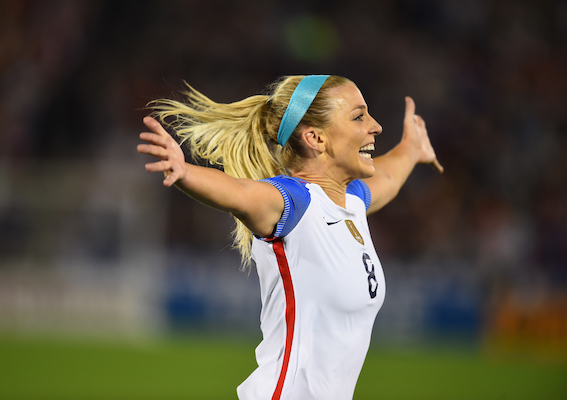 Playing in central midfield for the third consecutive game, Etz sparked the U.S. attack with two goals in the opening 25 minutes. Alex Morgan tallied late to give Jill Ellis' team an impressive victory.
BY John Halloran Posted
September 16, 2017
7:00 AM

The Americans got off to a quick start in the contest with Julie Ertz tallying twice inside the first 25 minutes and the U.S. taking a 2-0 lead into the break. In the second half, with 15 minutes to play, New Zealand managed to pull a goal back to make it a contest before Alex Morgan delivered the final dagger in the 79th minute to produce the end result.

Here are three thoughts on the win.

Ertz was a force on Friday evening, notching two goals in the first half hour of the contest and putting the Americans in a dominating position early on.

In the 16th minute, off a U.S. corner kick, the ball popped out to the top of the box. Kelley O’Hara—who earned her 100th cap on the night—served the ball back into the box where Lindsey Horan, lurking on the back post, headed back across the face of goal to Ertz, who calmly knocked it home for the opening goal.

Just eight minutes later Ertz struck again for the Americans. At the end of a wonderful 15-pass sequence, Mallory Pugh found Megan Rapinoe open on the far side of goal. Rapinoe’s header went off the post but bounced out near the top of the 18. Ertz, bombing forward from her deep-lying midfield position, lashed the loose ball home to double the U.S. lead.

The 15-pass, nine-player sequence that led to the second #USWNT goal.

Ertz scored on her 4th touch of the sequence. pic.twitter.com/3Qb0sj2iby

Ertz seems to have found a new role on the U.S. squad after making her bones as a center back and becoming a fan favorite there. Making the move to the midfield on the club level for the Chicago Red Stars this season, the Americans and Ellis are now reaping the rewards.

Following the U.S.’ loss this summer to Australia, Ellis once again reshuffled her formation after experimenting with a 3-5-2 and a more traditional 4-4-2 earlier in the year. Moving to a 4-3-3 with one defensive midfielder and two No. 8s, the switch has resulted in three straight wins for the Red, White, and Blue.

On Friday, Sam Mewis and Horan played the midfield roles with Ertz holding behind them. Both Mewis and Horan displayed their quality with Mewis showcasing her ability to break down defenses through her slick passing and Horan repeatedly working the ball out of traffic and keeping possession.

The new formation also seems to take advantage of the Americans’ natural strengths, having an abundance of center midfielders, as well as wingers who flourish in a more attacking role. In addition to Mewis and Horan, the U.S. has Rose Lavelle, Morgan Brian, Allie Long, and Carli Lloyd available centrally, and quality wide players in Rapinoe, Crystal Dunn, Tobin Heath, and Pugh.

Alex Morgan has been enjoying a run of form over the past few months. For her club, the Orlando Pride, she has scored nine goals in 11 games since returning midseason from her stint abroad with Olympique Lyon.

On Friday night Morgan looked strong again despite not showing up on the scoresheet until late in the contest. Morgan’s strength in the air, as well as her holdup play, are both underappreciated and she excelled against New Zealand in linking the American attack early on.

Morgan did finally get her reward late in the game with a superb finish to seal the result for the U.S. In the 79th minute, American debutant Sofia Huerta delivered an excellent crossfield pass to Morgan, who settled it, beat her defender with a quick move, and fired home.

Woah. The ball in, the touch, the separation, the finish. Huerta and Morgan. #USWNT pic.twitter.com/lAvrb8fxzr

Over the past year, Ellis has tinkered with a wide variety of options up top, but Morgan’s performance on Friday seemed to confirm that an in-form Morgan is still the best option in the forward position.