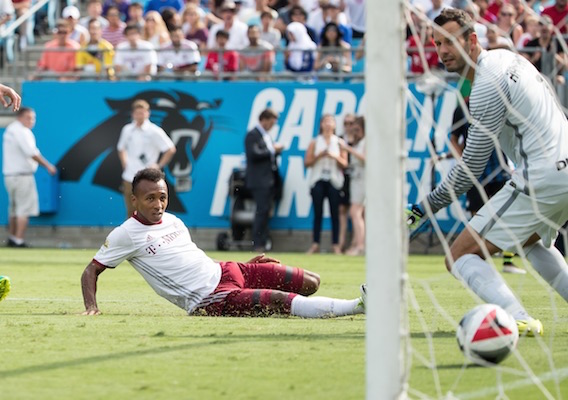 With the Liga MX Apertura underway and European preseasons in full swing, ASN's Brian Sciaretta has multiple updates—and some video highlights—from all over the world. Check it out.now.
BY Brian Sciaretta Posted
August 04, 2016
6:20 AM

SO FAR it has been a mostly positive preseason for younger Americans overseas, as a good number appear to be building strong cases for first-team minutes. Julian Green’s recent hat trick for Bayern Munich will help him meanwhile Christian Pulisic is coming along nicely as well.

Of course, there are some concerns. Matt Miazga (Chelsea) and Gedion Zalelem (Arsenal) will likely go out on loan and that is always a risk, and Desevio Payne and Emerson Hyndman are trying to recover from injuries in time to battle for starting jobs.

One American who is in his prime and surging right now is Omar Gonzalez. After walking into Pachuca’s starting lineup last season and winning the Liga MX Clausura title,the six-foot-five Texas native is off to a very strong start in the Apertura. How will that affect his national team status? Only Juegen Klinsmann knows for sure but Gonazalez is doing everything possible to remain in the equation.

By far the most surprising story among Americans abroad this summer has been the surge of Julian Green’s playing time with Bayern Munich. After having made four consecutive starts for Bayern, where his performances ranged from decent to solid, Green saved his best performances for Saturday’s game against Inter Milan.

The Florida native scored in the seventh, 30th, and 35th minutes in a convincing 4-1 win.

So what does this mean? Obviously it is very, very good news but just how much it matters remains to be seen. Scoring for Bayern, even in preseason, will get a player noticed. Green’s price tag just increased should Bayern want to sell. If Bayern wants to send him on loan, he should have no shortage of suitors.

Pulisic scores in a preseason tour

Christian Pulisic is the top American teenager in the game right now, and the 17-year-old has shown he can hold his own in the Bundesliga. The problem, however, is that Borussia Dortmund is deeper and more skilled than last year. Pulisic will  have to continue to raise his game in order to earn playing time.

Last week Pulisic did his part to get noticed when he scored a 90th-minute equalizer against Manchester City as part of the International Champions Cup tournament. Pulisic also converted his his penalty in the shootout.

The Liga MX Apertura season is underway and the only team with a perfect record right now is Pachuca—with nine points in three games. Pachuca’s early-season dominance comes from the fact it has only conceded one goal.

U.S. national team defender Omar Gonzalez and Oscar Murillo have combined to form what is probably the best central defense tandem in Mexico right now. After winning the Clausura title in the spring, Pachuca is continuing to impress.

Will this strong showing help Gonzalez work his way back into the national team picture?

In 2015 Jonathan Bornstein scored the biggest goal in Queretaro’s history when he scored late to send the unheralded club into the Liga MX final.

Through three games in the 2016 Apertura, Queretaro has amassed seven points and is now in second place. Bornstein, 31, has continued to be a mainstay and has played all 270 minutes.

While his national team career was erratic, Bornstein performed well in the 2010 World Cup and has had a solid professional career in both MLS and Liga MX. For such a maligned player, he’s done very well for himself.

Yedlin at left back

Tottenham coach Mauricio Pochettino has been trying DeAndre Yedlin at left back in recently friendlies. On Friday, Yedlin started and played 60 minutes for Tottenham in a 1-0 loss to Atletico Madrid.

Yedlin, 23, returned to the London club following a very successful loan at Sunderland. In his first game since joining the club this preseason, he came on as a halftime substitute against Juventus at left back. This led to the start against Atletico.

Playing time this year will be far more challenging for Yedlin but he if shows the ability to play either fullback position he could give Pochettino more options. If Tottenham opt to sell the Seattle native, the versatility will only increase his value. One potential destination is Sunderland as new head coach David Moyes revealed the club is still interested in bringing him back.

Carter-Vickers starts second in a row

Also with Tottenham, U.S. U-20 central defender Cameron Carter-Vickers has started each of the last two preseason games for Tottenham. It is an impressive feat for the 18-year-old English-American who now has a chance to make the first team on a regular basis.

Carter-Vickers is in a tricky situation. He is unlikely to start Premier League games for Tottenham but could see the bench often. As a teenager, he needs to play but will youth competition and a few first-team minutes off the bench be sufficient? Important decisions will have to be made quickly for this promising talent.

Some of the lower leagues in Europe got underway this past weekend and a pair of American head coaches got off to great starts.

In Ligue 2 on Friday, Bob Bradley and Le Havre started off their season with a 1-0 win on the road over newly promoted Orleans. Last season Bradley and the club fell just short of promotion. This year, however, expectations are higher and the team should be a contender to move up.

In the German 3.Liga, the situation is the same for Joe Enochs and Osnabruck which fell short of promotion to the 2.Bundesliga last year. This season, however, started strongly for Osnabruck on Sunday which defeated Preußen Münster 1-0 on the road.

Enochs has a pair of Americans on his team this season:. Former St. Louis University forward Robert Kristo was a second-half substitute in the 1-0 win on Sunday while fellow forward Marc Heider earned a start and a place on the 3.Liga team of the week for his performance.

VfB Stuttgart was relegated out of the Bundesliga last season but the 2.Bundesliga should open the door for some of the club’s younger players after the departure of higher-priced veterans.

One such player is American midfielder Joel Sonora. The former U.S. U-20 World Cup midfielder has started a number of recent friendlies, including a 3-1 win over Gruether Furth on Saturday.

After much speculation about a potential move to cross-town rivals Maccabi Tel Aviv, Tennessee native Aaron Schoenfeld has decided to return to Hapoel Tel Aviv but not without a huge raise to a reported salary of €300,000.

Schoenfeld, 26, took the Israeli league by storm last year after he could not even get a game for Columbus Crew SC. Now he’s making a salary that would be among the best non-DP salaries in Major League Soccer. Not bad.