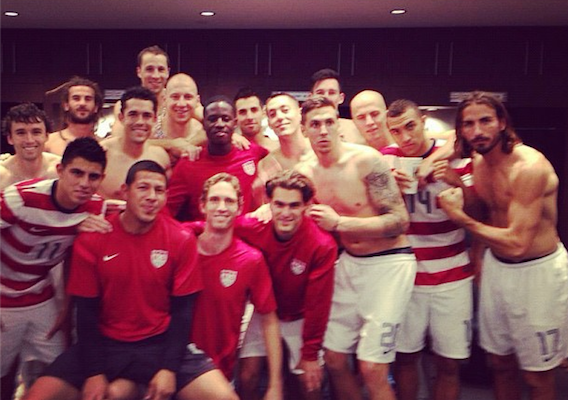 In this edition of USMNT Tweets of the Week, an American forward congratulates his teammates for getting to the Hexagonal and Clint Dempsey displays a bit of dry wit.
BY Jesse Yomtov Posted
October 20, 2012
8:09 AM
10. Alejando Bedoya—Having done this myself on several occasions, you really can’t turn it off once you start.

9. Stuart Holden—He’s got the good sense and self-control to watch MvF at 7 p.m. rather than 2 a.m. like most people.

Watching Man vs Food re-runs ... @adamrichman you are the man dude ha ha!

Field we played on last night for a WCQ. Hainstagr.am/p/QvJn_eHb2B/

6. Jozy Altidore—After being omitted from the squad, classy tweet from the young striker:

On to the hex! Congrats to the #USMNT on a job very well done. Great and fun game to watch. Keep it going! #USA #USA #USA

5. Eddie Johnson—EJ’s comeback has been a talking point lately, but he’s not done yet:

There is so much more soccer in my tank.

Was sitting in the London Museum for the past few hours mesmerized by the WWII video. Anyone have any questions about WWII, ask away.

2. Dax McCarty—In response to a Red Bulls contest for a signed Dax McCarty jersey, we’re reminded that even Twitter contests have fine print:

I really want that damn jersey! @newyorkredbulls, if I win, how do we proceed? That would be kinda awkward. I better get a fair chance tho!

1. Herculez Gomez—So many things to love about this picture. Alan Gordon flexing for some reason. Dempsey with his trademark smirk. Geoff Cameron absolutely bewildered:

On to the next round! @nickrimando Goonies (AG) always flex in group photos.instagr.am/p/Q4ucGdA-8M/