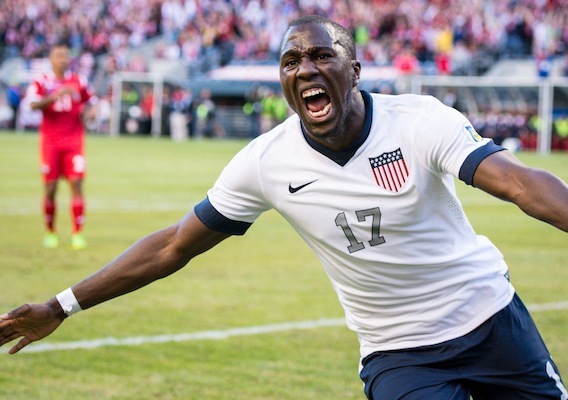 Jurgen Klinsmann had a few things to say about new U.S. national team prospect Aron Johannsson. And so did Jozy Altidore, who played alongside Johannsson at AZ Alkmaar last season.
BY John Godfrey Posted
July 31, 2013
10:46 PM
ARON JOHANNSSON IS RANKED No. 48 on the ASN 100 for a reason. He's good. So when Johannsson informed U.S. Soccer of his desire to apply for a change of association to represent the United States in international competition, it was big news—for U.S. soccer obsessives anyway. The United States federation "submitted the petition to FIFA this morning and look forward to the successful completion of the process," according to an official statement. “We are excited that Aron has chosen to pursue his international career with the United States," said U.S. national team coach Jurgen Klinsmann. "We have been in contact with him for the last several months. He is a great young talent with a bright future, and we look forward to introducing him to our team as soon as possible.” ASN asked Johannsson's former teammate at AZ Alkmaar, Jozy Altidore, a few questions about the striker. (We reached him via email in England.) Here's what he had to say. AMERICAN SOCCER NOW: What do you think of Johannsson's announcement that he wants to play for the U.S.?
JOZY ALTIDORE: I am thrilled Aron chose the United States. He is a good person and a quality player. He could make us a deeper, stronger team. ASN: What kind of game does Johannsson have?
ALTIDORE: Aron could do a lot of things that would help us. Sure, he can score goals, but he can also set up his teammates for opportunities. ASN: Did you see anything special from Johannsson in training or during matches?
ALTIDORE: Definitely. Right away. I saw that he's clever and good on the ball. He loves to drop in a little deep to get to the ball and look for the pass. At the same time, he's very good in the area and can score goals. The U.S. soccer federation added the following notes to this announcement: