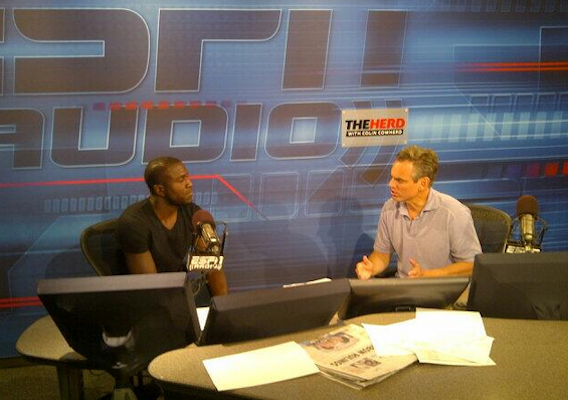 The United States national team forward hams it up with Colin Cowherd on ESPN Radio, while Terrence Boyd stages a dance-off with some new friends and Brad Evans gets patriotic.
BY Jesse Yomtov Posted
June 30, 2013
9:41 AM
10. Ike Opara: Gotta love draft analysis

8. A.J. DeLaGarza: Hard to believe that Justin Timberlake was once this guy

7. Omar Gonzalez: Imagine two of him on the back line

Hey thought i was doing it too! RT @lagalaxy Guess who's back!... http://t.co/EZz9E396p8 pic.twitter.com/VDHhbgeBW4

6. Teal Bunbury: Sort of defeats the point of the caffeine, eh?

5. Jozy Altidore: Can only imagine the trolling that Mr. Cowherd did in this interview

4. Brad Davis: With the new contract, Graham can afford to get some clothes that fit right

@gzusi what size shirt you wearing these days? Looks like a 4X you have on!

Was looking for a place in town to have some Sushi and turned this place down!! Lol #NotTheBestName pic.twitter.com/E7dLzeyEDM

Coolin with my new buddies https://t.co/hH1O6S6NDh