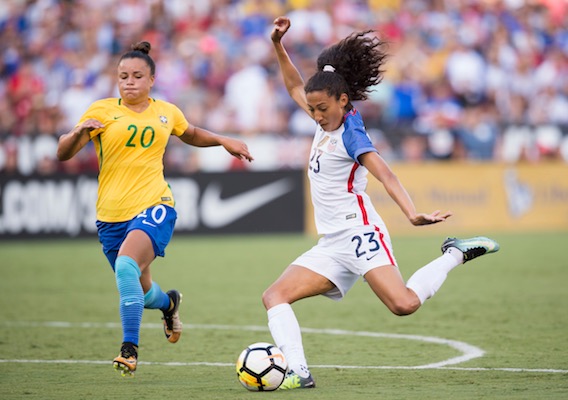 The U.S. women's national team coach has embraced experimentation and tough competiton as she seeks to get the team ready for 2019. Last night that approach resulted in a 4-3 comeback win over Brazil.
BY John D. Halloran Posted
July 31, 2017
8:05 AM

In March the team beat No. 2 Germany to kick off the SheBelieves Cup before falling 1-0 to England. Then, in the final match of the tournament, France played the U.S. off the field in a humiliating 3-0 defeat.

Things seemed to level out in June as the Americans picked up quality wins in Europe over the ninth-ranked Swedes and No. 11 Norway. However, the Tournament of Nations began last Thursday with another dip, as the U.S. lost to Australia for the first time in its history.

On Sunday against Brazil, the rollercoaster continued, with the Americans scoring three times in the final 10 minutes to finish off a dramatic comeback and pick up a 4-3 win.

At the heart of these up-and-down results are two main factors. First, the U.S.’ schedule is the most difficult it has ever been. Second, Jill Ellis has decided to use this period—the nadir of the three-year gap between the 2016 Olympics and the 2019 World Cup—to unleash a series of experiments with the team’s roster, lineup, tactics, and formation.

Even before the dramatic win over Brazil, Ellis passionately defended her plan to take the U.S. forward into the 2019 World Cup.

“I always know there’s a maelstrom around this team,” explained Ellis in the pre-game press conference. “That’s the reality of it. What remains, for me, is that you can’t be half-in with a vision. You’re either all-in, or you’re not. I mapped this out 15 months ago, in terms of what I wanted to do.”

The coach also stressed the need for putting challenging opponents on the schedule and playing her youngsters now, against quality opponents. Ellis pointed out that she’s already seen what her veteran players can do and that testing her newbies in five or 10-minute cameos wouldn’t get the job done.

On Sunday, Ellis the experiments continued. This time, the U.S. unveiled a new 4-1-2-3 formation and moved center back Becky Sauerbrunn into the midfield as the team’s No. 6—a position she hadn’t played at any level in years. Without the veteran defender anchoring the backline, the relatively inexperienced duo of Abby Dahlkemper and Casey Short took up positions in the center back slots.

After the match, Ellis explained that she made the moves for a number of reasons.

“We knew Marta would sit in that pocket a lot,” said Ellis. “I saw some growth in Abby and wanted to give her the ability to control her line, in terms of owning the line. I felt like we needed Short’s pace at times, centrally. And, I’ve seen Becky in [the No. 6], she’s got great feet and can problem solve.”

The U.S. went down early in the contest, when goalkeeper Alyssa Naeher botched a routine save to gift the Brazilians a goal in only the second minute. However, the Americans found their way back into the contest 15 minutes later when Sam Mewis drove a low, hard shot that deflected off a defender and into the goal.

In the second half, Brazil scored twice to take a 3-1 lead. However, the Americans would mount a furious comeback in the final 10 minutes with goals coming through Christen Press, Megan Rapinoe, and Julie Ertz.

Despite the fact that veteran players led the comeback, Ellis argued the win had value for the youngsters as well.

“Now all those young players, on our bench and in the game, have experienced something like that,” she said. “That’s a massive takeaway for us—that you’re never out of it. You can only learn that lesson by going through it.”

The coach also took time after the game to reiterate the need for a challenging schedule: “It doesn’t benefit us to play teams that we beat 5-0.” Additionally, she addressed the frustration some fans have felt over the team’s recent performances and lineups.

“I don’t need [the fans] to be patient,” said Ellis. “We expect the same of ourselves. This is how it goes. If you play the same 11 every time, people are like, ‘Why aren’t you trying new people?’ Everything right now is for 2019.”

“I think only coaches understand this,” she added. “You have to go through challenges, experiments, and looking at new players. The game is evolving so quickly. It’s impossible to go with a roster from one World Cup to another now. That day is behind us.”

Ellis noted that despite the ups and downs, the team has found good players as a result of her experiments and that team chemistry will improve as she narrows down the player pool. She also admitted the team’s experiments had caused some issues with chemistry, particularly on the two goals Brazil scored from set pieces.

“As we come out of this tournament, we’ll be starting to look at building the pieces and where we want to go,” said Ellis. “And then you start to look at consistency and chemistry. I feel like we have the makings of a really amazing team. But like tonight, you see sometimes on set pieces—if you don’t train together a lot and put different pieces in, there’s going to be confusion at times and we got punished for that.”

The U.S. takes on Japan in the final match of the Tournament of Nations on Thursday (10 p.m. ET, ESPN2).