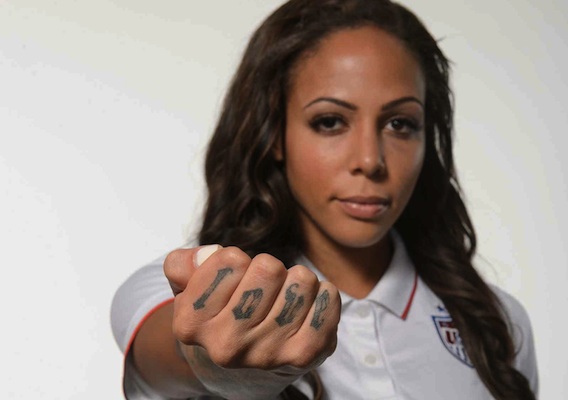 What formation will the U.S. be using?

In Tom Sermanni's last game in charge against China in April, and in Ellis' first game in charge as interim coach in May, the U.S. lined up in a 4-3-3—a dramatic departure from the 4-4-2 preferred during much of the Pia Sundhage era. With seven forwards being named to the roster, it seems a safe bet that the U.S. will be sticking with the three-forward set against France. France should also offer a stiff test for the Americans and its new formation as the French are currently ranked No. 4 in the world.

Who should start up top?

The U.S. is flush with talent at forward, including Abby Wambach, Alex Morgan, Sydney Leroux, and Christen Press. But throwing a monkey wrench into any potential forward rotation is Amy Rodriguez, who has returned in 2014 with a vengeance, scoring eight goals in 10 games so far this season for FC Kansas City in the NWSL. Rodriguez lost her starting position on the U.S. to Alex Morgan in 2011, but Morgan has been hurt since last fall with a stress reaction in her ankle and has only recently returned to full training with her club, the Portland Thorns. And although unlikely, Rodriguez could also sneak into a starting role ahead of Abby Wambach. While Wambach is the world's all-time international goal-scoring leader, she has looked a half step slower over the past year.

Also included in the forward pool this time around is Bayern Munich standout Sarah Hagen, who impressed many fans with her performance in the Algarve Cup. Heather O'Reilly, while listed as a midfielder on the roster, would also likely be in the forward pool—assuming the U.S. plays three forwards. Lindsey Horan, who has enjoyed some excellent recent form with Paris Saint Germain, was not called into the squad.

Where will O'Hara and Mewis play?

Two interesting notes from the roster were the listings of Kelley O'Hara as a forward and Kristie Mewis as a midfielder. While O'Hara has regularly played forward both in college and currently with her club, Sky Blue FC, she made her mark with the U.S. women's team as a left back—a position on the squad that is still largely up for grabs. Mewis is also listed at her natural position—midfield—but has also routinely been used at the international level as a left back, often when O'Hara was out of the squad due to injury. Where either might play against France should say a lot about how Ellis views their potential contribution to the team. Stephanie Cox, Crystal Dunn (who has also often played a midfield role in college and now as a professional), and Ali Krieger are the only three outside backs listed on the roster as defenders. Cox has provided some excellent service from the left flank as of late and, other than Mewis, is the only natural leftie of the bunch. But questions remain about both Cox' and Mewis' ability to defend at the international level.

Other than the aforementioned Horan, the only notable absences—among players called up over the past year—were Erika Tymrak, Amber Brooks, and Yael Averbuch. All three were left off Sermanni's last roster as well as the roster Ellis' named as the interim coach for May's friendly against Canada. Although Tymrak is a special talent and Brooks and Averbuch seem like natural substitutes for the "Shannon Boxx" role, it appears that Ellis doesn't see any of the three as potential contributors for the U.S. as World Cup qualifying approaches in October. Also: Regulars Megan Rapinoe and Rachel Van Hollebeke are injured and were not named to the squad.

For the first time in over a year, Shannon Boxx will be a part of the U.S. team. Now 36, many assumed that following knee surgery last spring and the birth of her daughter this spring, that Boxx's international career was now over. However, Ellis had been hinting recently that Boxx was still in the mix and Monday's roster confirmed this. U.S. Soccer has said that Boxx will not be playing in the games against France, and that she is being brought into camp for training and evaluation purposes only. In Boxx's absence, the U.S. has struggled to find a true holding midfielder—a job that has most recently been filled by youngster Morgan Brian.

Also back on the team

Tobin Heath, who has missed many of the U.S.'s recent games due to a combination of injuries and club commitments, will be back on the roster for the games against France. She'll be joined by Allie Long, who was called into the U.S.'s last camp for the game against Canada. Julie Johnston, who has been in and out of the squad over the past year and captained the U.S. U-20 team to a World Cup championship in 2012, was also named to the roster. Do you like this roster? Are you expecting big things from Ellis as World Cup preparations continue? Share your thoughts below. John D. Halloran is an American Soccer Now columnist. Follow him on Twitter.