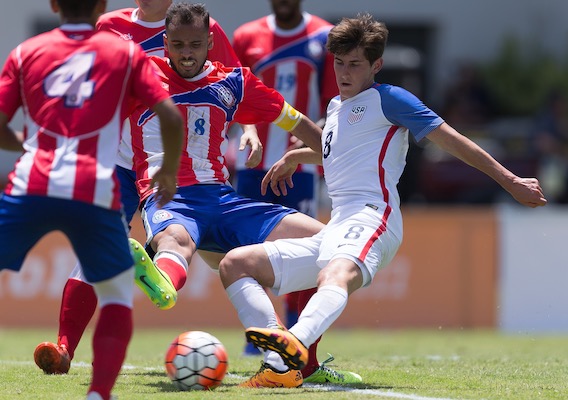 Is U.S. Entering a Golden Age of Central Midfielders?

The future is bright in the center of the pitch for the U.S. men's national team, as a quintet of young, talented, and ambitious players are well-positioned to make their mark on the international stage.
BY Brian Sciaretta Posted
June 23, 2017
10:00 AM

SINCE 2011 the central midfield position for the United States national team has been dominated by Jermaine Jones and Michael Bradley. But when glancing ahead to the next generation, it looks like this will be a strong point in American soccer. In fact, we might be entering  a “golden generation” of American players at this position.

It is not as if other players haven’t been given a shot in the traditional No. 6 or No. 8 positions in central midfield. Both Bob Bradley and Jurgen Klinsmann had high hopes for Stuart Holden but injuries crippled his promising career. Kyle Beckerman broke into the team later in his career and was useful as his tactical discipline served as a glue for the Bradley/Jones pairing.

There were also others that never really quite fit in. Jose Torres and Alfredo Morales received multiple call-ups during the early parts of Klinsmann’s tenure but never had much of an impact. Sacha Kljestan fell in and out of favor with Klinsmann and the early signs look like Arena has moved on from him.

Danny Williams had a great season for Reading and appears bound for the Premier League. While still only 28, it is easy to imagine him sneaking back into the picture (but his previous 22 caps featured more downs than ups). Geoff Cameron, meanwhile, has played in the midfield quite a bit for Stoke City recently but like Klinsmann, Arena apparently sees him best deployed as a central defender.

Arena is almost certainly going to stick with Bradley through the World Cup. If the captain can raise his game like he did earlier this month against Mexico at Estadio Azteca, the Yanks will be just fine.

Looking at the scene in 2017, there are a bunch of solid short-term options to partner with Bradley. Dax McCarty has been great since arriving in Chicago. Sebastian Lletget, while injured, looked up to the task with the national team during an important qualifier last year. Joe Corona fell out of favor with the national team but is back in the mix after a nice season with Club Tijuana.

Looking beyond the 2018 World Cup, the list of potential difference-makers is impressive. Some of them are ready for the national team now but could emerge as leaders inside of the next few years.

The FC Dallas product has enjoyed a great 2017 so far, transforming himself from a prospect in to a leader on one of the best teams in MLS. Acosta, 21, did not look out of place in the Starting XI at the Azteca and his performance there should only earn him more minutes down the road. His chemistry with Bradley also looks solid—a key for securing playing time in the near term. That sets him up well for the Gold Cup this summer which will be an important test for Acosta and the Acosta/Bradley pairing.

While players like Tyler Adams and Weston McKennie have huge upsides, Acosta is the most game-ready player on this list and it would not be surprising if he saw important minutes in Russia or emerge as a national team starter in the months ahead. Also, it should not surprise anyone if Acosta makes a move to Europe sooner rather than later, earning Dallas a nice transfer fee in the process.

Like Acosta, McKennie is a product of the youth teams and academy of FC Dallas—one of the best development academies in the country. McKennie, 18, might be the most naturally talented player on this list. He jumped ship to Europe last year with Schalke and impressed the club’s U-19 team, one of the best in Germany. Despite missing several months with an injury, McKennie made his Bundesliga debut at the end of the season and could be ready to see regular first-team minutes next year.

The third Texan to make this list, Hyndman made the most of a loan to Rangers in January where he emerged as a true difference-maker for the Scottish club. Soon after arriving in Glasgow, Hyndman earned a starting spot, scoring importing goals and assisting on others down the stretch.

Some American fans were disappointed Hyndman was not on the Gold Cup preliminary roster but it is for the best as he is entering a pivotal season.

Hyndman, 21, has recently returned to his parent club, AFC Bournemouth, and the Premier League club needs to make some decisions. The gap between the Scottish top flight and the Premier League is enormous. While the level of play in Scotland has sharply declined over the last decade, Hyndman showed he was ready for a bigger test. But finding his level right now is tough. If he can play regularly for Bournemouth, then he’s in excellent shape. If not, Bournemouth will need to quickly loan him out somewhere where he can play regularly.

Hyndman has a bright future, but his present remains unsettled.

In 2016 Roldan made a statement with the Seattle Sounders after earning a spot in the Starting XI. Last season Roldan made 44 appearances (36 starts) for Seattle in all competitions. He played a total of 3,562 minutes and won MLS Cup in the process. It was a year of growth for the Artesia, Calif., native.

This year Roldan appears headed for another season where he is set to eclipse 3,000 minutes plateau. While Seattle has struggled this season, Roldan has been among the Sounder’s better players. (The team's struggles are largely due to he backline and the forwards.) Bruce Arena named Roldan to the preliminary roster for the Gold Cup, which would mark his national team debut and cap-tie him internationally to the United States. As of now, he is also eligible to play for El Salvador and Guatemala.

Roldan’s ceiling is not as clear as the other players on this list. Whereas Acosta, McKennie, Hyndman, and Adams were all rated for youth national teams, Roldan has been overlooked. He was cut from the 2015 U-20 World Cup team and was drafted by Seattle with a modest 16th overall pick in 2015.

But he belongs on this roster because he has continued to raise his game as he has been given more responsibilities. He turned 22 earlier this month and has 92 first-team games under his belt while playing alongside noted professionals like Clint Demspey and Nicolas Lodeiro. Roldan is the oldest player on this list but he has accomplished a lot so far. If he can make the Gold Cup team, it will be an important opportunity for him.

Adams, 18, in the youngest player here but he has seen his career take off in 2017. He won the starting central midfield job for the New York Red Bulls and has earned high praise from the team’s coaching staff. Jesse Marsch has said that he wished Adams was included on the Gold Cup team this summer. Assistant coach Chris Armas said Adams is much better than he was at a similar stage in his career.

Adams, 18, also was the starting central midfielder for the 2017 U.S. U-20 team this summer, the team that won CONCACAF and advanced to the quarterfinal of the World Cup. He is eligible for the 2019 U-20 team, where he could emerge as captain.

Very athletic and fast, Adams is very good defensively and can quickly win tackles and close down passing lanes. Offensively, he can put himself in good positions and has an eye for making effective passes. Not surprisingly, he is the rawest player on this list. He still produces too many turnovers and needs to make quicker decisions. But he is fun to watch and the tools are all there for a big upside.

The Red Bulls/Metrostars organization has provided a launchpad for a huge number of national team players, and Adams looks to be next in line. European teams are certain to be interested given his age and performances in 2017 but Adams is in a very good position right now. He has a starting job and is playing for a coach who believes in him. At some point Adams should make a jump but there is clearly no hurry for him.

The best of the rest

There are other central midfielders that are worth considering. Erik Palmer-Brown was named the best player at the U-20 CONCACAF Championships this year playing as a defensive midfielder. He is one of the most highly regarded prospects in American soccer but his future is almost certainly as a central defender—even though his midfield potential is high.

Lynden Gooch has played in a variety of positions for Sunderland, and while central midfield is among them, his best position remains unclear. Gedion Zelalem was at one point in strong consideration for this list but his career appears to have stagnated after two mediocre loan spells. Also, his recent ACL tear will set him back. He remains a talented player but will need find somewhere to play soon after he returns to health.

Predicting the future of young players is always perilous. Some players will never live up to their potential while other players will emerge with limited fanfare. It's always a numbers game. The more quality prospects a country produces, the higher the chances it will produce stars. With that said, it looks very likely that the United States national team will have a bright future in central midfield.

Are there other names that should be added to this list? What do you think of Brian's take? Share your perspective in the Comments section below.