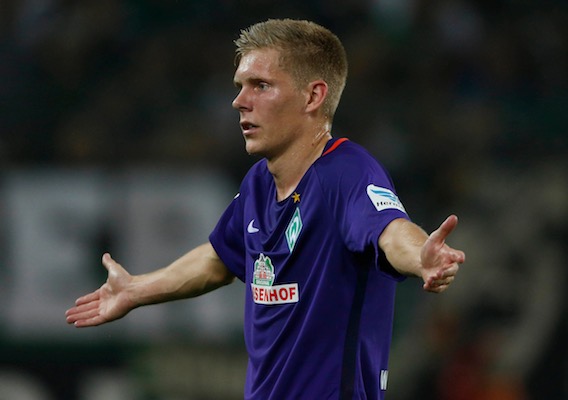 American and Werder Bremen fans are hoping that the latest injury to Aron Johannsson is not serious while Matt Miazga was fined, Jack McInerney is on trial for IFK Goteborg, and the latest on Taylor Booth
BY Brian Sciaretta Posted
February 07, 2018
11:00 AM
There was a flurry of news from abroad on Wednesday regarding some key players regarding Americans abroad. Here is the latest rundown.


Aron Johannsson, 27, appeared to be having a great week. After struggling for playing time most of the past two and a half years for Werder Bremen due to injuries (a total of 766 Bundesliga minutes), Johannsson has been showing glimpses of his former self.

On Saturday he helped create Werder’s winning goal against Schalke with a beautiful chip pass. The three points from that game moved Werder further away from the relegation zone. Then yesterday the Icelandic-American earned the start against Bayer Leverkusen and scored early in the game to give Werder Bremen a 2-0 lead.


Nice touch and scooped finish by Aron Johannsson for #WerderBremen vs #Bayer04 in the #DFBPokal quarterfinal. His first start and his first goal since September 2016! Good way to end his very long 17 month drought. #Werder #B04SVW #USMNT pic.twitter.com/bCr2JlAqHX

But things took a horrible turn late in the first half when Johannsson was forced out of the game limping and was removed to start the second half. Following the game, it was revealed it was an injury to his hip. Werder added later that the club does not believe it to be serious.

Most fans, however, are probably still concerned because a nerve injury in his hip kept him off the field for almost over a year.

American forwards have had a tough time staying healthy. Last year Clint Dempsey finally recovered from a heart condition. Bobby Wood’s knees have been a problem for quite some time and finally there is Johannsson’s hip. With failure of other young players like Rubio Rubin to step into that role, the player pool at forward is thin.


Booth closing in in Bayern move


Last month, the Washington Post reported that Taylor Booth, 16, was closing in on a move to Bayern Munich. ASN can confirm that the two sides are indeed very close now and we’ve heard that the Real Salt Lake youth product is in the final stages of acquiring an Italian passport through his mother’s heritage. When he acquires that, he would be able to move to Germany right away – which is what he intends to do.

While it is great to see Booth make the move to such a prestigious club, a pathway to the first team at Bayern is extremely hard. Still, if any American in his mid-teens has the ability to make it, Booth is it. He was one of the top performers at the recent youth summit playing as a central midfielder.


United States national team central defender Matt Miazga avoided suspension recently for the incident against Heerenveen where hurt an opponent with contact in the groin.

On Wednesday, it was announced by Vitesse that the club had fined the New Jersey native for “unprofessional behavior.”0

McInerney on trial with Goteborg

American forward Jack McInerney, 25, was once considered one of the top young American forwards coming up through MLS when he was with the Phiadlephia Union. In recent seasons, however, playing time was tough to come by and his last stint at the LA Galaxy was especially difficult.

The Georgia native is now trying his luck in Sweden and is on trial with IFK Goteborg. He arrived at the team’s camp preseason in Spain on Monday and will play in a friendly on Friday. On Saturday the club will make a decision whether or not to move forward with McInerney.