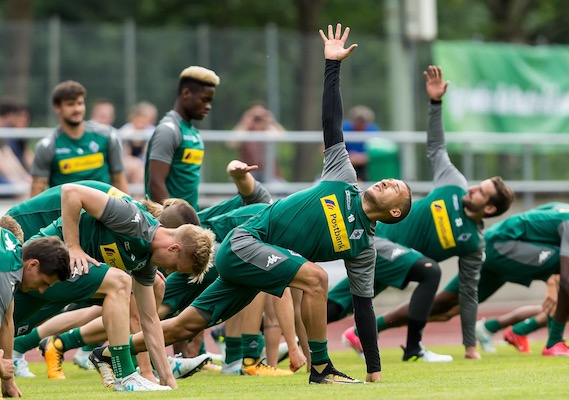 With two World Cup qualifiers coming in early September, Bruce Arena is confronting an injury-plagued defensive corps that could force him to get creative. Brian Sciaretta handicaps the conundrum.
BY Brian Sciaretta Posted
August 18, 2017
6:00 AM

AS THE SEPTEMBER WORLD CUP qualifiers approach, injury concerns for some and lack of playing time for others could limit Bruce Arena’s options.

The good news is that the team is better shape than it was back in March for the away qualifier against Panama. The current situation, however, for the U.S team is far from ideal with the backline hit the hardest. Here is a look at a few of the current injuries and what it all means.

DeAndre Yedlin
After a very successful outing with the U.S. national team in June, on August 3rd we learned that Deandre Yedlin suffered a pulled hamstring with Newcastle United. The timetable for return was listed at three weeks, which would mark his return at approximately August 24—eight days ahead of the Costa Rica qualifier.

That timeline is cutting it very close and hamstring injuries tend to be unpredictable. It is probably going to be a close call if he returns in time and can regain fitness.

John Brooks
On Wednesday, Wolfsburg sporting director Olaf Rebbe revealed that John Brooks tore a tendon in his thigh and will miss three months. This was horrible news for Wolfsburg as Brooks was an expensive offseason addition for the club as it attempts to rebuild after a disappointing 2016-17 campaign.

For the U.S. team this essentially rules him out for the remainder of 2017 and the next time he will likely get a shot with the Yanks will be in March 2018. Brooks, 24, is a likely starter and key player for the U.S. His absence is significant even if his appearances are at times too inconsistent for a player of his immense talent.

Omar Gonzalez
After helping the U.S. win the Gold Cup, Omar Gonzalez returned to Pachuca but was forced out of an August 9 Copa MX in the 24th minute with an undisclosed injury. He subsequently missed the following weekend’s Liga MX game for Pachuca as well.

Gonzalez, 28, is a back-up central defender if everyone is healthy–and he likely sits behind Geoff Cameron on the depth chart on the right side of central defense. But with so many players questionable, his injury could pose major problems for Arena.

Eric Lichaj
Apparently making a long-overdue return to the national team to play in the Gold Cup may have had tough consequences for Lichaj who has been an unused substitute in each of Nottingham Forest’s first three games of the Englosh Championship. His only minutes this month have come in a League Cup matchup. Despite being the team’s best player last season, Lichaj is struggling for minutes to start 2017-18, which is not ideal if he wants to continue to remain in the national team picture.

Matt Miazga
After a strong second half of the season for Vitesse, where he won the Dutch Cup, Miazga returned to the national team for the Gold Cup but rarely played. He elected to return to Vitesse for another loan in 2017-18 but he missed preseason again.

It's still too early to say he’s not a first-choice starter at the moment for Vitesse but he was an unused substitute on August 5 in the Dutch Super Cup and only came off the bench in the 82nd minute in Saturday’s 4-1 route over NAC Brede in the Eredivisie opener. He will likely re-emerge in the starting lineup eventually since the club pressed Chelsea hard to secure him for another loan, but for right now it doesn’t help in with the national team.

Jorge Villafana
After starting for the United States national team in its win over Jamaica in the Gold Cup final, Jorge Villafana returned to Santos Laguna only to ride the bench for two straight Liga MX games. He managed to play a full 90 in a Copa MX win on Tuesday but that is typically a lower-level experimental tournament in the early stages.

As a strong candidate to be the United States' starting left back, Villafana needs consistent minutes at left back. His lack of playing time to start the season probably won’t drastically hurt his chances in September because unlike Lichaj or Miazga, he played a lot at the Gold Cup. But it could quickly become a problem if it continues.

Fabian Johnson
While not a defender under Arena or at Borussia Monchengladbach, Johnson’s history as a fullback makes him an option there with so many players dealing with injuries and a lack of minutes.

Johnson, 29, is a lock to make the U.S. roster when helathy but his minutes for Monchengladbach seemed to drop this preseason. In the German Cup first round game last weekend against Rot-Weiss Essen, he only appeared as a stoppage-time substitute in a late comeback win.

Despite the inconsistent preseason, Johnson remains an important option for Arena.

Central Defense
The good news right now for the U.S. is that Cameron and Ream are both in good form. On Monday Ream made the EFL Team of the Week and has generally been trending positively since March. Ream and Cameron would seem to have a good chance of starting against the Ticos.

As the central defense back-ups, Gonzalez and Besler stand a decent chance to make the team if Gonzalez can return to health. If not, Miazga will likely take Gonzalez’s place. There is also a chance Arena could bring five central defenders if he wants to keep the option of going with a three-man central defense formation like he deployed against Mexico in June.

Further down the depth chart you have players who have been with the team in 2017 like Matt Hedges, Walker Zimmerman, and Steve Birnbaum.

Left Back
Despite Villafana’s lack of minutes since the Gold Cup, left back does not have that many issues right now. Villafana played enough at the Gold Cup to still be in decent shape for September. The ageless DaMarcus Beasley has found the fountain of youth in 2017 for Houston and Arena still probably sees him as an option there after his performance in the Azteca in June.

Meanwhile, Johnson can still make the roster as a midfielder while being a legitimate option at fullback.

Right Back
Arena has every reason to hope Yedlin will be recovered and in shape for the start of camp this month in New Jersey. In June, Arena played Yedlin for 270 minutes in an eight-day span which revealed the Newcastle fullback’s importance to the team.

After Yedlin, there are four options and none of them are ideal. Graham Zusi is trying to convert to the position and his performance gradually improved during the Gold Cup after a poor start. Still, playing at home against Costa Rica will be an enormous challenge—beyond anything Zusi has faced yet.

Lichaj is not playing for Nottingham Forest and his minutes at the Gold Cup were limited. In the times he saw the field, he had some good moments but he also made some dreadful mistakes.

Timothy Chandler has yet to play for the U.S. under Arena and there is always some risk given Chandler's tendency to underperform with the national team. His last appearance with the national team came against the same Costa Rican team last November—and it was a disaster. Still, he has been playing well for Eintracht Frankfurt in preseason after a mostly positive 2016-17 campaign.

Similarly, Johnson has not played in the backline under Arena despite mostly playing there under Jurgen Klinsmann. Johnson prefers midfield and wants to keep his roles similar between club and country. In an emergency he will fill in and might actually be the best option. But whether or not Arena plays him there is a separate issue.

Looking into my crystal ball, I think Arena will go with a backline against the Ticos that consists of Beasley at left back, Ream and Cameron in the middle, and Zusi at right back.

Some U.S. fans might not like the idea of Zusi at right back but Arena tends to prefer familiarity in important games and the fact that the Sporting Kansas City mainstay went the distance in the Gold Cup semifinal and final makes him tough to bet against for the backup job right now. Yedlin might make it back but it always seems to be risky to predict a quick return from a hamstring—especially for a player who relies on speed as much as Yedlin.

There is also a decent chance that if Zusi is the top option, Chandler makes the squad as his backup. Arena is probably going to want to explore Chandler as an option at some point and see how he responds in camp. Perhaps Arena will find a way get the most out of him.

Who would you like to see starting for the U.S. against Costa Rica? Share your thoughts below.