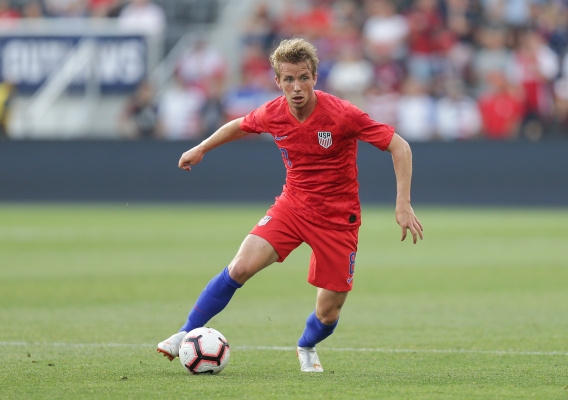 In the midst of a breakout season, Yueill aims big for Quakes & Olympic team

It wasn't easy for Jackson Yeuill early in his career as the San Jose struggled and lacked direction. But new manager Matias Almeyda has given him a lot of responsibility, and Yueill has been delivering in a breakout season. Now Yueill is aiming for a playoff spot - and a lead role on the U-23 Olympic team.
BY Brian Sciaretta Posted
July 01, 2019
12:00 PM
THE MOST SURPRISING story so far in the 2019 MLS season is the San Jose Earthquakes which has made a remarkable turnaround from a disastrous 2018 season and into a playoff-caliber team in 2019. After a poor start, San Jose has been on a terrific run since April and is quickly climbing the Western Conference standings.

The roster between the two seasons is not dramatically different. What is different, however, is the coaching staff led by Matias Almeyda and the improvement and development of key players, most notably midfielder Jackson Yueill

Yueill, 22, has broken through in impressive fashion in 2019 where he has emerged as one of the league’s best young American midfielders where he is helping the Earthquakes play attractive and winning soccer.

“I've been really happy with the new staff coming in. It's kind of given the Earthquakes new hope and new life,” Yueill said. “It kind of breathed in a new culture and I really dove into it. I think I've been very appreciative of how much trust me they've give me and what they've done for me. And you can kind of see it on the pitch that everyone's working for one another, everyone wants to play, the competition's very high during trainings and it is showing on the field. So I think it's just the beginning.”


The Quakes are must-watch IMO pic.twitter.com/EgUIJ3QI0L

The first two seasons of his career were not easy for Yueill as San Jose was the doormat of the league in 2018 with just 21 points. In 2017, it managed to make the playoffs but lost in the play-in round to Vancouver by a 5-0 score with Yueill coming into the game for the final four minutes. During those years, Yueill played under three different head coaches.

But under Almeyda, it wasn’t pretty at first. San Jose lost its first four games of the 2019 season by a combined score of 14-2. But following a terrible 5-0 loss to LAFC at home on March 30, things seemed to go off like a light switch for San Jose and it has pulled off 25 points in the 13 games since that span (seven wins, 4 draws, two losses) to move it into fifth place.

“I think most of it is mental,” Yueill explained. “I think last year we had good games. I think defensively we were weak in the final 15 minutes where we let teams come back and beat us. And this year he's kind of really honed in on everyone's mental strength. Because we have quality. You see the lineup hasn't changed that much from last year. I think the quality is showing much more because a lot of guys are mentally stronger this year.”

“The system we play is very hard and only giving us two or three months was very difficult and you could see in the first five games we were kind of all over the place, in shambles, giving up goals, and not knowing where to run. And I think we really got it down after that LAFC game. We made a few changes and that kind of helped with the lineup and the structure of how we play and how we're able to defend. We are getting better and better.”

Almeyda is quick to point out how highly he rates Yueill too. The Argentine coach has become very familiar with the league since he was hired in the offseason and insists that Yueill is one of the top prospects in the league and is a player who probably will be bought by bigger European teams in the near future.

"I think he's one of the players with the brightest futures in this league, especially being born the United States,” Almeyda said earlier this season. “I like his personality a lot. In terms of soccer, he is very complete, and I see a big European future for him. He's a player that trains very well, and when he plays in games, he plays the same way he trains. He plays well in training sessions, friendly matches, and in easy and difficult matches. He always plays with the same effort, and it shows that he is a national team player."

Yueill admits that he is interested in moving to Europe at some point in his career but is also quick to point out that he is solely focused on San Jose at the moment. At the moment, however, he is one of several young talented Americans central midfielders in the league who could attract European interest soon. Others include Dallas’ Paxton Pomykal, Colorado’s Cole Bassett, and Philadelphia’s Brenden Aaronson.

But in a sense, Yueill is different from the others and is more of a throwback to an earlier era of American players. While most of the best players are homegrowns who bypasses college, Yueill played two seasons at UCLA and came into the league via the draft where he was the sixth overall pick in 2017.

But when he came in the league, Yueill knew he was behind others and the big indication came shortly after the draft when he was cut by Tab Ramos for the 2017 U-20 World Cup team. Many of the players he was competing against had been established in professional environments and when Yueill was left off the team, it served as motivation for him to work hard and catch up.

“I think with the what the U-20’s, it was hard,” Yueill recalled. “A lot of lot of the young guys were part of a lot of professional teams and I was still just coming out of college. I don't think I was necessarily in the right environment to compete with those guys. And then so when I eventually signed and I didn't make that, I kind of refocused and wanted to prove to myself and everyone else that I'm a national team player and that I can do many good things in soccer.”

But Yueill has indeed caught up and his international future looks bright. While he was not part of the 40-player provisional roster for the Gold Cup team, he was a late addition for the pre-Gold Cup friendly against Jamaica – which he started in a 2-1 loss after only having a few training sessions. The call-up came as a huge surprise for Yueill who was in the DC area after San Jose visited DC United the weekend before.

“And I was really thrilled and excited to hear that,” Yueill said. “I had a few training sessions with the team and then starting in the game. For me though that's one of my biggest dreams was for my first national team camp. So I was very thrilled with that. I know we didn't have a great performance but for me it was a great joy being on the pitch and seeing the fans, wearing the crest. For me that whole experience was awesome.”

Shortly after, Yueill made his way Utah for his first camp with the United States U-23 team for a training camp and that team will be the biggest test for him as he is expected to be a leader. Next year that team will attempt to qualify for its first Olympics since 2008 and it will be an important measuring stick for players of his generation to build a positive trend after two failed attempts to qualify for the Olympics and a failure of the full team to qualify for the World Cup.

“I think everyone in the part of U.S. soccer is under a little pressure at the moment. We have to perform because the last couple of years have been a little shaky. And so I think the full team in the Gold Cup and us with the Olympics I think it's very important for us to do well… I think we have a really good group of players upcoming for this Olympic qualifying cycle. You have a lot of good players who are getting good minutes with their club teams. It's going to be very competitive.”