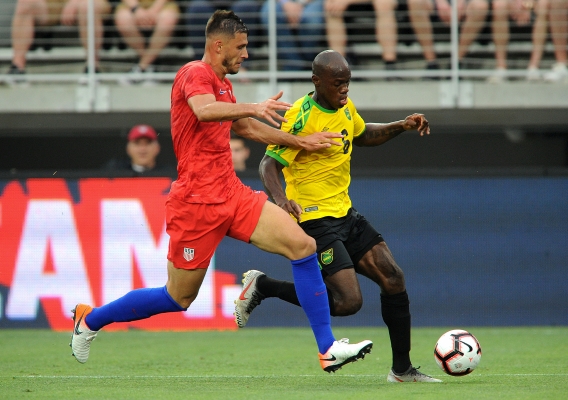 The U.S. national team is heading into the Gold Cup without much momentum after losing its first pre-Gold Cup friendly to Jamaica. The team played poorly, looked confused, and lacked passion. Manager Gregg Berhalter has plenty of work to do head of its June 18 opener in Minnesota.
BY Brian Sciaretta Posted
June 05, 2019
10:00 PM
THE UNITED STATES national team’s Gold Cup preparations took a disappointing turn on Wednesday night when it lost to Jamaica 1-0 at Audi Field in Washington, D.C. Upsets happen in sports but for new manager Gregg Berhalter, the loss must be alarming in how just about every player played far below his potential.

The players lacked both passion and cohesion over the course of the full 90 minutes. No one in particular looked comfortable within the system and formation. This might be far from the best team the U.S. can field for the Gold Cup but playing below the sum of its parts is never a good sign.

Berhalter began the game with a different formation of three central defenders, two wingbacks, four central midfielders, and Josh Sargent as the lone forward. After relatively strong first start, Jamaica quickly found its way into the game with the best chances and more possession.

In the 60th minute, Jamaica moved in front on a beautiful goal from Shamar Nicholson. The long range strike was made possible from Wil Trapp’s inability to close down defensively on Nicholson who created space for a 25 yard shot past Zack Steffen.

Shamar Nicholson's 1st career international goal is a SCREAMER to put Jamaica up 1-0 on the USMNT. #USAvJAM pic.twitter.com/A321agevh9

The U.S. gained a little more offense with its substitutes. Duane Holmes, in particular, was effective in his international debut. The Derby County attacking midfielder was useful in his ability to win the ball back and quickly get it forward. Jonathan Amon also had a few nice moments offensively but wasn’t much better than his teammates in helping to win possession back.

In the end, the whistle sounded with the U.S. team starting off its important month ahead in disappointing fashion. Next up will be its second and final pre-Gold Cup tune-up against Venezuela.

Berhalter will submit the U.S. team’s final Gold Cup roster by midnight and it is unlikely that many of the players who played today helped their case if they were on the bubble.

Here are a few thoughts

Lack of defense hurt everything


One of the key reasons why the U.S. was so poor on the night was its inability to win the ball once possession was lost. No one played with any defensive bite and as a result, often had to chase the Jamaican players all around the field.

This was the complete opposite of how Berhalter has repeatedly said he wants the team to play – a disruptive force that can pounce into the attack on turnovers and generate chances. No one did that in this game. At one point in the second half, Jamaica connected over 20 straight passes without much pressure.


Poor off the ball movement


Whenever the U.S. team was able to win the ball back, the team was completely static up the middle of the field. Off the ball movement was poor and there were such narrow avenues of attack.

Wingbacks Paul Arriola and Antonee Robinson weren’t great, but they were being asked to do too much since Roldan and Mihailovic weren’t moving particularly well. With only a few players making runs and trying to get into dangerous areas, Jamaica’s defenders weren’t stretched thin. Focusing on Robinson, Arriola, and Sargent was a pretty easy task.

A lack of passion


Yes, it was just a friendly, but the U.S. team played with such little passion and heart in this game. That must have been disappointing for American fans as this team has failed to excite since the 2016 Copa America semifinal run. The team has not played a meaningful non-friendly game in 20 months. The end of the Klinsmann-era was a disaster and Bruce Arena failed to right the ship. Dave Sarachan didn’t have an easy hand and wasn’t in a situation to provide direction.

With the program having been dragged through the mud for so long, supporters were hoping for passion and, once again, did not get it.


Duane Holmes had a strong debut. He was one of the few Americans who made a positive impact in the game. He had nice clean touches and crisp passing but his biggest impact is that he was able to win the ball back from Jamaica whenever they had the ball near him. Holmes played the game the way Berhalter wants.

If Holmes was on the bubble and this game was a sincere audition, he passed it. It is hard to imagine that anyone else did.