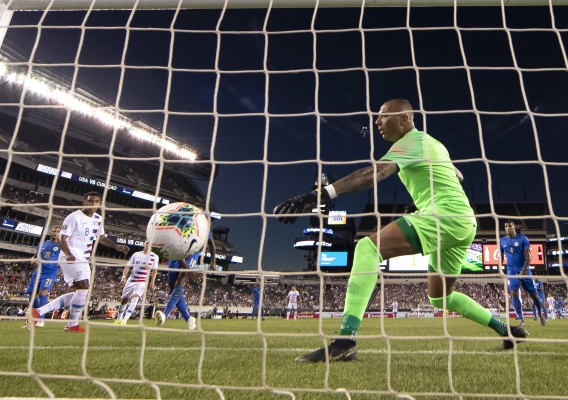 THE USMNT was lackluster in its win over Curacao on Sunday night and while any team advancing to the semifinals should be progressing, the USMNT now has more questions than answers.
BY Brian Sciaretta Posted
July 01, 2019
1:00 AM
WHILE THE UNITED STATES national team advanced to the semifinals of the Gold Cup on Sunday night in Philadelphia with a 1-0 win over Curacao, the win was very uninspired and it left more questions than answers as to the direction of the team in this tournament.

To be fair, the United States actually started off the game playing well. It controlled possession and opportunities for the first 23 minutes. Christian Pulisic had a nice run from distance and while he had Tyler Boyd and Gyasi Zardes open on the break, he elected to shoot it instead – which went just wide.

Minutes later, Pulisic took a pass from Paul Arriola inside the box but his shot was nicely saved from Eloy Room.

In the 25th minute the U.S. team finally scored on a beautiful 14-pass sequence ended with Pulisic beating his defender and hitting an arcing cross which found the head of McKennie for the goal.

But following the goal, the U.S. team was never able to put the game away. Curacao gradually improved and the U.S. team slowly fell apart. By the second half, Berhalter’s team was extremely sloppy and unable to generate any decent chances.

Curacao nearly equalized in the 86th minute when Cardiff City’s Leandro Bacuna hit a hard shot from distance but Zack Steffen was able to keep out of the back of the net after making a diving save.

"We had the opportunity early to put a couple goals in, and we didn't do that.," Berhalter said. "We kept them hanging around. Then they were very compact."

If the U.S. team wants to win the Gold Cup, this performance was concerning. Curacao is not a bad team and consists of a lot of Dutch-born professionals (with ties to the Caribbean island through acenstry) playing at relatively high levels. Still, much tougher opposition awaiting.

The U.S. team will play Jamaica on Wednesday in Nashville. Jamaica won the team’s last meeting 2-1 in Washington, DC earlier in the month in a pre-tournament friendly. After that would be a possible meeting against Mexico in the final in Chicago.

But thinking about the final is useless at the moment as the U.S. team will have to be significantly improved or else its tournament will be over.

Here are some thoughts on the win over Curacao


The U.S. team had one of its sloppiest games in recent memory. Newcomer Tyler Boyd and Gyasi Zardes were particularly wasteful in the attacking third of the field. Zardes was simply way too slow on too many occasions that it hurt the flow of the game.

Boyd had nearly 15 turnovers before he was taken out and seemed to be way off combining with his teammates.

While Boyd and Zardes were the most noticeable weak links, they were far from the only culprits. Michael Bradley wasn’t sharp with his long-range passing. Weston McKennie scored the lone goal but also failed to help take control of the midfield – especially in the second half.

Winning the ball back


Berhalter has repeatedly said that he wants to create chances through disruption, forcing turnovers, and having a quick transition to catch opponents off guard.

That has been a huge weakness for the team in the two most fundamental areas. First, most of the team struggles to win the ball back. This is one of Tyler Adams’ strengths as a player and he will help when he returns to the team. Paxton Pomykal is also very useful defensively and offensively and his eventual introduction will be a boost. But right now, in this tournament? It’s bad.

The second biggest weakness is that even when the team is able to force a turnover, they aren’t generating enough immediate chances. For example, Curacao has been quick to retreat when they turn the ball over and get into a well-organized defensive set up.

The U.S. team won a few turnovers but the first pass was often back, or lateral. There weren’t enough occasions (particularly after the U.S. scored) where the U.S. team won the ball and immediately went into a break to catch Curacao off-guard before they could set up. The first U.S. chances were off nice breaks but then after the goal, the U.S. lacked killer instinct to go for the second goal to open the floodgates.

The Defense was decent


The U.S. team’s backline was actually pretty good and above most criticism. Curacao had shots in the second half but few of them were of a high quality. Generally, the defense was able to deal with whatever Curacao was able to throw its way. Through four games now, the U.S. team is yet to concede a goal.

Aside from Christian Pulisic, Walker Zimmerman was the best field player for the United States in the game. He was constantly trying to make aggressive and line/splitting passes out of the back to play attackers into dangerous positions. Sometimes it didn’t work but several times it did. But it was particularly encouraging to see a player take some chances to create and break through the opponents organized setup.


Jamaica is going to be a very difficult opponent whose players also have the confidence knowing it can beat this U.S. team.

Looking back on that game, Jamaica was able to stroll through the midfield without much defensive pressure from the United States. From there, it was only a matter of time before they were able to find a winner.

The U.S. team needs to improve in a lot of areas, but the Michael Bradley/Wil Trapp combination in defensive midfield is perhaps the most important. On the defensive side of the ball, these two have to stop Jamaica from setting up its offense in the middle area of the field. Jamaica will be very difficult and if the U.S. team makes the final, Mexico could be an absolute nightmare.

This, of course, is going to be a big test for Berhalter in terms of identifying weak areas, finding ways to improve, and building up confidence. There are some key questions. For one, the starting lineup against Curacao has started three of the team’s four games in this tournament. How willing is Berhalter to break it up? Or is Berhalter looking to see this lineup grow? If fit, Altidore seems like an obvious replacement for Zardes. But is Berhalter willing to change formations to provide support in some areas?

For better or for worse, we are going to know a lot more about the players, the team, and the coach one week from now.