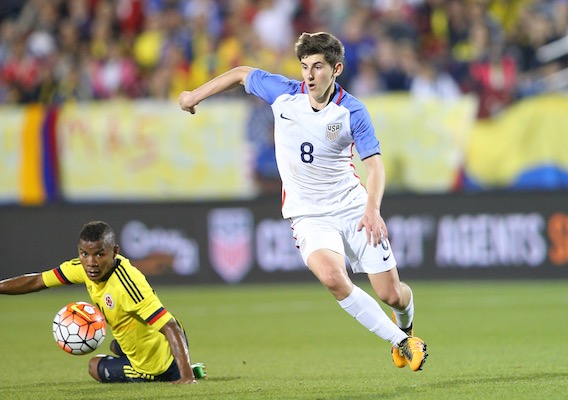 Is it time to shake things up in the U.S. national team midfield? Christian Pulisic is already part of the mix, and budding stars like Emerson Hyndman, Kellyn Acosta, and Paul Arriola could be next.
BY Brian Sciaretta Posted
April 18, 2017
10:00 AM

Emerson Hyndman, 20, has already proven that he can be an impact player at club like Rangers. While the Scottish Premier League has fallen in quality over the past decade, expectations and responsibility are high at the Glasgow club.

Since arriving in January, Hyndman has been a consistent starter, scoring key goals and registering meaningful assists in the process. On Saturday, the Texan turned heads again with a stellar assist when he set up Jon Toral for the second goal in a 2-0 win over Partick Thistle.

? | @emersonhyndman and Jon Toral combined wonderfully to score one of the best #SPFL goals of the weekend ???? Goal of the Month contender? ???? pic.twitter.com/DnhreQhjvA

Hyndman is one of several young and upcoming American midfielders who could become a big part of the national team in the near future. With the brilliant Christian Pulisic, Kellyn Acosta, Paul Arriola, and now Hyndman there are several American players who are already important part of the first teams at their respective clubs. Other talented Americans, like Tyler Adams and Brooks Lennon, are also in promising situations.

Hyndman's loan to Rangers will expire after the season and he needs to continue to progress. Will that be at his parent club, Bournemouth? Or will he find another suitable place on loan? That will require finding another team where he was just as good of a fit as he is for Rangers. These decisions are crucial for one of the more promising American prospects abroad.

Most of the Americans in Germany have been struggling, with Timothy Chandler and Eintracht Frankfurt having won just once in its last 11 and John Brooks and Hertha having dropped four of five. Alfredo Morales and Terrence Boyd are heading for relegation and Aron Johannsson can’t get off the bench.

But Christian Pulisic enjoyed another special moment on Saturday as he assisted on Marco Reus’ third-minute goal in a 3-1 win over Eintracht Frankfurt.

Pulisic and the entire Dortmund showed a lot of maturity in the contest, especially after suffering through a terrorist attack just a few days earlier. In a disgraceful decision, UEFA delayed the game vs. Monaco by just a single day and Monaco posted a 3-2 win in the first leg. The emotional whirlwind that the Dortmund players had to deal with was unfortunate and the Pulisic assist helped to get the players and the team back on track.

Last year, American Soccer Now ran a feature on Venezia FC and its new American ownership — a group that was eyeing a return to Serie A.

Venezia FC was promoted to Serie B on Saturday following a 1-1 draw with Fano. This comes on the heels of a promotion last year to Liga Pro (Italy’s third tier). The club was very ambitious in its goals and all but guaranteed promotion this year. It is not often to hear such bold goals from new owners but so far Venezia has lived up to the billing.

Americans have been at the forefront of the promotional race in the English Championship from the start of the season. DeAndre Yedlin and Newcastle United are favorites to go up. Huddersfield, which is managed by former U.S. international David Wagner, has surprised everyone and will likely be in one of the four playoff positions. The story is the same with Reading and Fulham.

On Monday, Fulham finally snuck into the playoff spots following a 3-1 win over Aston Villa at Craven Cottage. U.S. international Tim Ream went the distance in central defense for the Cottagers—which has won four of its last five. Ream has made 25 starts this year and is a nearly automatic selection for the London-based club.

It won't be easy for Ream and Fulham. The club holds sixth place right now on goal differential. With just three games left to play, Fulham has road games against fourth place Huddersfield and fifth place Sheffield Wednesday and will need to get results if it hopes to make the postseason playoffs.

Cameron and Stoke down Hull City

Geoff Cameron, 31, is playing well these days and on Saturday the U.S. international helped Stoke City snap a four-game losing streak with a 3-1 decision over Hull City. Stoke City is in the same position it seems to be in every year—safe from relegation but out of reach of European play.

In the game, Cameron played defensive midfield and completed nearly 75% of his passes while having the most touches of any Stoke player. Defensively, Cameron proved valuable as he helped break up Hull opportunities and get the ball quickly into the attack.

The fact that Cameron is playing defensive midfield presents an interesting question for U.S. national team head coach Bruce Arena. Right now Michael Bradley and Jermaine Jones are the first-choice central midfield candidates—although Arena hinted he could give other players an opportunity.

Is Cameron going to sneak into that equation into the central midfield or will Arena prefer to keep Cameron in central defense alongside Brooks, with whom he has played well. There are some interesting options to consider in the days ahead.

There are always Americans scattered throughout Europe and one player to keep an eye on is central defender Brenden Hines-Ike. The 22-year-old has locked down the starting job at Orebro in Sweden’s top tier.

On Saturday, Hines-Ike went a full 90 in a 2-1 win over Ostersunds FK, helping his team to seven points through its first three games. As a result Orebro is in second place and only trails leaders Malmo on goal differential.

Next up for Hines-Ike, a Denver native, will be a road matchup vs. Elfsborg.

Fabian Johnson: The United States international continues to miss time after suffering a pulled hamstring in a Europa League game right before the international break. U.S. head coach Bruce Arena expressed concern recently, saying Johnson has not responded well to treatment. Monchengladbach fell to Hoffenheim 5-3 over the weekend and is in ninth place in the Bundesliga.

: On Sunday, Matt Miazga took himself out of Vitesse’s 1-0 loss Excelsior in the first half with a tight hamstring. Sources have told ASN that the injury is minor and no tears or pulls of the muscle were detected. It is unclear if Miazga will be healthy for Sunday’s clash against Eredivisie leaders Feyenoord but he should be ready to go for the Dutch Cup final on April 30. In that game, Vitesse will attempt to win its first major trophy in club history.

Bobby Wood: Bobby Wood missed Hamburg’s 2-1 loss to Werder Bremen on Sunday after suffering a knee-to-knee collision with a teammate in training last week. On Monday, Hamburg revealed Wood would return to training sometime this week. This Saturday Hamburg hosts last-place Darmstadt with a chance to pull further away from the relegation zone.

DeAndre Yedlin: The Seattle native has been out of action since March 4 but came off the bench to play six minutes on Friday during a 1-1 draw with Leeds United. On Monday, Yedlin returned to Newcastle’s starting lineup but the club suffered a 3-1 loss to Ipswich. Newcastle has not played particularly well as of late but it still has a six-point cushion for automatic promotion back to the Premier League.