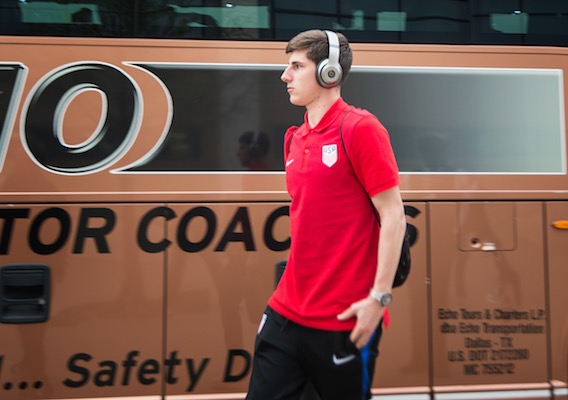 Hyndman, Holmes, and Perez highlight busy day for Americans on the move

It's been a very busy day for several American players including Emerson Hyndman, Duane Holmes, Josh Perez and others who are all looking to take a step up with their careers. Brian Sciaretta is here with the latest.
BY Brian Sciaretta Posted
August 09, 2018
6:30 AM
There has been a lot of news breaking regarding several American players who are looking to move upward with their career. Here is a look at some of the top stories.


In a move that probably should have happened a year ago, AFC Bournemouth’s American midfielder Emerson Hyndman will return to Scotland on loan with Hibernian.

Hyndman, 22, spent the second half of the 2016/2017 season on loan at Rangers where he was very successful and popular with the supporters – who wanted to bring him back the following season. But Hyndman suffered an injury in the 2017/18 preseason and remained with the club for the entire year – despite rumors of a January loan. He made his Premier League debut for Bournemouth in the season finale.

Now Hyndman will return to Scotland and play for a Hibs side that finished fourth in Scotland last year and is in the middle of Europa League qualifying. He could even make his debut as soon as tonight against Molde.

There are positives and negatives with this loan. The good is that Hyndman will play regularly as Hibs recently unloaded several midfielders over the summer. But Hyndman has the potential to not only play, but to also be one of the best players on his team. Thus far in his pro career, he’s only played 3100 first team minutes between Fulham, Bournemouth, and Rangers. He is capable of a lot more.

Another positive is that this loan is also for six months and it will allow for another move in January should Hyndman impress.

Of course the negative is that Hyndman is returning to a league where he has already proven himself. Nearly two years later, he is still in the same league. It is a reminder that he is not pushing upward.

But the fact that he didn’t go on loan last year is now in the past and Hyndman needs to get back on the field. The best way he can do that is go to a familiar place where he is comfortable. Then he can begin to climb the ladder again.


Former U.S. youth national team winger Josh Perez joined LAFC at the MLS deadline from Fiorentina. Perez, 20, has been with the Italian club for three years but only made one appearance. Last year he went on loan to Livorno in Serie C and made 23 appearance but all were off the bench and he played just 455 minutes.

Unlike Emerson Hyndman who had a great loan to Rangers, Perez has never established himself anywhere as a regular player yet. Fiorentina was willing to let him go for free and that suggests Perez was unlikely to be in the team’s plans.

LAFC should have one of the best attacks in MLS after making a series of moves ahead of the deadline. In addition, he will be playing near home for Bob Bradley who is one of the league’s best coaches.

After making his Serie A debut in 2016, Perez has struggled for meaningful playing time but perhaps this will be the needed step to jumpstart his career.


ASN has learned that American attacker Duane Holmes, 23, will be moving to Derby County in the Championship. Last year Holmes was widely considered to be the best player on Scunthorpe in League One as the club pushed for promotion but was eliminated in the playoff.

Now he will be moving to the Championship – where he began his career for Huddersfield.

Holmes was born in Columbus, Georgia but was raised by his mother in her native England. Despite that, Holmes has dreamed of playing for the United States internationally but has never been given the opportunity at any level.

There is no question that if Holmes can succeed at Derby, he could very well work himself into the picture. Derby is one of the better teams in the Championship and last year fell short of promotion in the playoffs. This year, the club is expected to make another push for a return to the Premier League.

It seems like a smart move for Holmes. At his age, he should be seeking out an opportunity that will allow him to reach his ceiling. This seems like a good opportunity to step into that spotlight and earn recognition in the United States – something that has not yet happened.

Amon gets a shout-out


Alexander Zorniger, manager of Danish Superliga leaders Brondby, was put on the spot & asked if he could choose one player from Nordsjaelland to be on his team, who would it be? No hesitation: U.S U-20 winger Jonathan Amon. He explains why too. Watch this #USMNT pic.twitter.com/equm85szwh


United States national team left back Jorge Villafana is returning to Portland in MLS where he won MLS Cup in 2015. Over the past two years, the California native has played in Mexico with Santos Laguna.

Villafana will turn 29 next month and is excited about a return to the club that helped take his career to the next level. He will also leave Mexico as an accomplished Liga MX player where he went through long stretches as the team’s starting left back and won the Liga MX title for the 2018 Clausura.

His national team prospects remain strong. While Antonee Robinson at Wigan might have overtaken him as the U.S. team’s starter at left back, no clear backup has emerged yet and Villafana still might still have a grip on that role.

I’ve been sitting here trying to figure out how to express how excited I am to go back to Portland. But there is so much emotion I can only thank @MerrittPaulson @GavinW for making this posible “I’M COMING HOME”