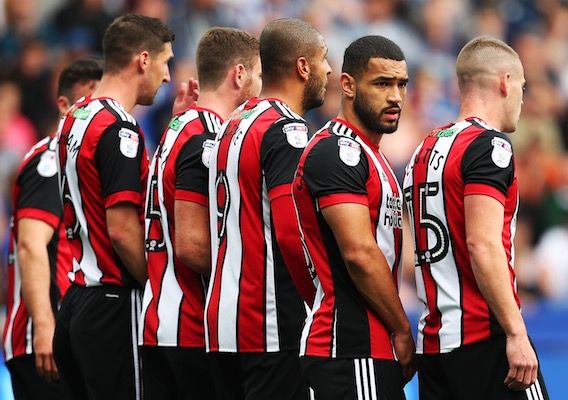 Huge Weekend for Young Yanks in Europe and Mexico

Cameron Carter-Vickers, Jonathan Gonzalez, Luca de la Torre, and Shaq Moore all made strides in their professional development over the weekend, and ASN's Brian Sciaretta has the updates right here.
BY Brian Sciaretta Posted
October 31, 2017
3:00 AM

THIS PAST WEEKEND was promising for Americans abroad as two younger players showed signs of inching toward regular first-team minutes. Meanwhile, Cameron Carter-Vickers is making eye-opening strides in his first professional season with Sheffield United. At a time when younger players need to be stepping up, it is happening both domestically and now abroad.

On the injury front, Eintracht Frankfurt's Timothy Chandler underwent surgery to repair the meniscus on his right knee and is out two months. In a very promising sign, Gent’s Kenny Saief has returned from the infection suffered after a hernia surgery and played for Gent’s U-21 team last week.

But so much of the focus in American soccer is on the younger players and with that new shift, there is plenty to be happy about. Weston McKennie continues to play for Schalke and Ethan Horvath is a mainstay in goal for Club Brugge. Antonee Robinson and Haji Wright are developing while on loan with second-tier clubs. DeAndre Yedlin is still only 24 and he is starting every game for Newcastle in the Premier League and Matt Miazga has emerged as a very strong Eredivisie central defender.

Here are the top stories from the past week.

Last season many American fans were clamoring for Tottenham to send Cameron Carter-Vickers on loan to get some needed playing time. That finally happened after the summer preseason when Carter-Vickers was sent to Sheffield United in the Championship.

There is no other way to put it: This has been an absolute dream loan for the young American.

Carter-Vickers has firmly entrenched himself in the starting lineup for Sheffield United. He’s made some mistakes, as any 19-year-old central defender will do, but the team has continued to stick with him, putting him in the middle of a three-man backline. Now he’s making fewer and fewer errors. Unsurprisingly, Sheffield United continues to win.

On Friday, Carter-Vickers has his best outing yet as he went the distance in 2-1 road win over fourth place Leeds United at Elland Road. That win sent Sheffield United to the top of the Championship table.

If Carter-Vickers continues to play this way, Tottenham might actually find a place for him on the field or be able to sell him to another Premier League club for a hefty pricetag.

Also, Carter-Vickers looks like a no-brainer to be on the national ream roster for the 2017 finale against Portugal.

The breakout season for Jonathan Gonzalez, 18, continued on Saturday night as Monterrey beat rivals Club America 2-0. Gonzalez went another full 90 as Monterrey enhanced its grip on top of Liga MX with 33 points through 14 games—five points clear of second-place Tigres.

For his part, Gonzalez turned in another performance that earned praise from the media as being among the best in Liga MX for the weekend. It is recognition he has earned multiple times for being part of a team that has conceded just nine goals all season

So far this season, Gonzalez has amassed 1,041 league minutes and another 180 in the Copa MX. Along with Carter-Vickers, Gonzalez seems like a must-call for the U.S. team’s game against Portugal. Both are teenagers who are major contributors on very good teams.

Luca de la Torre, 19, has been a consistent presence on U.S. youth national teams, having played at numerous age groups as well as at U-17 and U-20 World Cups. On Saturday, de la Torre came on for Fulham in the 89th minute of a 1-1 draw against Bolton. After playing in a League Cup match last year, Saturday marked de la Torre’s Championship debut.

When he entered, Fulham was trailing and de la Torre looked lively in his few minutes as Fulham scored an equalizer. At the time there were three Americans on the field: Tim Ream and Bolton’s Antonee Robinson were also playing.

If de la Torre can get start to get regular minutes, he will be an interesting prospect to follow.

On Sunday, former U.S. U-20 right back Shaq Moore made his La Liga debut in Spain for Levante, playing the final 19 minutes in a 2-2 draw with Eibar.

Moore, 20, made his debut for Levante last Thursday when he went a full 90 in a 2-0 away win over Girona in the Copa del Rey. Just three days later he made his first La Liga appearance as Levante moved into 11th place in Spain’s top flight

The U.S. national team desperately missed the injured John Brooks as its World Cup qualifying campaign crashed and burned in September and October. After setting an American record for a transfer fee over the summer, Brooks is ready to get the Wolfsburg phase of his career underway.

On Saturday, Brooks made his first Bundesliga appearance for Wolfsburg and played well, completing 90% of his passes and leading his team with six clearances.

Only 24, Brooks has already played in a World Cup and will still be shy of 30 when the 2022 tournament rolls around. This next cycle will be a critical time for him to become a foundation of the backline.