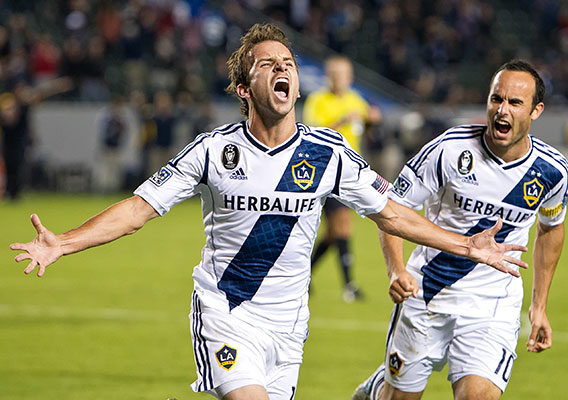 Keep tabs on the ASN 100 with Josh Deaver's weekly update. From Sacha Kljestan's volley for Anderlecht to Alfredo Morales' well-taken penalty, we have the updates and the highlights here.
BY Josh Deaver Posted
November 12, 2012
5:35 PM
Landon Donovan—ASN Rank No. 4
With a definitive 3-1 win on Wednesday night, spurred by two superb second half assists from Donovan, the Los Angeles Galaxy were able to advance in the MLS playoffs by eliminating the San Jose Earthquakes. In the first leg of the Western Conference Finals on Sunday, Donovan was once again inspirational, adding one more assist and bossing the field in a dominant 3-0 win against Seattle. Unfortunately for the Galaxy, the all-time American goal scorer left the field late in the match with what appeared to be a hamstring injury. Jozy Altidore—ASN Rank No. 9
On Saturday, during AZ’s 2-2 draw with ADO Den Haag, Altidore added another goal to his already-impressive 2012 highlight reel. After corralling an errant ball in the box, Altidore cleverly shook his defender and fired a left-footed, half-volley rocket into the net for his ninth Eredivisie goal this season. Supporters will remain hopeful that Altidore can duplicate his club form for the National Team, as he has joined the squad for Wednesday’s friendly against Russia. Sacha Kljestan—ASN Rank No. 15
It’s been a massive turnaround in recent weeks for the former Chivas USA man. After failing to see the field for almost all of October, Kljestan has become a fixture in the Anderlecht starting XI. In Champions League action on Tuesday, Kljestan played 90 minutes and delivered the winning assist in a hard fought 1-0 victory against Zenit St. Petersburg. On Sunday in league play, Klestan scored his first goal of the season with a wonderful volley in a 6-1 demolition of rival Club Brugge. Since Kljestan reentered the lineup, Anderlecht has won four straight games by a combined total of 16-2. Jermaine Jones—ASN Rank No. 17
It was another week of strong performances for the U.S national team's resident enforcer. On Tuesday in Champions League action, Jones put in a productive shift in a 2-2 comeback draw versus Arsenal and, yes, picked up a yellow card. On Saturday Jones played 90 minutes and delivered the winning assist in a 2-1 win over Werder Bremen, putting Schalke in sole possession of second place in the Bundesliga. Timothy Chandler—ASN Rank No. 18
On Friday ASN100 panelist Brian Sciaretta confirmed German reports that Nuremberg defender Timothy Chandler would return to the U.S national team when the squad faces off with Russia on Wednesday. The game will mark the first time since the November 2011 friendly against Slovenia that Chandler has suited up for the United States. Brad Guzan—ASN Rank No. 21
After a series of point-saving performances, the 28-year-old keeper was named Aston Villa player of the month for October. Since earning a starting role, Guzan has arguably been the most valuable player at Villa Park and without his heroics it is clear that the woeful Villains would be in the relegation zone. In Saturday’s matchup with Manchester United, Guzan and Villa squandered a 2-0 lead against the league leaders and ultimately lost 3-2 in heartbreaking fashion. Fellow American Eric Lichaj was suspended due to yellow card accumulation. Alejandro Bedoya—ASN Rank No. 49
Continuing his excellent run of form for Swedish side Helsingborg, Bedoya netted a 67th-minute equalizer versus compatriot Steve Cherundolo and Hannover in midweek Europa League action. However, when two Helsingborg players were sent off in the final minutes, Hannover won a penalty kick and escaped with a 3-2 victory. After the match Bedoya tweeted, “So frustrated!! How can the referee kill the game with such a bad call!! Just sums up our season = So Unlucky!” Nick DeLeon—ASN Rank No. 61
If it wasn’t his already, 22 year old D.C United winger Nick DeLeon is making a late push for MLS Rookie of the Year honors. After scoring the only goal in D.C’s 1-0 win versus New York Red Bulls on Wednesday, DeLeon tallied his eighth of the year in a 3-1 loss to Houston Dynamo on Sunday. Alfredo Morales—ASN Rank No. 69
After a quiet opening to the season, the U-23 defender has recently come on strong for Hertha Berlin II in the German fourth division. The Peruvian-German-American was able to convert a second-half penalty in a 2-1 loss to Zwickau and has now scored three goals in the last four games. Andrew Wooten—ASN Rank No. 89
The good news: U-23 forward Andrew Wooten scored his first goal of the season for 2.Bundelsiga side Sandhausen. The bad news: Sandhausen lost their fifth straight match, an embarrassing 6-1 defeat to Hertha Berlin, and are now last place in the German second division. Mike Magee—ASN Rank No. 93
Call him Mr. November. Although overlooked on a star-studded LA Galaxy squad, midfielder Mike Magee has been playing some inspired soccer during this most recent playoff run. On Tuesday, Magee was able to score as well as notch an assist in LA’s series clinching 3-1 win versus San Jose. On Sunday against Seattle, McGee was back at it again, scoring his fourth goal in five games. Since joining the Galaxy in 2009, Magee has eight goals in 18 MLS postseason appearances. Josh Deaver is a former academic turned soccer obsessive. Follow him on Twitter for daily updates and musings.