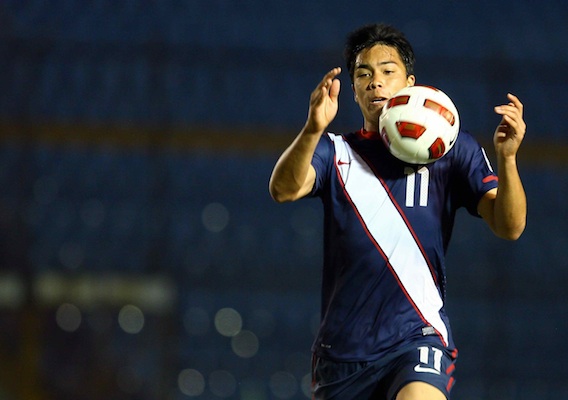 Hot or Not: Wood Works His Way Up the Charts

The young American attacker looks like he has finally recovered from a knee injury that plagued him earlier in the year, and he is making an impact in Germany. Meanwhile, there's little ado about Edu.
BY Jon Arnold Posted
December 05, 2012
8:57 AM
Who’s Hot? Bobby Wood: The Hawaiian has made appearances in 1860 Munich’s previous three matches, starting the last two. The forward is making the most of the opportunities, partnering smartly with Benjamin Lauth in his first start and netting the equalizer in a 1-1 draw with Aalen. Wood got the ball near midfield and took the ball to the top of the 18 before smashing it over the keeper.
A 1-1 M - All Goals by Ricardo109x He hasn’t played much, but the 20-year-old is doing enough to get American fans excited about his future. Edgar Castillo and Joe Corona: Not only did the American duo just win the Liga MX Apertura championship with Tijuana, they made significant contributions doing so. Initially, Corona started in the playoffs only because of an injury to Tijuana’s normal first-teamer, but he showed so well that he continued to get starts. The last match was his best, helping Xolos to a strong attack in the away leg before being replaced for a more defensive player. Meanwhile, Castillo filled his role well, joining into the attack at every opportunity. Who’s Not? Clarence Goodson: The much-maligned center back has always kept a good record with his club, even if he’s stumbled at times playing for his country. That no longer seems to be the case. Goodson hasn’t seen action with Brøndby since his appearance with the United States against Russia on November 14. There was speculation that he was initially left out of the club because of injury, but he was able to make the bench last weekend. In the midweek and weekend matches he was completely dropped from the squad due to a concussion, though we could see him back after Michael Parkhurst's Nordjaelland took a 3-0 win Sunday. Maurice Edu: Edu was named to Stoke’s 18 this weekend, but it took an injury to another Stoke player to get him there as Michael Owen's hamstring problem that kept him out of the team. It’s a reminder that Edu has played just nine minutes for the Potters since his move to the club in the offseason. Edu is 26, but with struggles first to find a club and second to find the field, time is of the essence if he’s to make it to Brazil in 2014.