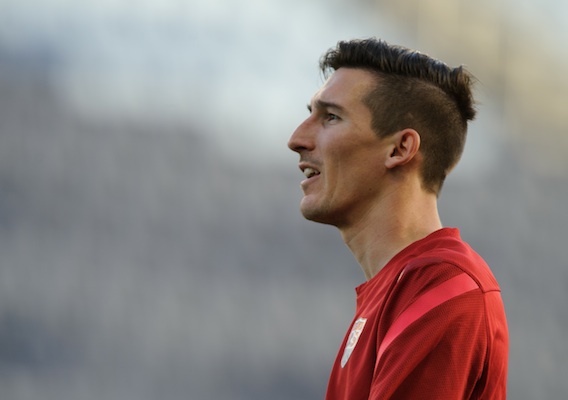 The Anderlecht midfielder keeps helping his team to wins, while a former United States national team striker continues to slip further and further away from the player pool.
BY Jon Arnold Posted
November 28, 2012
8:06 AM
Who’s Hot? Fabian Johnson: The defender was Hoffenheim’s Man of the Match in a 2-1 loss to Bayer Leverkusen this weekend. He found some success crossing from his left back spot, but his largest impact was felt when he took matters onto his own feet, getting inside the box, cutting to his right foot and firing in a goal.
Hoffenheim - Bayer Leverkusen 1-2 25.11.2012 by XxlGoals Johnson struggled in October, missing the USMNT’s World Cup Qualifiers with an illness, then being unable to recover his club form after that, but he’s made up for it with a sterling November. Sacha Kljestan: Kljestan continues to make his mark on the Jupiler League, playing every minute for the club in both a Champions League match last week and a cup fixture—one that went to extra time—Tuesday. In between, he played 83 minutes in a 4-1 thrashing of Beerschot. Anderlecht currently sits atop the league and the American is a big part of the success. Juan Agudelo: A few weeks ago, Agudelo was on the wrong side of this feature, struggling to get goals at Chivas USA and seeming to have disappeared from Jurgen Kilnsmann’s plans. The young striker finished the season well with the Goats, got a call-up to play against Russia, and has impressed so much during his trial with Celtic that Neil Lennon is hoping to put Agudelo in hoops. Oh, plus he celebrated his 20th birthday last week. Who’s Not? Charlie Davies: Randers in the Danish Superliga seemed like it would be a good spot for Davies to resurrect his career. It was an off-the-map situation that should have provided plenty of minutes for the forward to find his form. Unfortunately for Davies, he hasn’t been able to get in the Starting XI, and sees most of his action in a supersub role. He won’t increase his chances at minutes after being sent off for a foolish headbutt in retaliation for being fouled last week.