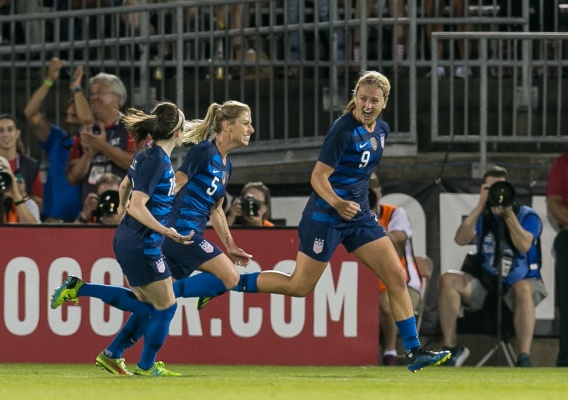 The United States women's national team struggled against Australia and trailed throughout. It wasn't until a late strike from Lindsey Horan gave the U.S. team a point. The Americans likely won't be happy with their effort and ASN's John Halloran is here to break it down.
BY John Halloran Posted
July 30, 2018
8:00 AM
THE UNITED STATES women’s national team pulled off a dramatic comeback on Sunday night in East Hartford, notching a goal in the 90th minute to tie Australia 1-1 in the Americans’ second match of the Tournament of Nations.

The Matildas struck first in the contest, capitalizing on a counter attack which Chloe Logarzo finished off in the 22nd minute. Despite a number of chances over the next hour of play, the U.S. couldn’t find an equalizer until Lindsey Horan made the most of a late corner to level the score and give the Americans a draw.

Here are three thoughts from the contest.

SUB-PAR EFFORT ALL AROUND


Looking at the play of the Americans on Sunday, it’s tough to say anyone stood out.

Up front, Tobin Heath didn’t get on the ball enough to make a difference, while Megan Rapinoe saw plenty of opportunities and wasted her services time and again. Alex Morgan, despite a handful of chances, couldn’t find the back of the net.

The American midfield, for their part, put together some nice combinations and, at times, impressed with its free-flowing play. However, a number of key giveaways put the team in peril—several of them unforced errors.

Even the goal against the U.S. resulted from a series of mistakes. On the play, Megan Rapinoe put in a poor service that failed to clear the first defender. Becky Sauerbrunn then stabbed at Lisa De Vanna and missed, loosing the Aussie striker for the counter. Morgan Brian got beat for pace and failed to make a tactical foul. Abby Dahlkemper then waited too long to step, while Emily Sonnett let a diagonal run go unmarked. Finally, Alyssa Naeher failed to come off her line and put any real pressure on the shot once Logarzo got in behind.

Logarzo finishes off the counterattack for the Matildas after a great run by De Vanna. #ToN2018 pic.twitter.com/riyv4KzeKq


The U.S. women have been on an incredible unbeaten streak over the past year. Since losing to Australia 1-0 in the 2017 edition of this tournament, the Americans have gone on to beat Brazil, Japan (twice), Canada, Germany, and England. Those five teams are currently ranked No. 2, No. 4, No. 5, No. 6, and No. 7 in the world.

The loss last summer forced head coach Jill Ellis’ hand. Following the defeat, she abandoned the 4-2-2-2 which had looked static over the spring and early summer and moved to a 4-3-3 which gave life to the American attack. Ertz became a fixture—and lynchpin—in the U.S. midfield two years after earning top XI honors in the 2015 World Cup as a center back. And now playing as a pure winger and largely free of long tracking runs into her own third, Rapinoe became more effective than ever.

Only a true cynic would allow one loss to overlook all the good that has come out of the past year, but if there’s one thing the U.S. fan base does not handle well, it’s losing. And despite the subpar individual efforts all across the pitch on Sunday, Ellis’ tactical and personnel choices were sound. A loss would have invited another round of panicked criticism, this time unfounded.


Looking towards the last match of the tournament, a contest against Brazil later this week, there are several things the U.S. might look to do.

In the midfield, Ellis could choose to give Sam Mewis a start. The North Carolina midfielder has been limited this year with a knee injury, but if she’s healthy and ready to go, Mewis’ passing skill and range could be the key to get the U.S. attack moving after a sluggish performance on Sunday.

In the back, Ellis could choose to continue the rotation of center backs and go with Sauerbrunn and Tierna Davidson—who started the first match against Japan—in the middle. Casey Short, who thus far has been limited to two late cameos, could also be used for Emily Sonnett.

Many U.S. fans would like to also see a rotation at goalkeeper, with many hoping Adrianna Franch might finally get a look, but Ellis indicated this week in Connecticut that she’s already committed to giving Naeher all three starts in the tournament.

The match against Brazil is on Thursday in Bridgeview, Illinois (7:30 CT, FS1).