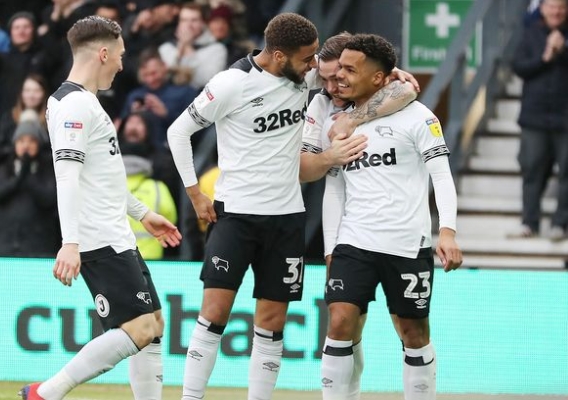 The European season for Americans abroad has improved significantly in recent weeks as players like Duane Holmes and Tim Weah continue to breakout. Meanwhile, regulars like Weston McKennie and DeAndre Yedlin helped their teams to important wins.
BY Brian Sciaretta Posted
January 21, 2019
7:00 AM
THIS PAST WEEKEND was a lot of fun for Americans in Europe with a trio of surprising goal scorers and others playing important roles in impressive wins.

Here were the top stories of what you need to know from the weekend.

One of the most interesting Americans from the current season in England has been Duane Holmes who is quickly becoming an important part of Derby County’s promotional push to the Premier League. After making the move up from League One’s Scunthorpe United, it took a few months for Holmes to break in at Derby.

But ever since he has, Holmes is routinely been one of his team’s most explosive attackers. On Saturday he put in his second Man of the Match performance.


The goal he scored in the third minute put Derby County on track for a 2-1 win over Reading. The three points ensured that the club remained in sixth place in the Championship and inside of the playoff positions.

Praise was universal for Holmes after the game with Derby manager Frank Lampard adding: “There is a lot more to come. His natural pace, ability and desire makes him invaluable, and he is improving all the time.”


Holmes told ASN in November that he is pushing himself hard for his first ever U.S. national team call-up and if he looks sharp over the next month, it would be hard for new manager Gregg Berhalter to justify leaving the Georgia-born Holmes off.

U.S. international Tim Weah made his debut for Celtic on Saturday in a Scottish Cup match against third-tier Airdrieonians. He came off the bench and scored his team’s final goal in the 83rd minute in a 3-0 win at Celtic Park.

It was a very low level of semi-pro competition but Weah’s run and finish were nice. It likely gave him a stage for more playing time.


Making an entrance! Debut and first goal for Tim Weah with @CelticFC! ????????????pic.twitter.com/HzuO6oOoYD

The big test for Weah will be in the weeks ahead but there is no question it was a nice start to his time in Glasgow.

All over for Miazga and Nantes?


Matt Miazga’s loan from Chelsea to Nantes has been ugly over the past three months. While it is not official, this quote seems to lay the foundation that Miazga might part ways with the club before January. It’s pretty ugly when a manager says this publicly and it gets aired on the club’s official channels.

But then where will Miazga go? It is likely that Vitesse would happily take him back – so his floor is pretty high. But things need to happen quickly. Things seem to have deteriorated quickly at Nantes and there is little point staying – for either party.

Huge win for Yedlin and Newcastle

A lot of American players won this past weekend but few were as important as DeAndre Yedlin and Newcastle United coasting to a 3-0 win over Cardiff. Entering into the game, Newcastle was in 18th place and the top relegation spot. Meanwhile, Cardiff City was one point ahead of Newcastle and in the final spot of safety. If Newcastle wants to survive this season in the Premier League, these are exactly the games it has to win. These games against other lower teams are far more important than playing against the league’s elite teams.

But Newcastle took care of business with a convincing 3-0 win to move out of the relegations spots.

Yedlin, 25, put together a vastly improved performance from last week’s loss against Chelsea. The Seattle native went the distance and was effective moving forward and was a rock defensively. It was an important game and Yedlin showed up.


In a big game against Wolfsburg, McKennie got the start for Schalke while fellow U.S. national team veteran John Brooks was in the backline for the guests.

It was a tale of two halves for McKennie who was not good in the first half where he struggled to get anything going. In the second half, however, the Texan was vastly improved as Schalke began to play much better.

With the game 1v1, McKennie rounded out his strong half with the game winning assist. Even more impressive than the actual assist was the run up the gut of the Wolfsburg defense. Schalke hasn’t had the season it wanted in the Bundesliga but this win pushes the club into 12th place and nearing the top 10 of the Bundesliga.

Pulisic sharp off the bench


The most highly anticipated game for American fans this weekend actually turned into being a little bit of a letdown as both Christian Pulisic and Tyler Adams were on the bench as fourth place RB Leipzig hosted Bundesliga leaders Borussia Dortmund.

Pulisic actually came off the bench in the 75th minute with Dortmund up 1-0. While he did not take part in any scoring and the game would end 1-0, Pulisic was sharp and lively. It is promising to see him make the most of his chances in the final few months of his Borussia Dortmund career.

Meanwhile, Tyler Adams will have to wait for his Bundesliga debut as he did not get off the bench. With Leipzig trailing and struggling to create chances into the second half, it didn’t seem like the right opportunity. The fact he was on the bench, however, is a good thing.


Ian Harkes, 23, made the bench for Dundee United in the Scottish Cup against Montrose. He came on in the second half and scored his team’s final goal when his stoppage time shot snuck past the keeper from close range.

The fact he got on the field was impressive given that he only joined the team the past week.


Harkes goal in the Cup pic.twitter.com/KmHspF8nZt

But the Cup is not the primary competition for Dundee United. Getting promoted into the Scottish Championship is the big goal and the club is currently in third place. Scotland’s second tier is not a high level but Harkes has a ton of responsibility where he will likely be seen as an important part of the promotional push in the coming months.

This Friday is a huge game for Dundee on the road against second place Ayr United.


Over the past few weeks, it has been a question whether or not Matt Polster would accept an offer to join Rangers or accept an offer to rejoin the Chicago Fire. ASN has learned that Polster is traveling to Glasgow on Monday to likely sign a contract with Rangers.

The midfielder/right back impressed with recent trials in Scotland and comments from the club’s staff and manager Steven Gerrard were all positive.

The loss is significant for the Chicago Fire which is having perhaps the worst offseason of any team in Major League Soccer as players have left the club en mass to either join new clubs or even retire (like Brandon Vincent did at age 24). Chicago does not seem to be a happy place at the moment.


As had been reported for over a week by The Athletic and MLS Soccer, Benfica’s American midfielder Keaton Parks, 21, is joining New York City FC on loan for the upcoming 2019 season and the loan does not include an option to buy.

If he can play regularly, it will be a good move for the Texan who made a pair of performances for Benfica’s first team last season but has been mostly featuring for the reserve team. At this point, Parks has done all he can for Benfica B and needs a step up and consistent playing time.


Alfredo Morales, 28, is sometimes forgotten among American fans. The German-born midfielder struggled to fit into the national team under Jurgen Klinsmann and hasn’t received a chance in a long time. For his club career, it’s been off and on where he has floated between the top of the 2.Bundesliga and the lower Bundesliga.

This year, Morales lost his starting spot with Fortuna Dusseldorf but recently earned it back. On Saturday he had a game-winning assist in the second half of the club’s 2-1 win over Augsburg to move it seven points clear of the relegation zone. The newly promoted club is red hot and has now won four games in a row.


Here is video of the 89th minute winning assist from Alfredo Morales on Saturday pic.twitter.com/7OSkveErhe