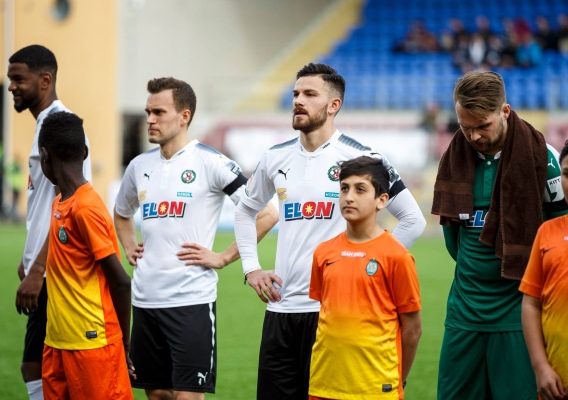 Orebro's Brendan Hines-Ike is a player not frequently talked about among American fans but the Colorado native has emerged as one of the best defenders in the Swedish Allsvenskan and now is the subject of transfer rumors this summer.
BY Brian Sciaretta Posted
June 05, 2018
5:00 AM
WHEN LOOKING AT the current group of younger American players, one of the more promising positions is central defense. Matt Miazga, Erik Palmer-Brown, and Cameron Carter-Vickers are all signed to three of England’s biggest teams. John Brooks, when healthy, is an established player. Domestically, Walker Zimmerman and Tim Parker are among the best in MLS.

Quietly—and not on the radar of many American fans—Örebro SK’s Brendan Hines-Ike is putting together a nice résumé as one of the best defenders in Sweden.

Currently in his third season at the club, Hines-Ike, 23, has earned very positive reviews for his performances this year as Örebro SK sits in fifth place.

“The season has gone quite well,” Hines-Ike told ASN from Sweden. “I think it's better than anyone was expecting. For myself, I am just very comfortable now within the team and I've taken that step in terms of where I am no longer getting used to the league and I am not a [prospect]. Now I have to show that I can play and be involved in big moments. I think I've taken a more leadership role within the team.”

Like many Americans before him, Hines-Ike played college soccer before he made the move abroad. When he was nine he trialed at the Nottingham Forest academy in England. While the club offered him a spot, it was only on a one-year deal, which wasn’t enough to entice him and his parents to make the move. So instead, he returned stateside to develop in traditional channels of MLS academies and college.

While many Americans are now bypassing the college game, Hines-Ike believes it helped him in certain areas, although when he turned professional, adjusting from the short collegiate season to a 10-month season was difficult.

“I was always so focused when I was younger to become a professional as fast as I could,” Hines-Ike recalled. “I was actually so fortunate to end up having to go to college because I was so close to signing for Chivas USA when they were still a club and I was in their academy. I think one year later they fell apart. I think that was such a lucky thing because if I stayed, who knows what would have happened? I would have been out of job and I wouldn't have been eligible for college.”

“The college game is difficult,” he added. “The big thing, and I wouldn't ever say the level isn't good enough, is sometimes I think it is great for young players because sometimes is a great way to learn how to play the game with pace and there is a brutal physicality with some of the teams you play against.”

Not long ago, the Scandinavian leagues were home to promising young American players who were seeking to start their professional careers. Some would never rise any further than these leagues while others like Alejandro Bedoya and Charlie Davies eventually secured deals in top European leagues.

In recent years, however, the number of American players in Scandinavia has sharply declined. This is due to several factors such as an improved MLS—with many of its teams signing more players through homegrown rules—and with clubs in countries like Germany now pursuing Americans in greater numbers.

Hines-Ike’s path to Sweden took some luck. He played his first three years of college at Creighton but decided to transfer to the University of South Florida for his final season. He trained with Scandinavian teams in the summer before his final college season as opposed to playing PDL soccer stateside (as Hines-Ike said: “It was part of the deal I had with South Florida that they allowed me to train in Europe during the summer because it's something I always wanted to experience.”)

Hines-Ike was training with Danish and Norwegian teams but Örebro SK extended a late invite after hearing about him through mutual contacts. Initially, Hines-Ike was reluctant because it was the end of the summer and he had been in Europe for two months, but he eventually decided to go.

After two weeks of training at Örebro SK, the club informed Hines-Ike that it was going to try to sign him in December after the NCAA season. Sure enough, the team called him two days after South Florida’s final game and the two sides negotiated a deal.

Coincidentally, Örebro SK was the first club Alejandro Bedoya played for after his standout collegiate career at Boston College and Bedoya remains popular with supporters to this day.

“A lot of people were excited to have another American coming here,” Hines-Ike said. “It draws a lot of attention because not a lot of Americans are coming to this league….But I am my own player and I don't live in his shadow. It's such a gold mine over here for young players to develop and that's why I chose Sweden. They give the young players a chance and they have an open mind for letting the young players play.”

But his success in Sweden is not going unnoticed either. Örebro SK plays a very modern style where Hines-Ike has been able to play any of the three central defense positions in a five-man backline that features two attacking wingbacks.

In May, the club acknowledged that Hines-Ike could be on the move soon, with reports indicating Holland. Coincidentally, this could be facilitated with an Irish passport – for which he has applied through his Irish-born grandfather (and he believes the process is in its final stages).

“He is one of the most talented central defenders in the Allsvenskan and he is doing well now,” Örebro SK technical director Magnus Skoldmark said recently. “There is interest from other clubs.”

Hines-Ike is reluctant to talk about the interest from other clubs, although he points out a club must be the right fit.

“First and foremost it's an honor,” Hines-Ike said of the interest from Holland. “Some of the clubs that now know my name in Holland, I would have never expected. I would never have expected people there to be in a boardroom now talking about me. But it's not a distraction. I am a focused person.

“The tough thing is that I do have a good life in Sweden and I am happy here,” he added. “I do understand that I've moved here for a reason to keep progressing with my career. Whatever happens next, I know that it's a right step for me. I am not looking to rush to get out just to move on. I am looking for the right decision and the right move because it's important. I'm only 23 and the next four years in my development are crucial. I want to make sure I get it right.”

A move to the Eredivisie or a similarly big league in Europe will likely boost Hines-Ike’s visibility in the United States. Among national team players, Matt Miazga recently played two seasons in Holland and Erik Palmer-Brown finished a half season in Belgium with both players on loan from Chelsea and Manchester City, respectively.

Hines-Ike is comfortable flying below the radar, for now, and he believes that his play will end up speaking for itself.

“I think in Sweden we kind of create our own little world and everyone talks about the league here,” Hines-Ike said. “It's tough to follow what players the people are talking about back in America. To be honest, I believe the play will eventually speak for itself. If I do move onto a bigger league, of course that will draw attention. That time will come. I don't want to be noticed for the wrong things. I want to be noticed for play. If the play hasn't gotten me noticed yet, that's just a sign I need to up my play.”