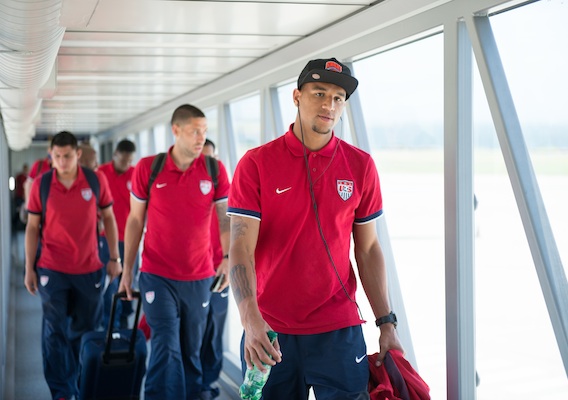 Here's What They're Saying About Terrence Boyd

The 23-year-old German-American forward has yet to score for the U.S. national team but he is already beloved my legions of fans. ASN's Laura Greene goes On the Record to discover why.
BY Laura Greene Posted
May 18, 2014
9:03 PM
NAMED TO JURGEN KLINSMANN'S 30-man pre-World Cup squad, and with 20 goals to his name for Rapid Vienna during the 2013-14 season, the outlook looks increasingly bright for Terrence Boyd. So too do opinions of the 23-year-old. In a climate where trolling and negativity are often hot on the heels of rational thinking, Boyd seems immune to venom-spewing types. The public, it must be said, absolutely adores him. It’s nearly impossible to find a single bad comment about the striker. But what is it—apart from his goals—that people have warmed to? Here, we take a closer look.

Born in Bremen, Germany, to an American father and a German mother, Boyd has represented the United States at the U-20, U-23, and senior levels. A dual citizen of the United States and Germany, Boyd moved to New York as an infant before returning to Germany with his mother when his parents divorced. There, he began his footballing career with Hertha Berlin, where he came through the ranks before moving to Borussia Dortmund’s reserve team in 2011.

Big words from Klopp on Terrence Boyd @TBoyd91. He's on the verge of breaking into a truly elite club at a position the #USMNT needs badly

Dortmund reserve team coach David Wagner, a former United States international and fellow German-American, told ESPN’s Jeff Carlisle on September 6, 2012: “Terrence is strong in the work with his body. He knows were the goal is, and he is able to fight for the team. He has to work on his combination game, on his technique to have a better first contact. If he works hard in the future, he can step up to the highest European level, like the German Bundesliga, Premier League, or Serie A.” After making 32 appearances and scoring 20 goals for Dortmund’s reserve side, Boyd was snapped up by Austrian Bundesliga team Rapid Vienna in July 2012, on a three-year deal. This came five months after the forward had made his senior debut for the U.S. men’s national team, where he was brought on as a substitute in a 1-0 friendly win against Italy on February 29, 2012. A month later, Boyd was in action for the U.S. U-23 team, which was attempting to qualify for the London Olympics. A 3-3 draw with El Salvador was not enough for the U.S. to progress. However, punched in the face by a Salvadorian defender and with two goals scored, it was an eventful game for Boyd.

Terrence Boyd: he scores goals, he takes punches to the face, he bleeds, he hits on girls on Twitter. America is going to love this kid.

Boyd had plenty to say after the match:

For us, it’s a nightmare right now because we’re the team that had the most quality in CONCACAF, in my opinion. It’s just a bad day for us, but we have to keep going. I’m proud of my team, and for the first time I really felt what it’s like to fight for your country. It was an amazing game for the fans, I think. Unfortunately, we didn’t qualify for the Olympics. Life goes on, and I’m sure we’ll see a lot of these guys at the World Cup in Brazil.

Following his Olympic disappointment, Boyd went on to make a handful of further appearances for Klinsmann’s senior side, in both friendlies and World Cup qualifiers. When called up, Boyd was the only player in the U.S. camp who was not playing first-team football with his club. “If you look at it like that, it’s really surprising,” Boyd told MLSsoccer.com in May 2012. “I’m just happy that they recognize me and my work and now I just want to rock this thing.”

“Look at when we inject Terrence Boyd into the line-up; while unspectacular against Antigua and Barbuda, you saw a player against Scotland and Brazil who will out-hustle every player on the field,” commented Eleven Bravo on the Bigsoccer.com message board. Back in Austria, Boyd’s first outing at the Gerhard Hanappi Stadium could not have gone any better. On July 21, 2012, the striker put away two goals and one assist in his Vienna debut against Wacker Innsbruck. Not surprisingly, he was crowned Man of the Match for his efforts.

A brace for @tboyd91 in his Rapid Vienna debut. Extraordinarily promising for #USMNT http://t.co/oGsaWro1

During the rest of the campaign, he bagged a further 11 league goals, not to mention one in Europa League qualification, two in the tournament proper, and one in the OFB Cup. Seventeen goals in 42 appearances—not bad for his first season at a new club.

Feel like Terrence Boyd is just a ticking time bomb ready to explode for #usmnt. ( in a good way)

The six-foot-two forward also received glowing feedback for his decision to get a Stars and Stripes tattoo, inked in April 2013.

Ahead of the 2013-14 campaign, Boyd was already in fine form. His pre-season bicycle kick, scored against AS Roma, was a thing of beauty.

Terrence Boyd already has his first goal for Rapid Vienna, and it came on a bicycle kick against Roma and a pretty peeved Michael Bradley.

In the second game of the Austrian league season, Boyd was back on the scoresheet with a brace for Vienna, scored against Wiener Neustadt. He missed out on three of the side’s next four games. However, after returning to action on September 1, Boyd promptly returned to goalscoring form—registering five goals in seven games for Zoran Barisic’s team. It was perhaps inevitable that Boyd had started to turn heads around Europe, the striker linked with a move to Premier League side West Ham and Serie A sides Udinese and Lazio, according to rumors reported in the Express on September 22. On October 16, in a vital World Cup qualifier against Panama, Boyd earned even more respect for his actions on the pitch. It wasn’t a goal and it wasn’t an assist (although he did bag an assist for Aron Johannsson’s 94th-minute winner). It was an act of sportsmanship, when Boyd hugged Felipe Baloy, consoling the losing Panama captain after the final whistle. Comments that followed this American Soccer Now article by Jon Arnold saw Boyd heralded for his behavior: Cuban_B: “Watching a grown man reduce to tears for giving everything he has and losing out of his dream is: moving. Then watching another player (and opponent no less) realize this and share in that heartbreak is: awe-inspiring. Boyd went up a lot in my book. He could have just walked off the pitch and no one would have noticed. But he saw a warrior reduced to tears and decided to share in that pain (however briefly) instead of instantly immersing himself in glory.” W added, “This pictures speaks volume of Boyd as a human being. To think that Boyd was on the other end once before, when the US failed to make the Olympics. He knew exactly what Baloy was going through.” SumOakTrees wrote, “This is what this country is about, glad to see a new American embrace it.” In November 2013, Boyd was again called up to the U.S. for friendlies against Austria and Scotland. Elsewhere, he was adding to his goal tally for Vienna, with four goals registered in three games in the Europa League. Ahead of taking on Austria’s national team in familiar surroundings at the Ernst-Happel-Stadion in Vienna, Boyd spoke to Brian Sciaretta in The New York Times: “I think I am one of the most patriotic guys on the team. I just love the country. I love the passion. If it’s a World Cup qualifier or a friendly, one of my favorite moments of every game is the national anthem. To have the honor to represent the whole country is crazy.” In Sciaretta’s article, U.S. coach Klinsmann added: “It’s an exciting moment for Terrence. He’s a young player that is extremely proud to play for us. When we brought him in a year-and-a-half ago into Italy for his first time with us, he came from the fourth division. We already followed him. We saw his qualities and we saw his willingness to learn. He’s still in the middle of that process. He’s learning every month. We can see it in his eyes he’s excited.” Yet to score for the U.S. in 13 appearances for his country, Boyd ended the 2013-14 season in fine form for Rapid Vienna. He scored 20 goals in all competitions, and registered six in the last four games of the season.

Six goals in four games for Terrence Boyd, and 20 on the season in all competitions. Certainly making his case. #USMNT

@MLS He could be really special for us. Potential: More talented version of Altidore IMO

The Austrian Bundesliga season ended on May 11. On the following day, Boyd was included in Klinsmann’s preliminary 30-man roster.

Such a big honor to belong to the 30 best players of the United States of America! #humbled #cyclopsisready

"[My family] is really excited," Boyd told MLSsoccer.com. "My stepdad told me an old German saying: 'You have no chance, use it.' I'm going there with minimum expectations. It's a dream come true. "If I could make the World Cup team, I would be the happiest guy in the world. Anything I could do to help the team would be my job. If I am on the bench, for a friendly, for a World Cup game, I would just try to work my ass off and score goals. "If it didn't work out this time, I would be sad, sure. But I would still be thankful for what Klinsmann did for me. He made an international team player when I was still in the reserves of [Borussia] Dortmund." United States' #1 Fan commented, “I think Boyd could translate his success very well into this next World Cup. He's got raw talent, BUT, he also has 20 goals this season for his club. If he can translate his game onto the USMNT, he's going to be man to watch in Brazil.” Colby Henderson added: “Boyd is basically a backup for Altidore. But as you said, Wondo changes the way we attack and think. Whichever Jurgen sees as more useful. Truthfully, i would take Boyd at this point.” And Adam Snavely typed, “Even if he never does anything important in a U.S. shirt, I will always love Terrence Boyd. Incredibly proud to represent the U.S., always excited, 100% teamer and always puts in his work. Beyond his years in terms of understanding his position and taking nothing for granted.” Will he make it into Klinsmann’s final squad of 23 and board a plane to Brazil in June? Facing Germany, the country of his birth, on June 26 in Group G, would certainly cap off an exciting year for the striker. What do you think of Laura Greene's On the Record series? And how do you feel about Terrence Boyd's prospects for Brazil? Would you like to see him in the squad? Share your thoughts below.