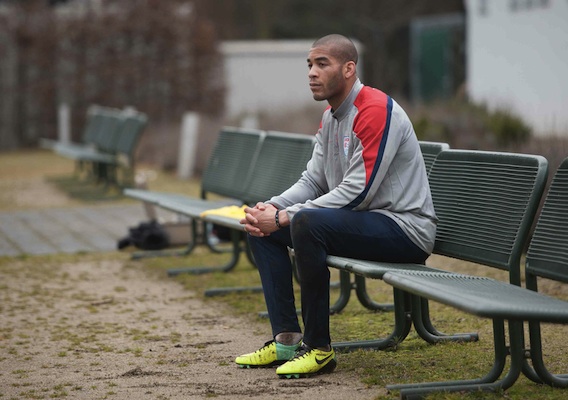 Here's What They're Saying About Oguchi Onyewu

The 31-year-old defender believes he has one last World Cup in him, and Onyewu's steady play for Sheffield Wednesday could help his cause. Laura Greene gathered the latest scuttlebutt on Gooch.
BY Laura Greene Posted
April 10, 2014
9:55 PM
HE HAS 69 CAPS and two World Cups under his belt for the U.S. men’s national team, yet it came as something of a surprise when Oguchi Onyewu was called up for last month’s friendly against Ukraine. Onyewu is currently plying his trade at Championship side Sheffield Wednesday, which he joined on a short-term deal in January 2014. Early skepticism greeted his arrival among some sections of the club’s supportors but after 13 appearances in the second tier of English football, how is the 31-year-old being received? Here, we look back at how Onyewu found himself playing for the Owls, how he is performing, and what people are saying about the D.C.-born defender. Prior to joining Sheffield Wednesday, Onyewu had appeared in just 27 league games for five teams, across five different countries, since the start of the 2009-10 campaign. His travels across Europe took in spells at sides including AC Milan, FC Twente, Sporting Lisbon, Malaga, and Queens Park Rangers. With Malaga, Onyewu played twice in La Liga last season, against Real Sociedad and Real Madrid in 2-1 and 6-2 defeats, respectively. His stay at La Rosaleda took in three Champions League ties, against Zenit St. Petersburg and Anderlecht and one minute on the pitch against AC Milan. Onyewu enjoyed slightly more playing time in the Copa del Rey, where he played 90 minutes on four occasions, scoring two goals for Bernd Schuster’s side. The former Metz, Standard Liege, and Newcastle United man entered a short period of unemployment after returning to Sporting Lisbon following his loan spell with Malaga, until Queens Park Rangers picked him up in October 2013. On QPR fan site Wearetherangersboys.com, messageboard user qpr said, “What a signing, this guy is a top centre half,” upon Onyewu’s arrival. AttheBeach added his own frank assessment of the Hoops’ new signing: “Gooch won't back down to anyone as illustrated by his training ground fight w/Ibrahimovic while at Milan, and is built like a tank. He gives an honest effort every time on the pitch, but to be fair in the few times I've seen him since the knee injury he has appeared robotic and a shell of what he used to be.” There were rumours at the time that QPR manager Harry Redknapp had spoken to Jurgen Klinsmann about Onyewu’s chances at the 2014 World Cup.

Harry Redknapp says Jurgen Klinsmann called him about Onyewu, adding "almost certainly going to be in his squad for the World Cup" #USMNT

Whether the speculation was intended to raise the player’s stock ahead of a January move, it's impossible to say. However, in his time at Loftus Road Onyewu did not play a single game. He was sent on a free transfer to Sheffield Wednesday on January 11, 2014. “Wished he'd been given a chance,” wrote Hoops fan Macmoish on qprreport.com. “Good luck to him.” When talk of a move to Hillsborough was being mooted, Silverguy commented on Owlstalk on January 10, “68 games in over 6 years? No thanks.” GHS took a different view, “He has played at a very high level. I for one will not write him off by any means. Good luck, hope you are a shrewd signing.” “You can't be a terrible player and play for the clubs he has,” added Bluesteel. “Rusty perhaps but you'd hope he is able to improve our squad.” Elsewhere, on January 11, commenting on an article on ESPNFC.com, Mathew Thompson typed, “I'd love to see him in the MLS. When fit he is a rock as a defender.” Conrad Wilcox agreed—to a point. “He needs to take a pay cut and come home. use the offseason to get fit, and play MLS, at this point i don't even know if he's a consistent starter at home. he should've come home a long time ago.....michael bradley too early, onyewu too late..."

Up until joining Sheffield Wednesday, Onyewu had not played 90 minutes at club level for more than a year. Since January, he has had a good run of games—playing 13 times and completing 90 minutes in all but one of his appearances in both the league and FA Cup. The 2006 U.S. Soccer Athlete of the Year started brightly with Wednesday. He registered an assist in his first league outing on January 18 against Burnley and scored the decisive goal in a 2-1 FA Cup win against Rochdale on January 25. This result ultimately lead to caretaker boss Stuart Gray being handed the role of manager by club owner Milan Mandaric, with Onyewu named Man of the Match by The Guardian’s Andy Wilson. “For the last eight months, all my decisions have been World Cup-based,” Onyewu told SI.com on January 20. “I feel as though in the last three-and-a-half years I’ve had some setbacks with injuries. But I’ve recovered well … Even though I hadn’t played in a long time, I think the few games I played last summer with the national team [at the Gold Cup] showed I can still compete on that level for sure." “For me, it’s about climbing up that hill, and as long as the hill is still there and I can see the top, I’m still up for the climb. The World Cup is the mountain I’m climbing right now.” On January 25, Benjamin C had this to say on soccerbyives.com: “Whether or not he makes the World Cup squad is immaterial for me. I am simply glad he is finding some early success at Wednesday and I hope it continues. Kudos to you, Gooch.” Following a 1-0 league win against Barnsley on February 1 and a run of four games without defeat, Wednesday fan Smithy01 wrote on Owlstalk.co.uk, “Onyewu—quality and will only get better with increased fitness, won just about everything in the air and such a great touch for a defender.” On February 4, when Klinsmann answered a Q&A session on USsoccer.com, he claimed that the door to the World Cup was not shut on Onyewu. He said: “Players like Oguchi Onyewu, Tim Ream, and Danny Williams…. You have to give them a clear message that only if you pick up a rhythm and play week-in, week-out, will you complete one of the big keys in order to make the World Cup roster… “The door is still open until May. It’s about what happens over the next couple of months. We coaches are going to do our homework as well. We are going to put the puzzle together of hopefully 23 players that are totally committed, that are not only giving everything they have, but that also mix well together… There are many different elements that play into the roster and therefore the door remains open until the very last day.” By the time Onyewu was back on the field in the U.S. national team jersey to face the Ukraine on March 5, Sheffield Wednesday—buoyed by a new manager—had lost just two out of eight Championship games with the American on board.

INTERNATIONAL: Oguchi Onyewu will represent the USA as they face Ukraine in Larnaca, Cyprus on Wednesday #swfc pic.twitter.com/zr7CB21Oqm

The defender’s previous run-out with the national team was the 90 minutes that he played in the 6-0 friendly win against Guatemala in July 2013. Before that, it was in the CONCACAF Gold Cup, where Onyewu captained the U.S. in its 4-1 win against Cuba, en route to the final. Onyewu told SI.com on March 3: “I’m hoping that [Klinsmann] does look to me as a leader in the camp. Being one of the few people that have been in the program for so long, myself with Tim Howard and Clint Dempsey, we’ve gone through two World Cup cycles and you know the work that’s involved, you know the work that’s needed to get the results you want to achieve. I definitely feel that he knows my value in terms of my experience and what I can contribute. Right now it’s up to me to display that and repay that confidence that he has in me.” Onyewu’s performance alongside John Brooks against the Ukraine did not receive glowing praise. As commenters on a match report by ASN’s Blake Thomsen wrote: Suzanne Sand: “Worst: Altidore, Jones, Kljestan, everybody in the back. Best: Anyone who didn't play in this awful game. If the players who played from the start today is the bulk of our starting eleven in Brazil, we are toast.” Capitan macpatton replied: “I agree that Altidore was, once again toothless. Castillo played really crappy. But Onyewu and Brooks were the worst. ?I believe that with such an out of sync bunch of players it is hard to organize and even harder to get results...” Back in England, Onyewu bagged an assist when facing former employers QPR on March 18, in a tie that ended 3-0.

No doubt a good feeling for Oguchi Onyewu to have an assist in a 3-0 win vs QPR, the former team that didn't play him.

Onyewu will be 32 by the time the World Cup kicks off on June 12. In the same month the defender’s current contract runs out at Sheffield Wednesday. But he appears to be enjoying his football in Yorkshire. As told to the Sheffield Star on March 22: “The last few years, with injuries and being at different clubs, have been difficult for me but I’ve been able to push towards progress and success. A lot of hard work and dedication has been put in, and I think right now the club, myself, and everything else around me is reaping the rewards of that. I’ve played in two World Cups, but every one is like your first. The atmosphere in Brazil is going to be unreal, unforgettable; to be a part of that would be something special.” And, it seems, Sheffield Wednesday fans would like to keep hold of the journeyman defender a little longer. As NeilHayz commented in the Sheffield Star: “Most fans are happy that we've seen some spirit and passion from a team of determined players and Gucci has been a big part of that. Play offs? Very, very unlikely! Gucci and [Glenn] Loovens signing new contracts? Yes please! Hopefully not so unlikely...” Perhaps Onyewu’s interesting career has one chapter left in it yet. Will it include a return to the MLS? How about a third World Cup? Let us know your thoughts below. Laura Greene is an American Soccer Now columnist. Follow her on Twitter.