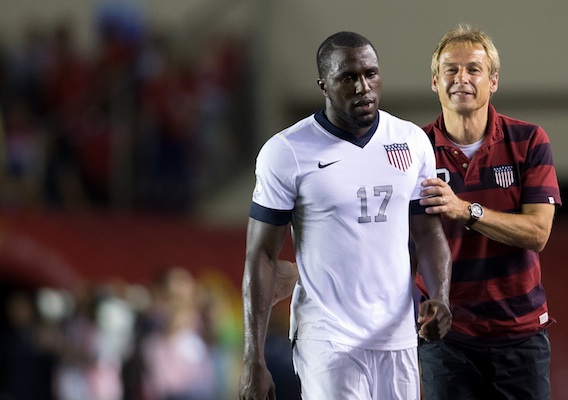 Here's What They're Saying About Jozy Altidore

Is the 24-year-old New Jersey native out of his depth at Sunderland? Enduring a run of terrible luck? A victim of poor service? Laura Greene researched what folks are saying, and has gathered it here.
BY Laura Greene Posted
February 05, 2014
4:42 PM
WELL INTO HIS SECOND run in the English Premier League, Jozy Altidore has so far struggled to establish himself as a top threat in England's top tier. However, he does play for Sunderland—a team that seems to have an aversion to doing things the easy way. After signing for the club seven months ago, Altidore has seen firebrand manager Paolo Di Canio depart, Kevin Ball act as caretaker, and Gus Poyet brought in as the Black Cats’ new boss. Since June the club have brought in a whopping 18 new players, while the likes of Simon Mignolet, Stephane Sessegnon, and Ahmed Elmohamady have been sold on to do very well elsewhere in the top flight. Yes, there has been a lot of change at the Stadium of Light. Altidore came to Wearside from Eredivisie side AZ Alkmaar, where he racked up 23 goals in 33 appearances during the 2012/13 season. No stranger to the northern reaches of the UK, Altidore had previously played for Hull City, where he failed to make a lasting impact. Apart from, that is, on Alan Hutton—who was head-butted by Altidore in a crucial top-flight tie against Sunderland.

When Altidore came on board, Di Canio was effusive in his praise for the striker. The Italian manager told Sunderland’s official website on July 13, “Altidore is one of the top strikers in Europe. He only joined us on Tuesday but I’m very happy, curious, and excited because I have a very good attacking side at the moment.” Others were a little more tentative:

Sunderland fans will be hoping that Jozy Altidore has improved rather markedly. 1 goal in 28 league games last time in England.

Four games into the Premier League season, Altidore was yet to find the back of the net, apart from a “goal” which was controversially ruled out against Arsenal on September 14. “The whys of Altidore's lack of goals this season are painfully obvious,” said Jason Davis on ESPNFC.com on September 18. “At Sunderland, the American is isolated up top, tasked with holdup play on a team that rarely manages long stretches of possession. Service has been lacking, to put it kindly. Paolo Di Canio’s Wearside revolution looks more like a polite throat-clearing.” With his side bottom of the league and many stories of dressing room unrest making the rounds, the death knell was ready to sound on Di Canio’s time in charge. After picking up just one point from five games, the Italian was fired and Ellis Short’s team were on the lookout for its sixth permanent manager in five years.