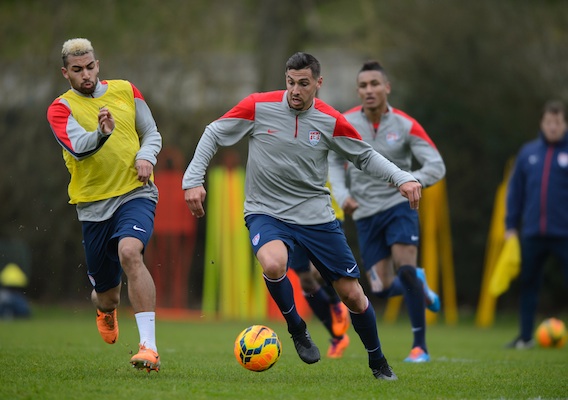 Here’s What They're Saying About Geoff Cameron

Is he a fullback? A central defender? A midfielder? Does it matter? The 28-year-old Massachusetts native tends to earn raves wherever he plays. Laura Greene went on a listening tour. Here's what she heard.
BY Laura Greene Posted
March 05, 2014
10:02 AM
OVER THE COURSE of 18 months, 69 games, and two managers, Geoff Cameron has become a mainstay for Premier League side Stoke City. As one of few American players currently playing regularly in a top European league, the 28-year-old appears to have slipped seamlessly into English life since making his switch from Houston Dynamo in August 2012. Cameron has missed just one top-flight game all season. He has scored against Arsenal. And he has proved instrumental in victories against Chelsea, Manchester United, and the aforementioned Gunners. He is currently ranked No. 6 in the ASN 100. Life looks rosy in Staffordshire for the Massachusetts native, whose versatility has seen him play in a variety of roles for the Potters. However, Cameron’s ability to play as a fullback, center-back, and defensive midfielder is not always as advantageous as it may seem, and has actually seen him come in for equal measures of criticism and acclaim. Here’s what people are saying about Stoke’s No. 20.

Back in August 2012, Cameron made his debut for the side against Arsenal, holding Arsene Wenger’s team to a 0-0 draw while playing in a defensive midfield position.

With a Man of the Match award, Cameron’s first foray into Premier League football couldn’t have gone been better. He was well received, as seen on Chief Delilah’s Stoke City Conclusions: “I like the potential he showed as a classy midfield spoiler. He always looked to use the ball intelligently and—unlike Wilson Palacios up to now—seemed more au fait with what was expected of a typical Pulis ‘cage dweller’ in terms of positioning. No player on the pitch made more tackles, interceptions, and blocks than our new American signing. That is a very positive sign.” For Stoke’s next two games, Cameron remained at center-half, recording two more points in respectable draws with Wigan Athletic and Manchester City, before being moved into a fullback position where he would largely remain for the rest of the season. It was, he admitted, a position in which he had little experience, telling The Stoke Sentinel on October 4: “I'm not used to playing right back, but over the last couple of weeks I have been watching videos and trying to learn. “The timing is different from playing center-back or center midfield because there are different angles and also different ways you have to step up or drop off. That's what I have been working on over the last few weeks and I think I am getting more comfortable.” On October 16, 2012, U.S. men’s national team coach Jurgen Klinsmann told Brian Sciaretta, “We are very, very pleased with Cameron’s development. He came in for the first time in January camp and I was impressed. He told me: ‘I want to go to Europe. I want to make it.’ I told him what it takes to get there and what to do. He’s very hungry. “I think he still has a lot of room to improve. Playing in the Premier League day in and day out will form him. It gives him another level.” Cameron appeared in all but three top-flight fixtures in 2012-13 and Stoke finished the season in 13th place. However, the side won just two of its final 12 games and would soon to lose its manager of seven years, Tony Pulis, as he and the club parted ways by “mutual consent." During the offseason, Cameron pondered what kind of a role he would have under his new manager—former Blackburn Rovers, Manchester City, Fulham, and Queens Park Rangers boss Mark Hughes. “I was either playing right back or defensive center midfield last season,” Cameron told The Stoke Sentinel on July 13, 2013. “I was never given the opportunity to play center-back because I guess Tony Pulis didn't see me there, or he didn't want to play me there, even though he could see me in that position with the national team, which I thought I played really well. "But he had his guys that he trusted and chose, so he never really gave me the opportunity at center-back. So it'll be interesting to see what happens when I go back to Stoke." Under Hughes, Cameron began the 2013-14 season precisely where the last one had left off, at right back. Coincidentally, it was again against Arsenal that Cameron shone for his side, in the fifth game of the current campaign. Stoke may have lost 3-1 at the Emirates Stadium, but the American defender got on the score sheet in the 26th minute. Geoff Cameron on his first Premier League goal.

Geoff Cameron is an excellent footballer. Too quick to catch, too clever to outwit, too strong to be harmed by standard issue munitions.

The following day, Stoke fans celebrated their American goal-scorer. As Robo51 commented on the Oatcake Fanzine messageboard, “He was without doubt a knight in shining armour on Sunday. I thought he was superb.” Miles Offside added: “Geoff had a great game yesterday. Really getting to grips with that RB spot.” Yeswilko typed: “Cameron has been at the heart of a lot of good attacking moves this season, he's settled well and getting better with each game. Gwaaarn Geoff lad.” While appearing in every minute of every game (with the exception of Stoke’s scoreless October 19 fixture against West Bromwich Albion) in the Premier League, Cameron was also appearing for the United States men's national team in friendlies against Bosnia Herzegovina, Austria, and Scotland. Against Austria, Cameron played right back and the U.S. lost. In the other two games, with Cameron used as a center-half, the U.S. recorded a win and a draw. It was at around this time that Klinsmann suggested that Cameron needed time in central defense.

On Geoff Cameron: Klinsmann really wants him to force himself into Stoke lineup as a starting center back. Says it's up to Cameron to do it.

A month earlier, Cameron had surprisingly stopped talking to the media:

Geoff Cameron does himself no favours not speaking to media. Looks precious and egotistical whatever his reasons. Needs to at least explain

Re Geoff Cameron, I just don't understand his silence. Was always charming and helpful in past as are the rest of an ego-free USA team

Something that was later put down to fatigue, as he told ESPN’s Doug McIntyre on September 30: “It was nothing against the media or anyone in particular. There was a point in the summer I was just mentally fatigued coming off of 18 months of nonstop play, then joining up with the national team for three or four weeks, and I decided the best thing was to control what I could, put my head down, and stay focused.” As 2013 drew to a close, Cameron was earning rave reviews for his performances at right back under Hughes. On December 21, Cameron bagged his first assist of the season, in an important 2-1 win against Aston Villa. After the contest, Steve Davis of NBC’s ProSoccerTalk.com, had this to say. “Cameron had a big day down the Stoke City flank, nearly scoring early, getting in on the first goal, and then supplying the cross for his team’s winner.” “Here’s the deal: playing right back this year for Mark Hughes is apples and oranges compared to playing as an outside back last year under defensive specialist Tony Pulis. Hughes told Cameron he would enjoy playing right back–and the big U.S. international certainly seems to be doing so, stretching those long legs regularly along the right flank.” On the back of four games without defeat, Hughes singled out Cameron for his strong play. “Geoff's done really well,” Hughes told Sky Sports. “I think he's shown everybody that he's an accomplished football player, first and foremost, and he has the ability to play in different positions. "Obviously he's played mostly for me at fullback and done that very well. He's a real part of our attacking threat as well with his ability to join in high up the field.” "His versatility is great from my point of view because I can move him around and you know you're not going to lessen the side because he can make an impact wherever you pick him."

During the holiday season, however, Stoke suffered a string of poor performances. The club went winless in six matches, losing five of those contests and conceding 11 goals in the process. Cameron’s culpability in this stretch became a hot topic on message boards. “He’s the kind of player you want that wins the ball, can get up and down, and plays it simple. I’m starting to wonder whether right back is the position for him, despite looking one of our better players this season,” commented Onemanbang on Oatcake Fanzine on January 18. A 1-0 FA Cup loss against Chelsea on January 26 did little to help matters, and some cynical Stoke fans turned on Cameron. “We need a proper right back. Preferably one that can cross the ball. Cameron isn't a right back,” said Unknown182 on the Oatcake Fanzine board, following the Chelsea game. MysticalDescent added, “He can't cross and he can't defend to save his life, but aside from that he's wonderful.” Voices of reason were present too: “Wow, a few weeks ago we were praising him for being brilliant. Now look at you all! Today he played against one of the best wingers in the world in Hazard with very little or no support,” typed Howedy. Meanwhile, rumors linking Cameron with a move to Sunderland appeared during the January transfer window.

Sources are telling me Sunderland did in fact approach Stoke about buying Geoff Cameron but it was declined. Cameron is happy at Stoke.

And results started to improve, beginning with a confidence-boosting win against Premier League title-holders Manchester United. Since its 2-1 victory on February 1, Stoke has lost just one match—against free-scoring Manchester City. And Cameron has appeared in every minute of every game in 2014, leading some to question his status as a “fringe player” with the U.S. national team.

So Geoff Cameron starts/goes 90 in almost every game for a team in a top euro league and he is still considered a fringe #USMNT player?

As Cameron told Sciaretta in The New York Times this week: “I’m playing in one of the best leagues in the world. The best players in the world are playing here in the Premier League. That’s good for my confidence. I feel like I am here for a reason, because I’m a good enough player to play in this league and be a consistent starter every week.” And that consistency will no doubt lead to a World Cup roster spot. Will he play fullback for Jurgen Klinsmann? Central defense? In the midfield? All three? That remains to be seen. As one fan said on Twitter:

Geoff Cameron has seriously been immense this season! #scfc #Stoke

This is Laura Greene's fifth On the Record piece for ASN. Share your thoughts on Geoff Cameron, and his optimal position, below.