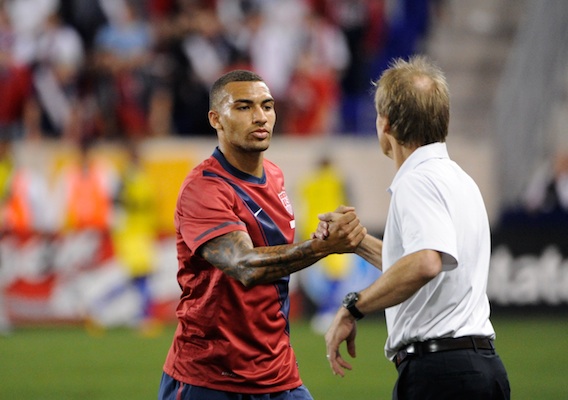 Here's What They're Saying About Danny Williams

Despite injury setbacks, U.S. international Danny Williams has been making steady progress with Reading and has his sights set squarely on the 2014 World Cup in Brazil.
BY Laura Greene Posted
April 22, 2014
10:07 AM
INJURIES ARE A FAMILIAR foe to 25-year-old German-American midfielder Danny Williams. Progression, followed by setback. Rewind and repeat. It’s been the story of Williams’ career so far.

However, last month Williams won his first international cap since November 2012 and—with more games under his belt in 2013-14 than in any other season over the last five years—perhaps things are changing for the better. Here we take a look at Williams’ life before Reading, how he was initially received at the club, and how Royals fans’ perceptions have fluctuated over the last nine months. Born in Karlsruhe, West Germany, Williams began his football career with Karlsruher SC before moving to SC Freiburg in 2004. He spent seven years there, working his way up through the youth and reserve ranks and making 16 appearances for the senior team. His last Bundesliga campaign with Freiburg was derailed somewhat with a meniscal laceration, which reduced his playing time to just 15 games in all competitions. In August 2011, Williams moved to fellow Bundesliga side Hoffenheim and went straight into the first team, racking up 28 games in his first season at the club.

Danny Williams is having solid season. Scored his 1st of the year for #readingfc today. Easy to see him a big part of the #usmnt next cycle

On February 19, Hayes wrote on Royalsrendezvous.co.uk, “Seems a bit of an unsung hero to me, having now actually watched a whole game, twice, he looks one hell of a powerhouse player. Now I may be wrong because I admit to only seeing him on the Telly but to me he looks like one of Adkins' best buys. Anyway this Yank looks like a player I might get off the sofa to watch one day.” “It's taken a while for him to settle. Was a bit of a headless chicken at first, but now he's looking very good!” commented Tilehurstsouthbank. “Growing into a great player, think it took a little time for him to settle here and his long injury over Autumn didn't help, but he seems to be improving with every game, a massive presence in midfield, gets about everywhere, never stops running, makes some great driving runs, good with his feet and finding the scoring nack now. Hope he continues in this way,” said Royal Crisp. On February 22, Williams gave an interview to the Daily Star and had plenty to say:

“Every player wants to play in the Premier League and the World Cup—I am no different. If I can achieve both, I could easily look back and say the year 2014 was the best year of my life. It would mean everything to me. “When you have the opportunity to play at the World Cup you have to do everything possible to be included. I always said that when I was fit again and can rely on my strengths then I could make it into the US team. “Before my injury I was part of the national set-up quite a lot and unfortunately I suffered a bit at the beginning of the season. It was hugely frustrating that injury prevented me from playing, but at the moment I am happy, confident and looking forward to the next five months.”

In late February, Williams received his first international cap in more than 13 months. U.S. coach Klinsmann said in a statement, “This game is a huge opportunity, mainly for our European-based players, for those guys to prove to us that they are eager and hungry. With this game being the only chance for these players before our World Cup preparation camp begins, it's even more important they have a good showing." Williams featured in 11 minutes of the 2-0 defeat against the Ukraine on March 5. Commenting on an MLSSoccer.com article after the game, U.S. fan Bryan Girkins wrote, “Beckerman still has the edge, but he should be worried. Williams is more athletic and much quicker. Still a great passer and can shoot from far out. The guy is in great form.” Unfortunately, by March 8, Williams was injured. Again.

Danny Williams not in the 18 again for Reading today vs. Leeds. He is out with a knee injury. #usmnt

Five games on the sidelines were followed by a return for Reading in a 1-1 draw against Huddersfield on March 29. This was swiftly followed up by 90 minutes against Charlton Athletic in a 1-0 win away from home. Who scored the solitary goal? Danny Williams. Who—if any doubts remained—cemented his place in Royals fans’ affections by scoring an excellent driven shot with his right foot, followed by a jump into the travelling fans to celebrate his goal? It was the side’s fifth win in a six-match unbeaten run away from home, which put the club sixth in the Championship. Williams received a small fine and a yellow card for his goal celebration. “I don’t mind. If it means I can score a goal, I will jump into the crowd and the manager can fine me, I’m happy with that,” Williams told the Reading Chronicle on April 7. “Saying that, I will talk to him. It was just emotional. I’m a very emotional guy when it comes to football. That’s why I’m always saying how important it is that the crowd is behind us. I am a player who really recognises the impact it can have, I feel it on the pitch.” Teammate and club captain Jobi McAnuff told the club’s official website, "He's a real powerhouse in midfield, he drives forward with and without the ball. He's got energy, he wins his tackles, we were delighted with his goal and he took it well.”

And here's to you Danny Williams, Reading love you more than you'll knowwww, whoaoooooooooo

There are three games left to go in the Championship season and, injury permitting, Williams will play a huge part as Reading chase promotion to the Premier League via the playoffs. His inclusion with the U.S. team this summer remains to be seen but one thing is clear: Danny Williams is on the up. OK, after reading this, what's your take on Williams? Do you see him in the 30-man provisional roster? On the 23-man World Cup team? Give us your take below. Laura Greene is an American Soccer Now columnist. Follow her on Twitter.