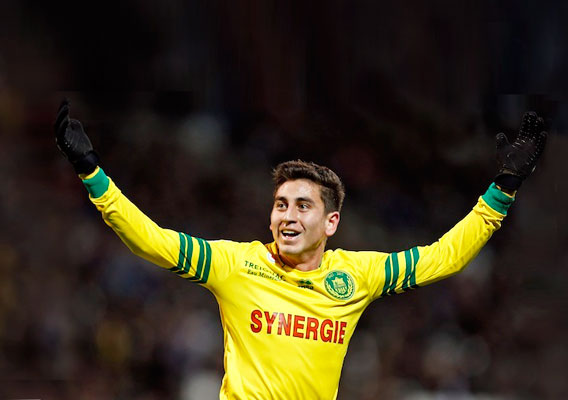 Here's What They're Saying About Alejandro Bedoya

After MOTM game on Tuesday, Alejandro Bedoya with another goal today for Nantes vs Marseille. Will he be starting for the #usmnt vs. Ghana?

The joy of scoring never gets old!! One of the best feelings!.. But most important we got a huge win and 3 points away at Marseille in the Velodrome!Merci a #FCN supporters pour le soutien! :) Bien joue les gars! ;) @filip_dj @elzipanos @s_gkp13 @toure60 @vince_bess @papydjilo @aristi9 @vizcarrondo4 @erwinzelazny @issa6sok

3 - Only Carlos Bocanegra has scored more goals (4) than @AleBedoya17 (3) among American players in Ligue 1. Pioneers.

In the final 15 games of the season Bedoya grabbed another two goals and turned in six full 90-minute performances as the 2013-14 campaign came to a close. Next up: the 2014 World Cup. Bedoya featured in all four games for the U.S. men’s national team in Brazil and, later, FIFA.com reflected on his performances for the United States men’s senior team: “His performances in the summer of 2014 put Bedoya on the map. A roving presence in midfield, his technique is superb for such a hard worker. U.S. fans, who travelled to Brazil in waves and tuned in in record numbers to watch on TV back home, took this relative newcomer to their hearts. ‘I was walking around New York City after the World Cup, such a huge place, and someone shouted out ‘‘Hey Bedoya,’’ he said. “I was shocked. It’s so humbling.’ ”

Bedoya went straight back into Der Zakarian’s lineup for the first game of the 2014-15 Ligue 1 season, a match against RSC Lens on August 9. Out of the next 15 games, he went gave two 90-minute performances, started four additional fixtures, was subbed on five times, and was unused for four. Bedoya discussed the World Cup on the U.S. Soccer Federation's site on November 11: “Two-thousand fourteen is a year I will never forget. It’s been crazy to think that I‘ve been able to solidified myself in Nantes and then be with the national team and play in the World Cup—which was my dream as a kid. Three years ago I wasn’t even part of the national team. Knowing that now all of my hard work and dedication has paid off and my commitment paid off to get to a World Cup, and then playing in it, it’s been very special.” Five days later, it was announced that Bedoya was a finalist for U.S. Soccer’s Male Athlete of the Year, alongside Kyle Beckerman, Clint Dempsey, Fabian Johnson, Jermaine Jones, and eventual winner Tim Howard. Back in France, however, Bedoya was in and out of Der Zakarian’s side. A goal against Paris Saint-Germain at Parc des Princes on December 6—well, that changed everything.

Shame about the loss to PSG but happy to have opened my scoring account in Ligue 1 this season in Paris. And you know I had to add a little bit of a salsa dance to that goal!???? Thought I could maybe steal the show but some guy named Zlatan decided to. ???? Merci pour votre soutien. #Ligue1 #FCN #Nantes #Paris #PSG

Nantes’ opening goal was cancelled out by two strikes from (who else?) Ibrahimovic but Bedoya remained in good spirits, posting on his Facebook page: “Shame about the loss to PSG but happy to have opened my scoring account in Ligue 1 this season in Paris. And you know I had to add a little bit of a salsa dance to that goal! Thought I could maybe steal the show but some guy named Zlatan decided to.” This analysis followed on Ligue1.com: “Bedoya's post-World Cup experience was something of a let-down. The attacking midfielder was frequently left on the bench as Nantes enjoyed a fine start to the current campaign, but his fortunes have changed since his stunning goal away to Paris Saint-Germain.” Bedoya added: “The reality is I haven't had that much of a break so you feel tired here and there. It is how it is, we're not robots. But after that goal against PSG—I hadn't been playing that much, before I'd been playing more as a sub—things turned. It's amazing what a goal can do for someone's confidence, right?" After his 90-minute, golazo-scoring appearance against PSG, Bedoya went the full 90 in Nantes next game against Bordeaux, bagging an assist for Jordan Veretout in the 2-1 win. He also started his side’s next two games, ahead of wrapping things up for the winter break.

#Photoshoot for our club #FCNantes!! We got our game faces on and I'm representing for my hometown Weston, FL throwing up the W! ????Ready for the season to start this weekend! #GameFace #FCN #Ligue1 #Reprise #CestLaVie

Named Nantes’ Player of the Month in December, Bedoya was name-checked as a fan favourite in Get French Football News on December 27: “Der Zakarian’s tactical nous this year has been nothing short of astounding. Switching fluidly between a 4-4-2/4-1-4-1 with the wings pushed forward to create space behind the strikers and a 4-2-3-1, the fluidity and variety of looks in attack that Nantes have displayed is truly remarkable for the mix of freedom granted the attacking players, whose hard work has became its own reward. Neither Serge Gakpe nor Alejandro Bedoya had previously been considered the grafting type, but both the Togolese and the American have become fan favorites, working hard on the wings, along with Stuttgart loanee Johan Audel.”

After making two appearances in both the Coupe de la Ligue and Coupe de France over the winter period, the Ligue 1 season restarted on January 11, with Bedoya playing a full 90 minutes against FC Metz and 86 minutes against AS Monaco before being dropped to the bench for a January 24 fixture against Montpellier. Returning to the side on January 31, Bedoya received 18 minutes of game time in Nantes’ most recent outing, a 1-1 draw with LOSC Lille. Now, new contract in hand and 54 games (in all competitions) into his career at Nantes, Bedoya stands out as one to monitor closely as he continues to progress in Europe. Coming up soon on Nantes schedule: Zlatan and Co. in the Coupe de France on February 11. We’ll be watching. Laura Greene is a frequent ASN contributor. Please follow her on Twitter.