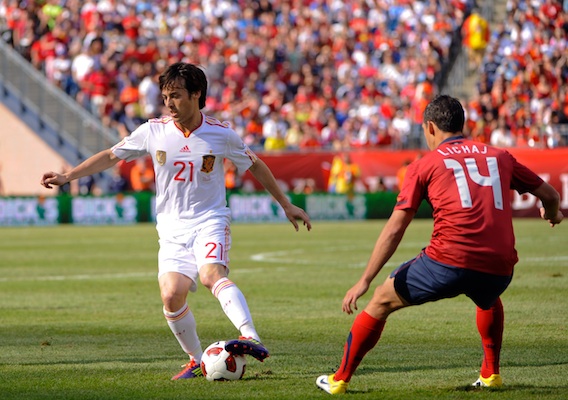 Here's What People Are Saying About... Eric Lichaj

The 25-year-old fullback had to wait 16 months for his chance to impress U.S. coach Jurgen Klinsmann. Did Lichaj make the right sort of impression? ASN's Laura Greene follows the quotation marks.
BY Laura Greene Posted
January 22, 2014
2:43 PM
SEVEN MONTHS INTO HIS two-year contract with Nottingham Forest, Eric Lichaj’s career is moving in the right direction. And yes, the right people are starting to take notice. The Illinois-born fullback was released from Premier League outfit Aston Villa last June, so he dropped down a division in search of regular first-team football and a potential spot in Jurgen Klinsmann’s World Cup squad. Called up for the first time by Klinsmann in November, how has the defender managed to force his way back into contention for a spot in the U.S. national team? In this recurring feature, we look back on what fans, coaches, and players have to say about Lichaj’s development. The 25-year-old joined Villa in 2008, where he came through the youth and reserve setup and went on to make 42 appearances for Paul Lambert’s side, taking in loan spells at Lincoln City, Leyton Orient, and Leeds United along the way. He had his ups and downs during this spell, but mostly Lichaj made a positive impression. In December 2010, he showed what he was capable of doing, against top players. "Lichaj will be remembered most fondly for taming Gareth Bale at Villa Park in December 2010," Mat Kendrick wrote in the Birmingham Mail, "even though Spurs won 2-1, while limiting Eden Hazard in a defeat by the same scoreline to Chelsea a fortnight ago proved to be a decent farewell display."

On Villatalk.com in January 2012, Villa Roy echoed these sentiments, saying that Lichaj "kept Gareth Bale as quiet as a mouse." More of the same from Cay on Forestfans.net: "Good player. Would have him in the team before [Alan] Hutton. More defensive than offensive. Had Gareth Bale in his pocket when he played against Spurs. Despite some impressive showings in the English top-flight, Lichaj was out in the cold when it came to international football. His last appearance coming under former coach Bob Bradley in the 2011 CONCACAF Gold Cup Final. Perhaps Lichaj’s reputation became tarnished in 2012/13, after he was part of a Villa defense that conceded the third-highest amount of goals over the course of the season. The two teams that conceded more, Wigan Athletic and Reading, were both relegated from the Premier League. Whatever the reason, questions were raised in some quarters about Lichaj’s absence from the U.S. national set-up. As ESPN: The Magazine’s Doug McIntyre tweeted on June 2:

When Villa released Lichaj on June 5 he was described by The Birmingham Mail’s Mat Kendrick as a “discarded defender.” However, a large number of Villa fans seemed reluctant to see the American depart. “Villa should have tried keeping on to him,” wrote fan Stian Lie Hagen on June 9, in an open discussion on The Birmingham Mail’s website. “He is a very decent back-up, and seeing as he comes from the academy, most likely a cheaper option then what we need to go out and get now. I wish him the best of luck, and hope we see him in the Premier League again soon,” he added. “Personally I would have kept him, very useful backup player. Good luck to him,” wrote Dublin Villian on avillafan.com. Those who disagreed were still effusive in their praise for the 25-year-old, as seen in this comment from Dsjw on avillafan.com’s fan forum. “I agree, good player. Only, it was obvious when he played hat [sic] he wasn't PL's type of fullback. He encourages Lowton and Bennett to make those runs and crosses, that Lichaj wasn't capable of. Any team looking for a flat back four, will count themselves lucky to pick him up on a free. Good luck Lichaj.” A positive energy seems to pervade any discussion that relates to the full-back’s career in the United Kingdom. Rather than attracting abuse or detrimental comments in online discussion, Lichaj seems to inspire nothing but goodwill. This is rare in modern-day soccer—especially in England. “Good luck to him. Never let Villa down. Perhaps not quite Premier standard..yet...maybe with more regular football. I know Leeds fans loved him when he was on loan there.” Said krfeskivilla on Forest.vitalfootball.co.uk when Lichaj signed for Nottingham Forest. “Decent signing. I live up in Leeds and all of their fans I've spoken to have spoke favorably of him. Sensible, solid, steady signing,” said Danny on Forestfans.net on June 19. Jamie Smith added via the comments section in The Birmingham Mail: “Tries hard, but his ball retention is not good at all—he gives it away a great deal. Could never fault his effort though, but I don't think he's PL standard. Would do well in the championship though. Wish him well.” And even,

As far back as August 2010, comments could be found questioning one of Lichaj’s key attributes—his versatility.

Eric Lichaj signed a new 3-year deal with Aston Villa. Kid (21) is making great progress. If only he were a left back instead of right back.

Obviously aware of the weakness some time ago, the naturally right-footed fullback began to make his left a priority in training. In September 2012, Lichaj spoke to The Birmingham Mail on the topic of becoming a two-footed player: